Woman’s Crochet ‘nest’ Has Kept Hornets Away For Years 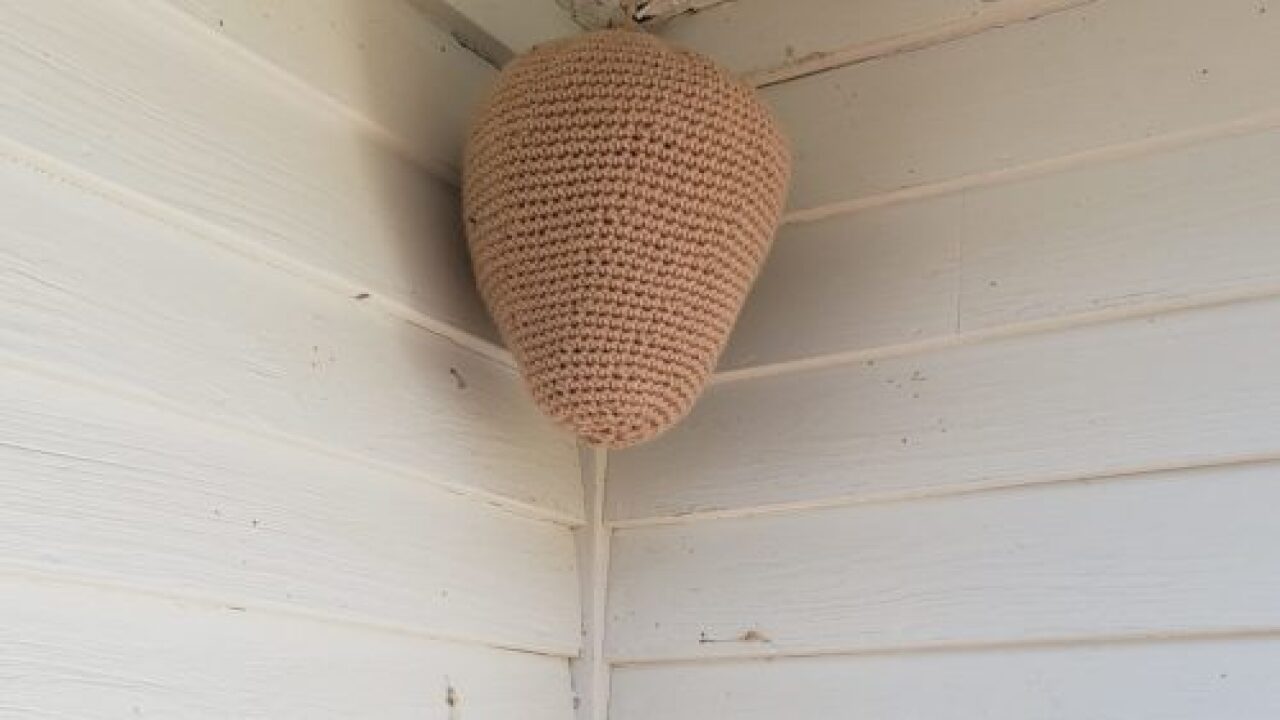 Four years ago, Sandy Kendall Dennis had a major pest problem at her house. She would walk out of her front door and see a huge hornet’s nest hanging in one of the corners of her porch. No matter how many times she got rid of it, eventually, the pesky insects would start the rebuilding process.

Trying to get rid of wasps or hornets can be a challenge. Sure, you can call in an exterminator. That can be expensive, though. Also, not everyone is a fan of using chemicals as a form of pest control.

Dennis knew she needed to find a permanent solution to a recurring problem without resorting to spraying poisons on her home. After some research, she found a crafty way to wipe out the wasps and hornets. What was this mighty weapon? A crochet hook and some yarn! She used these two simple things to make her own hornet’s nest!

It might sound crazy to actually crochet a hornet’s nest to sit on your front porch. But, there seems to be some science behind the stitched hive. A number of hornet and wasp species live in colonies, and they can be very territorial. In fact, many do not like to build a new paper nest if there is another colony within 200 feet.

That’s when Dennis got busy as a bee and crocheted a decoy hornets’ nest. Since putting it outside her home four years ago, she has not had any new hornet colonies taking up residence nearby.

Her Facebook post recently grabbed a lot of attention, especially since the spring weather is starting to bring out all the things that buzz. The post has had more than 18,000 likes, 116,000 shares, and 10,000 comments. Dennis updated the original post to express her thanks to the overwhelming response.

She has also received many inquiries about sharing her pattern or crocheting these decoy nests for sale to others.

“Thank you for all the private messages, over 3,000!” she wrote. “And I am trying to answer them all, so please be patient as I work my way through them.”

However, you should know that researchers are skeptical about this tactic. Canada’s Science World reports that while there are anecdotal success stories about decoy nests, not everyone can expect the same outcome. That’s because there are so many kinds of wasps and hornets with different behaviors and isolation preferences (and it’s not always easy to tell species apart!). In fact, some similar insects, such as yellow jackets, live underground, so decoys like the above might not affect them at all. Variables such as weather and food availability influence success as well.

Still, with such results, others have followed Dennis’ lead and are posting their efforts on social media. @crochetrochelle’s is testing the effectiveness of hers, for example.

Prototype in place. Now to study the effectiveness. #crochetwaspnest #crochetrochelle

And @susko.0 made this one last year but no word yet on whether it’s worked.

When we searched for how to make these, we found a variety of patterns on sites like ThiftyFun.com and Ravelry. If you’re not exactly the crafty type, you can visit Etsy for a variety of ready-made faux hornets’ nests!

Will you try one of these to take the sting out of spring?

This story originally appeared on Simplemost. Checkout Simplemost for other great tips and ideas to make the most out of life.

Related stories
Copyright 2020 Scripps Media, Inc. All rights reserved. This material may not be published, broadcast, rewritten, or redistributed.