Weather news live blog: Latest on the winter storm and its impact on the state 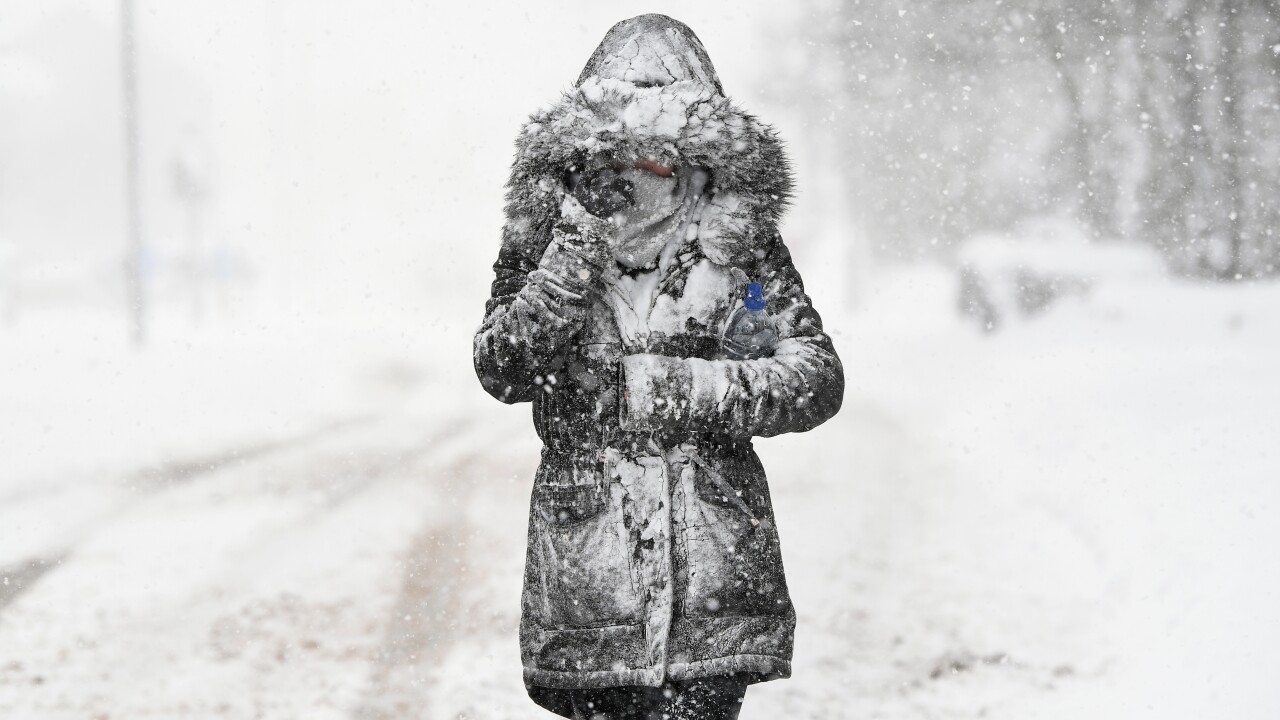 Jeff J Mitchell/Getty Images
BALLOCH, UNITED KINGDOM - MARCH 01: A woman makes her way through the snow on March 1, 2018 in Balloch, Scotland. Freezing weather conditions dubbed the "Beast from the East" combines with Storm Emma coming in from the South West of Britain to bring further snow and sub-zero temperatures causing chaos on roads and shutting schools. Red weather warnings for snow have been seen in the UK for the first time and five people have died as a result. (Photo by Jeff J Mitchell/Getty Images) 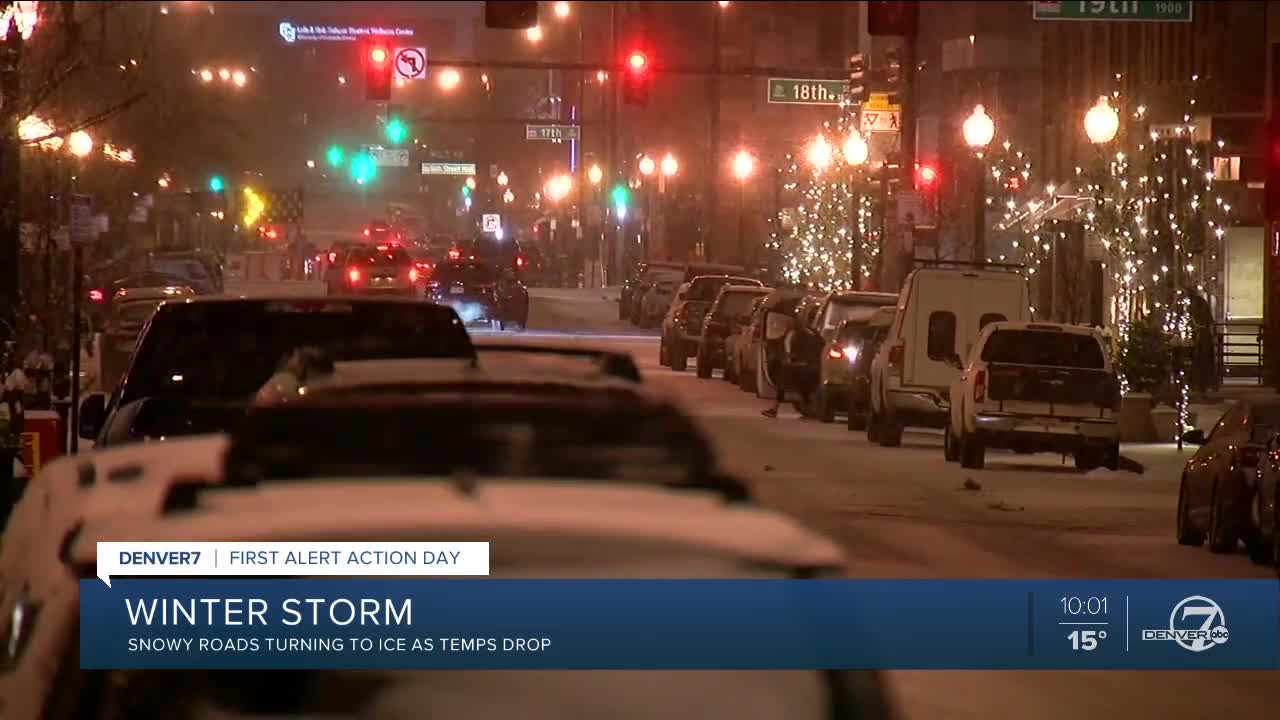 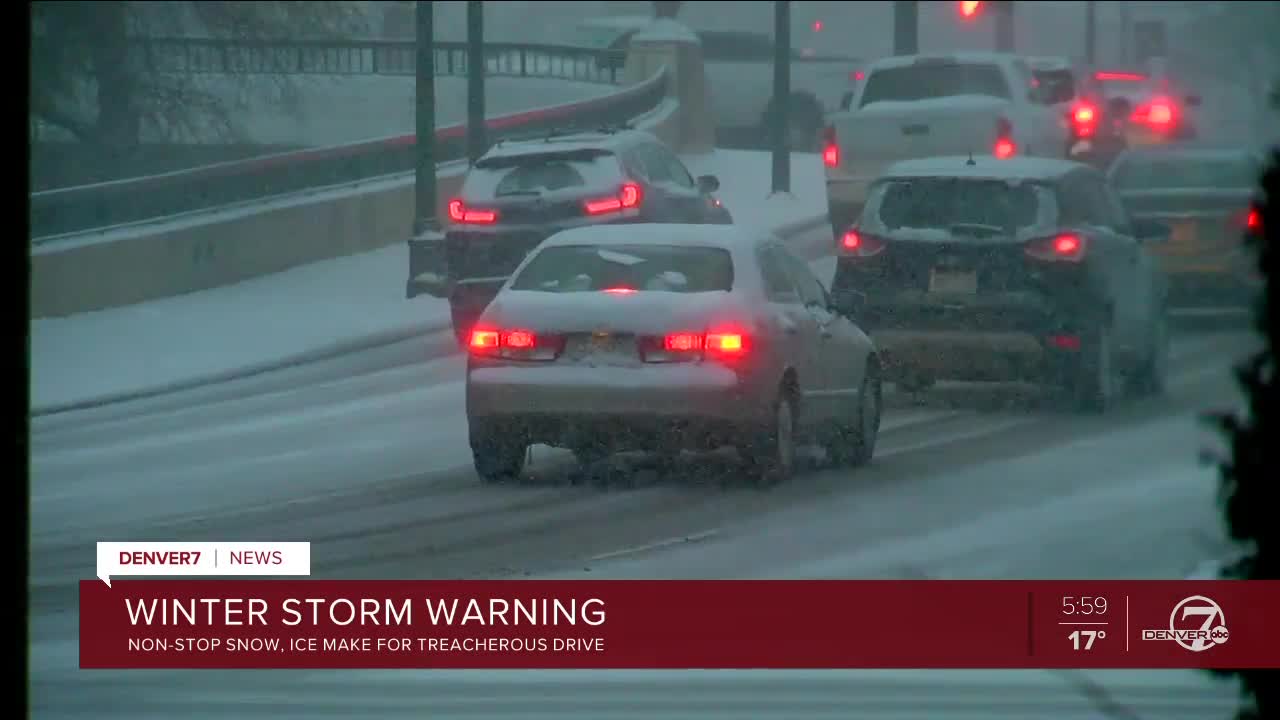 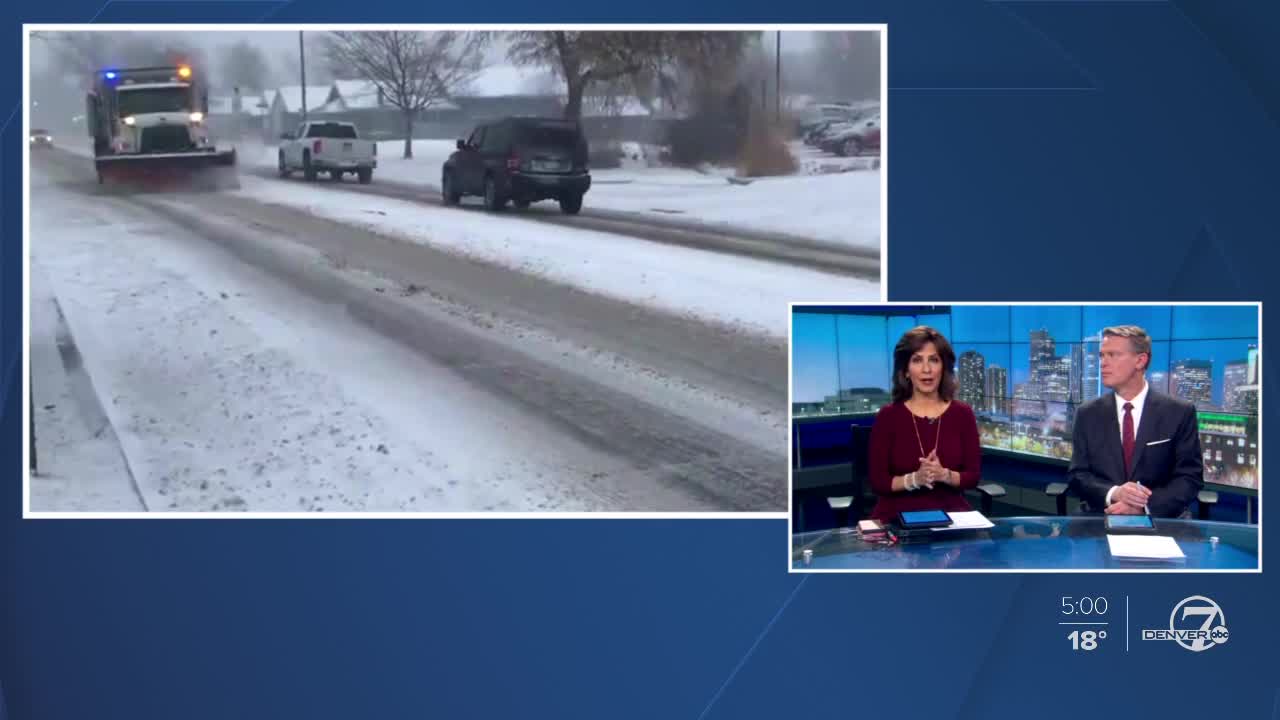 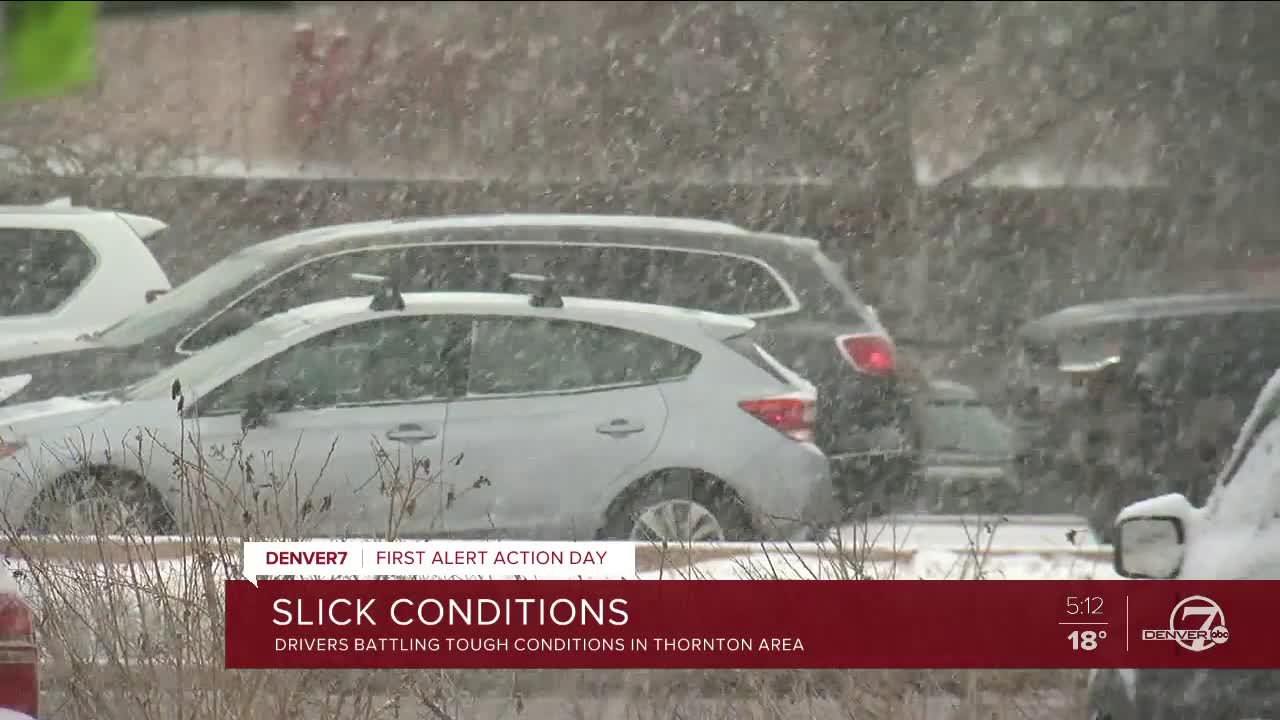 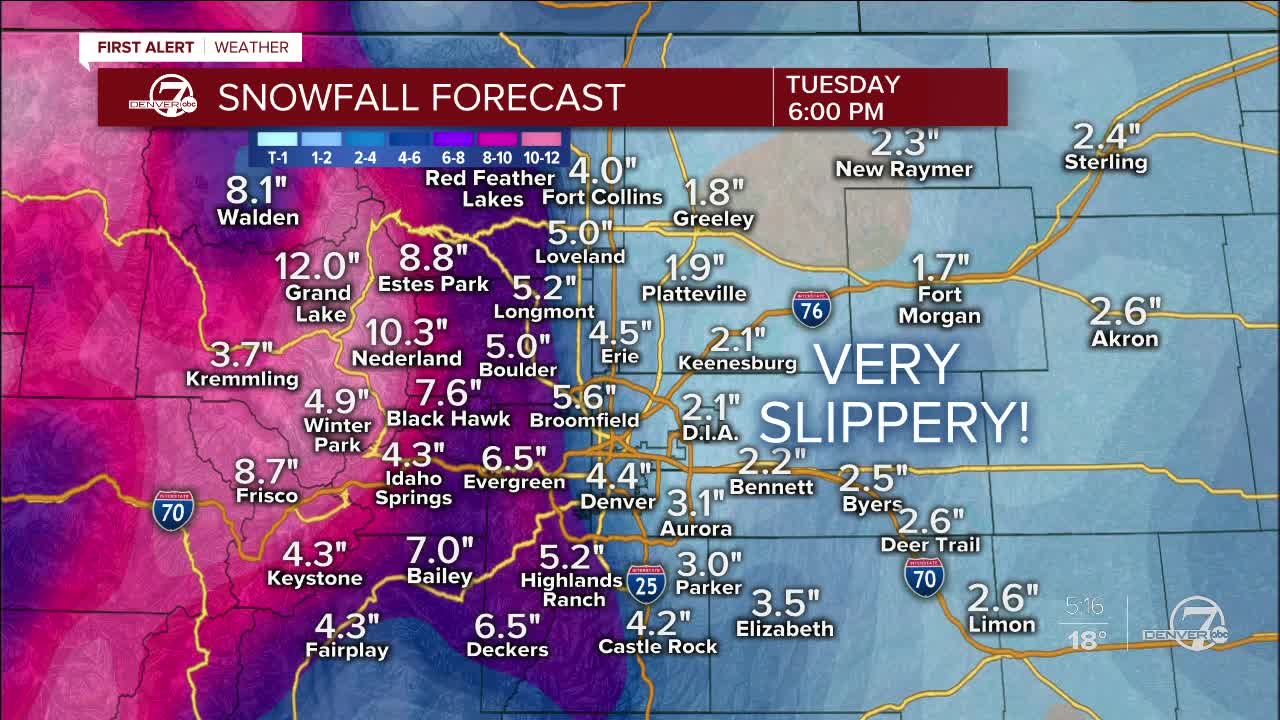 DENVER — A chilly air mass has moved into the state, bringing bitter low temperatures and snow that is expected to accumulate 3-6 inches in the Denver metro area into Tuesday. It's the heaviest snowfall since November.

Denver7 has the latest on the winter storm and its impact on the state in our live blog below:

6:54 p.m. — The eastbound lanes of I-70 east of the Vail Pass Summit have reopened following a crash in the area. Chain and traction laws are now in place, CDOT says.

6:21 p.m. — Westbound I-70 is closed at Glenwood Canyon due to a crash in the area, the Garfield County Sheriff's Office says.

5:25 p.m. — Boulder City offices, including the Boulder Public Library and Bouler Recreation Centers, will have a delayed start due to inclement weather on Tuesday. Offices will open at 10 a.m.

5:09 p.m. — Denver Police reports there have been 17 crashes in a span of 30 mins. They ask drivers to be weather aware as the snowstorm moves through the Denver area this evening.

4:43 p.m. — The eastbound lanes of I-70 are closed east of the Vail Pass Summit due to a crash. There is no estimated time for the reopening of the highway, CDOT says.

4:43 p.m. — Westbound Highway 50 from Purcell west is closed due to multiple slide offs and crashes, CSP Pueblo officilals say. Several troopers are on scene; please remember to move over for first responders.

3:52 p.m. — Aurora City Council meetings that were scheduled for Monday night have been canceled due to weather.

1:37 p.m. — The Colorado Department of Transportation is advising people to leave early from work Monday if possible to avoid the brunt of the storm. They are also asking drivers to avoid or restrict travel on the I-25 South Gap project between Castle Rock and Monument this evening. CDOT said crews are out in force with approximately 100 plows in the metro area alone. Roads were pretreated in advance of the storm and crews are de-icing road surfaces to help with plowing.

10:40 a.m. — The westbound ramp on C-470 is closed heading into Golden because of a semi crash and fuel leak. Colorado State Patrol an extended closure should be expected. Westbound C-470 traffic is being diverted onto eastbound I-70.

10:38 a.m. — The Colorado Springs Police Department said they are investigating a hit and run crash in westbound Bijou east of I-25. It's currently blocking the right lane of westbound Bijou.

9:04 a.m. — Authorities are responding to a rollover crash in the northbound lanes of I-25 between Fillmore and Garden of the Gods. The vehicle is on the right shoulder.

8:40 a.m. — Southbound Quebec Parkway is closed by Highway 2 in Commerce City due to a jackknifed semi truck.

8:37 a.m. — Fort Lupton Fire reports that Highway 52, which closed in both directions for a multi-vehicle crash around 6:15 a.m., has reopened.

8:24 a.m. — CO 402 near Loveland is closed all both directions between Boise Avenue and County Road 9E. CDOT does not have an ETA for the reopening. Use exit 257 as an alternate route.

8:15 a.m. — The crash reported at 7:54 am. on northbound I-25 near 136th Avenue has been cleared. An investigation is continuing in this area for a separate fatal crash from earlier this morning.

8:05 a.m. — A crash has been reported on I-25 northbound at exit 223/120th Avenue. The express land is blocked due to a crash involving multiple vehicles, CDOT says.

7:54 a.m. — A crash has been reported at exit 225/136th avenue along I-25 northbound. The left lane is blocked. This is the same area as a fatal Thornton rollover from earlier this morning. Investigators are still at the scene of the earlier crash.

7:44 a.m. — CDOT is reporting that there is debris in the roadway on US 24 westbound between CO 4/Meadowbrook Parkway and Marksheffel Road.

7:36 a.m. — CSP Limon reports that they were responding to multiple crashes along I-70 east of Denver.

7:13 a.m. — Fort Lupton Fire reports that Highway 52 remains closed in both directions from the earlier crash at County Road 31 and County Road 37.