Copyright 2019 Scripps Media, Inc. All rights reserved. This material may not be published, broadcast, rewritten, or redistributed.
Courtesy CDOT
The Colorado Department of Transportation will close down U.S. Highway 550 over Red Mountain Pass Monday beginning at noon for avalanche mitigation and snow removal efforts.

DENVER – While the Front Range foothills and much of northeastern Colorado got slammed with snow this week — receiving nearly 3 feet in some places — it’s now southwestern Colorado’s turn, where some high-mountain slopes could see up to 5 feet of snow by midday Saturday.

Winter storm warnings went into effect for much of southwest Colorado – particularly the San Juan Mountains – on Wednesday afternoon and will remain in effect until 11 a.m. Saturday.

The National Weather Service Grand Junction office said in its updated forecast Wednesday afternoon that the northwest and southwest San Juans – including Telluride, Ouray, Lake City and Silverton – could see 18 to 30 inches of snow in the incoming storm and winds gusting up to 40 to 50 miles per hour. 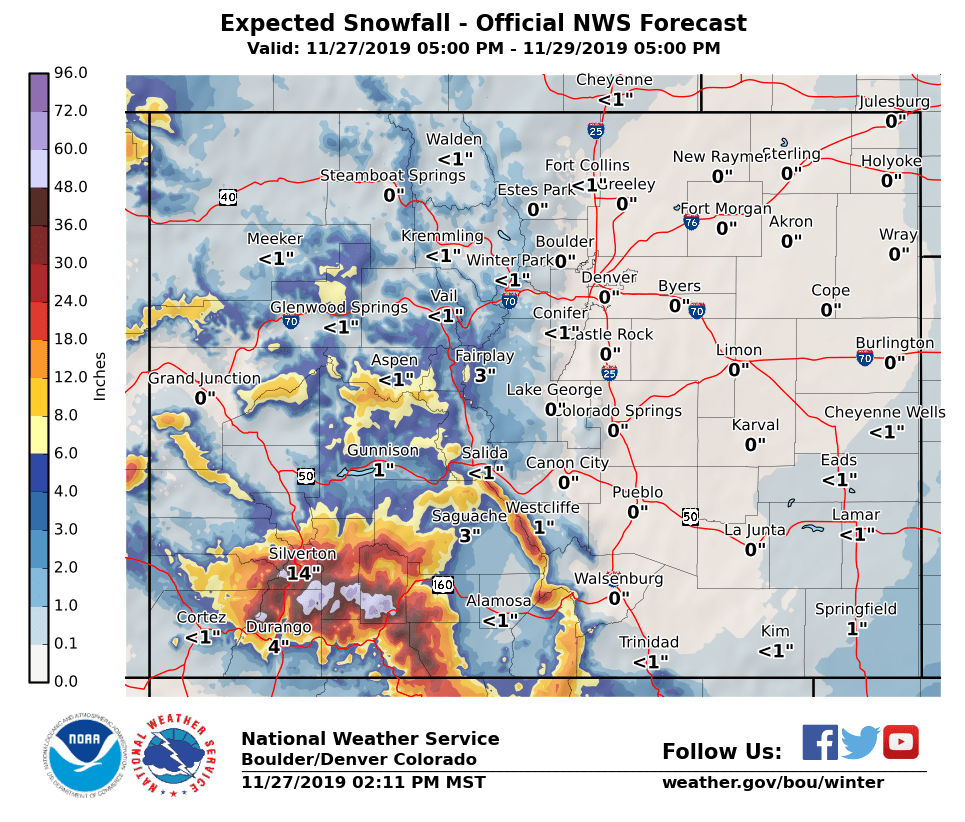 Travel in the area, especially along Highway 550 over Red Mountain, Molas and Coal Bank passes, is expected to be very difficult if not impossible because of the high snow totals and high winds. Wind chills could reach 25 degrees below zero.

Further north, near Grand Mesa, the West Elk and Sawatch Mountains – including Crested Butte and Marble – 12 to 18 inches of snow are expected with similar wind speeds. The winter storm warnings there go into effect at 5 a.m. Friday and will be in effect until 5 p.m. Saturday.

In the Sangre de Cristos, between 6 and 12 inches of snow are expected between 11 p.m. Wednesday and 11 p.m. Thursday.

Many areas of eastern Utah are also expected to receive at least a foot of snow in the storm.

The storm won’t be much of a snow producer for the Front Range, where less than an inch is expected in most areas. The central and northern mountains could see between a trace and 6 inches in most areas.

It should be a boon for southwest Colorado, which has crept into a severe drought stage over the past several months, and has not seen the higher levels of snow so far this season seen in the central mountains and along the Front Range.