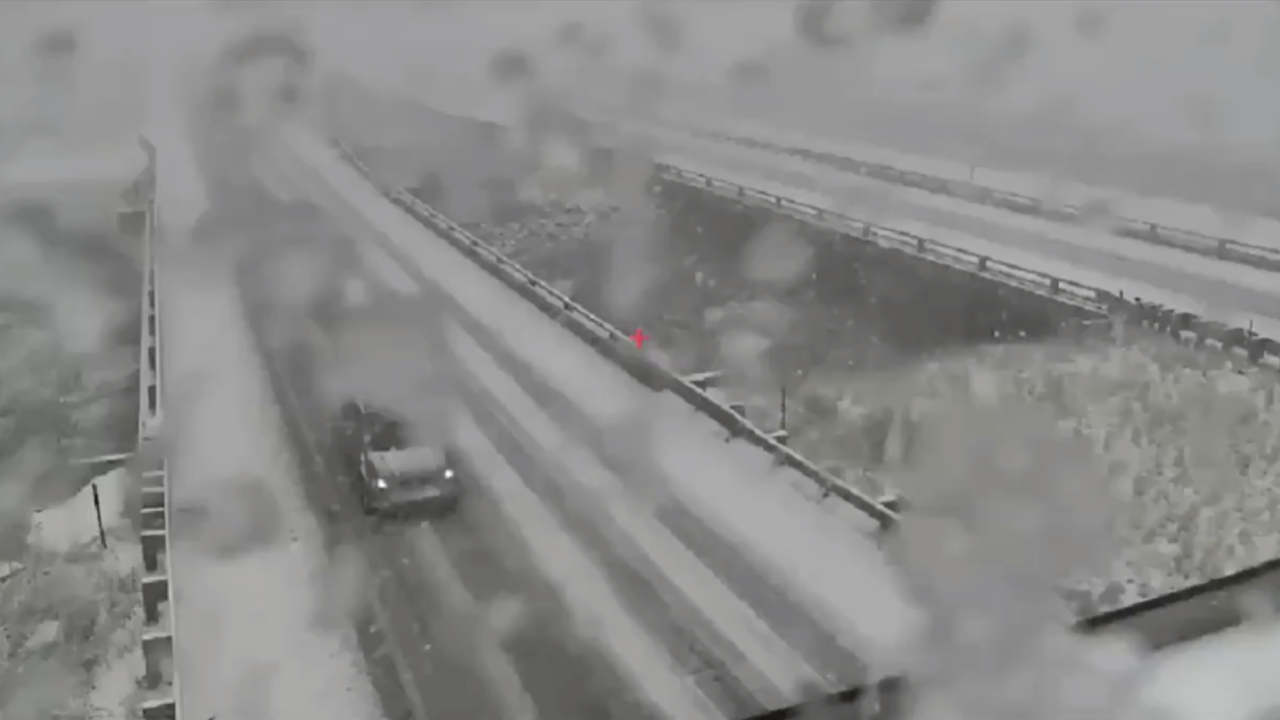 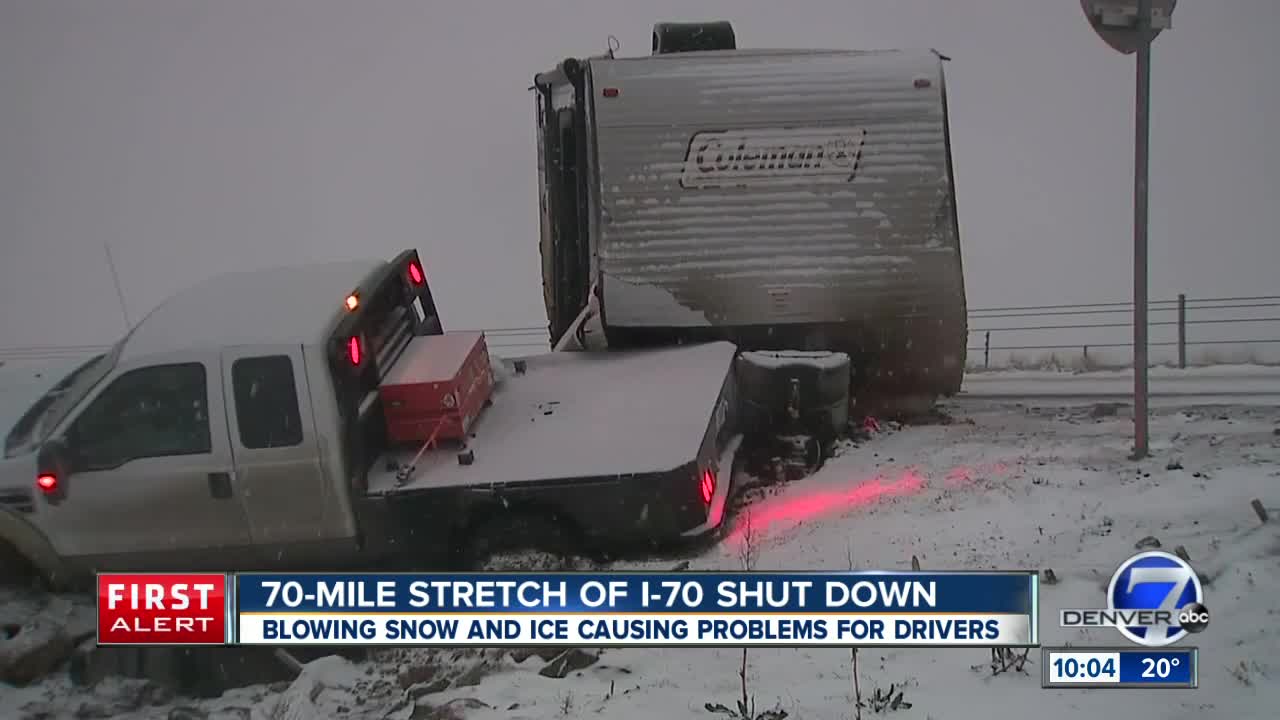 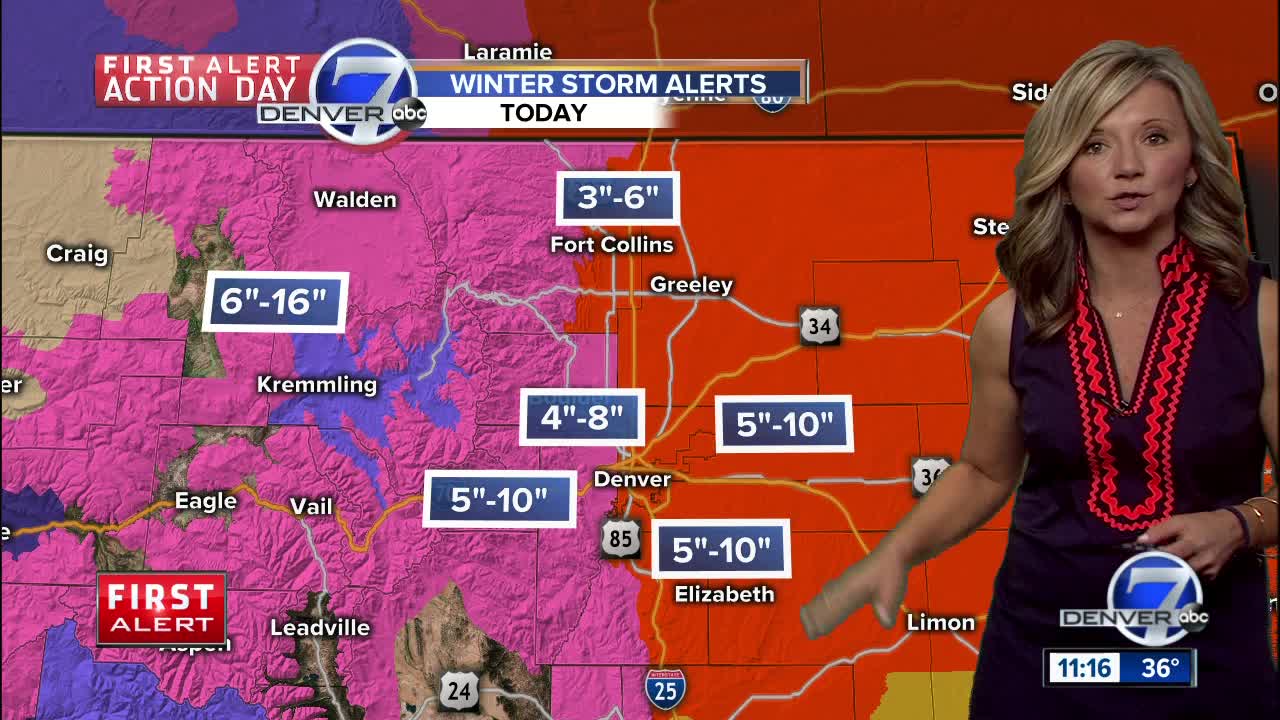 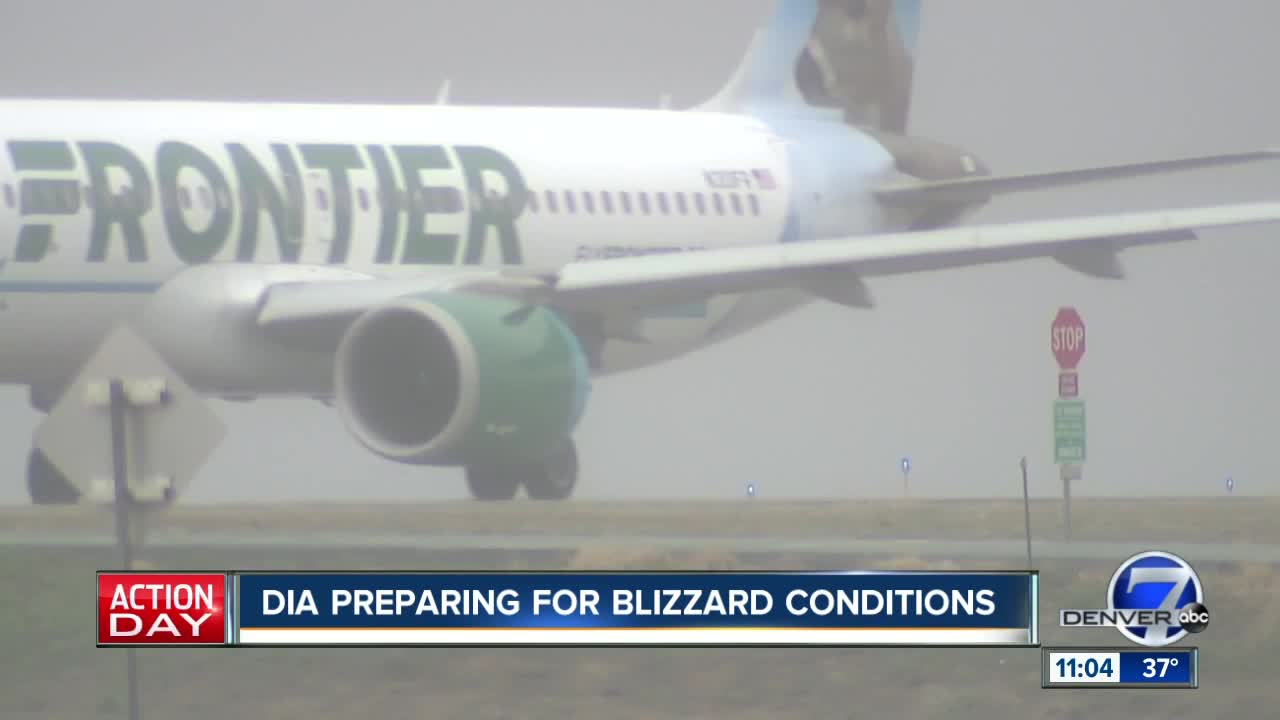 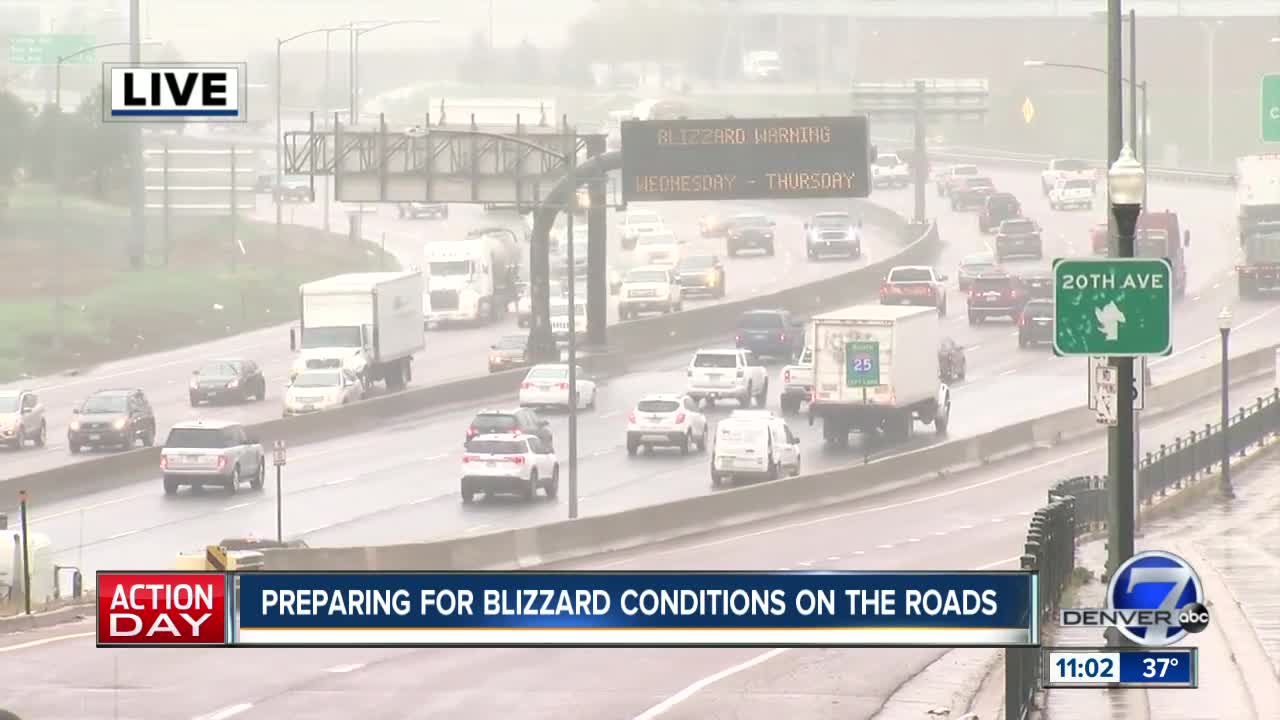 A Blizzard Warning has been issued for all of northeastern Colorado and the entire Denver metro area from 3 p.m. Wednesday until at least 9 a.m. Thursday. We'll continue to update this story with storm-related information throughout the day.

8 a.m., Thursday, April 11: We have Wednesday updates as the storm moves out of Colorado here.

10:10 p.m.: Denver police are investigating a two-vehicle fatal crash in the area of Queensburg and Trussville Streets, near DIA. Police said one driver was pronounced dead at the scene. The cause of the deadly crash is unknown at this time.

10:02 p.m.: Several roads are closed or being closed due to visibility issues and extremely icy conditions, CSP Limon says.

Several roads are closed or being closed due to visibility issues and extremely icy conditions. DO NOT ATTEMPT to drive past the closures PLEASE.

10 p.m.: Both directions of I-70 are closed between Bethune and US 385, near the border with Kansas, due to adverse weather conditions, CDOT officials say.

9:23 p.m.: CO 86 is closed both directions between Elizabeth St. and I-70 due to adverse weather conditions, CDOT says.

8:56 p.m.: Denver Public Schools will be on a delayed start for selected schools (those starting at 8:30 a.m. or later) on Thursday due to weather. Those schools will start classes an hour later, DPS officials say.

7:42 p.m.: Highway 138 is closed from Sterling to Nebraska, the Logan Officer of Emergency Management says.

7:39 p.m.: I-70 is backup westbound at Georgetown Hill due to numerous stuck vehicles - both passenger and commercial, CSP Golden officials say.

6:57 p.m.: I-70 EB has been closed at Vail due to numerous spun out commercial vehicles. "Will be quite some time to get enough tows in," says CSP Eagle - Division officials.

6:24 p.m.: There are multiple crashes being reported by CSP Golden:

MULTIPLE CRASHES SUDDENLY COMING IN:
US 285 & Kennedy Gulch
C-470 between Golden and Morrison
Colo 72 near Pine Cliff
I-70 near Silver Plume

6:12 p.m.: Southbound I-25 is blocked at Ridgegate (just south of Centennial) due to multiple crashes, according to the CSP - Castle Rock division.

5:21 p.m.: If you have no reason to be out on the roads this evening, please stay home. The trooper and the other driver were taken to the hospital with non-life threatening injuries.

MOVE OVER & SLOW DOWN. 3:34 PM H160 mm 61, a CSP vehicle with a trooper inside for another incident was hit. Both trooper and the other driver transported to Mercy w/ non-life threatening injuries. Investigation underway. pic.twitter.com/30FsyrjxqB

5:17 p.m.: US 34 is closed in both directions between CO 71 and County Road EE, and betweeen Brush and Akron, CDOT officials say.

4:57 p.m.: A total of 752 flights have been canceled and 115 are delayed at DIA due to wintry weather but airport officials say operations remain normal at this time. Both United and Southwest have canceled their remaining flights for today and Frontier is operating on a limited schedule. You're encouraged to check your flight status before you head out.

4:39 p.m.: University of Denver officials say that while classes will not be canceled tonight, students and staff should use their own judgment when determining whether or not come to make the drive to campus.

4:03 p.m.: Highway 34 is closed from Kersey, located east of Greeley, to I-76 at Wiggins, the CSP Sterling division officials say.

3:48 p.m.: I-76 is closed both ways from Lochbuie (just northeast of Denver) to the Nebraska state line, Colorado Department of Transportation officials say.

Just how much colder is it today? 47 degrees colder, as of 3 p.m. Welcome to spring in Colorado! #COwx

2:15 p.m.: Gov. Jared Polis has activated the Colorado National Guard so it can assist with any potential rescue efforts that stem from the blizzard hitting Colorado. Around 50 National Guard soldiers are being deployed along the Front Range. Twenty-four vehicles will be deployed, including light and medium tactical vehicles, a heavy tactical mobility truck and smaller support vehicles.

"The Colorado National Guard can get anywhere where we're needed with out tracked and high-wheeled vehicles," Joint Task Force-Centennial Commander U.S. Army Col. Scott Sherman said in a statement. "The CONG is always ready, always there to assist our neighbors to save lives, prevent suffering, and mitigate great property damage."

1:53 p.m.: A water main break has closed southbound South Broadway between West Chenango Ave. and West Belleview Ave. in Englewood. The road is expected to remain closed through the evening rush hour.

12:31 p.m.: In the wake of a blizzard that knocked out power for about 400,000 customers in March, Xcel Energy is preparing for another blizzard that could bring power outages with it.

Xcel has mobilized extra crews through the state in case they’re needed for outage restoration Wednesday and Thursday.

The company said its customers should prepare for possible outages, as power lines could be damaged in the high winds. A blizzard warning was issued at noon on Wednesday through Thursday at noon.

12:15 a.m.: CDOT is recommending people "head home as early as possible" Wednesday because of the incoming blizzard and a "high potential for major closures" on major highways, like interstates 25, 70 and 76.

"With the potential for these [blizzard] conditions, CDOT will proactively close highways for the safety of the traveling public."

CDOT says drivers should avoid driving if possible. But if you must drive, leave early, take it slow, and be sure you have a full tank of gas and emergency supplies in addition to winter tires. For more information on being prepared for winter driving, click here.

11:51 a.m.: We are seeing several school closures on the Eastern Plains, and some schools in the metro area have cancelled after-school activities. The Rockies and Rapids have also postponed today's games. Click here for more.

11:30 a.m.: Multiple crashes have shut down both directions of Interstate 70 in the mountains between Frisco and Copper Mountain. CSP Castle Rock says troopers estimate that it will take "hours" to clear the eastbound lanes of the highway. Click here for the COTrip website, which will show you statewide road conditions.

The Douglas County Sheriff's Office is warning people they "may need to make other plans" if they are traveling on I-25 between Castle Rock and Monument Wednesday afternoon. The office says there is a "high possibility" of road closures, which could include I-25, Highway 83 and other nearby highways -- most of which were shut down for hours during last month's blizzard.

9:27 a.m.: The Colorado Rapids have also decided to postpone their match today. The planned match against the Seattle Sounders will take place on Sept. 7 at 7 p.m.

9:20 a.m.: This afternoon's Colorado Rockies game has been postponed due to expected weather. The game will now be played on Aug. 26 at 1:10 p.m. Tickets for today's game will be valid for the Aug. 26 game, but if you can't attend, you can exchange it for another game. Call 303-ROCKIES for more information.