El Niño has ended: Here's what that means for Colorado and our upcoming winter season 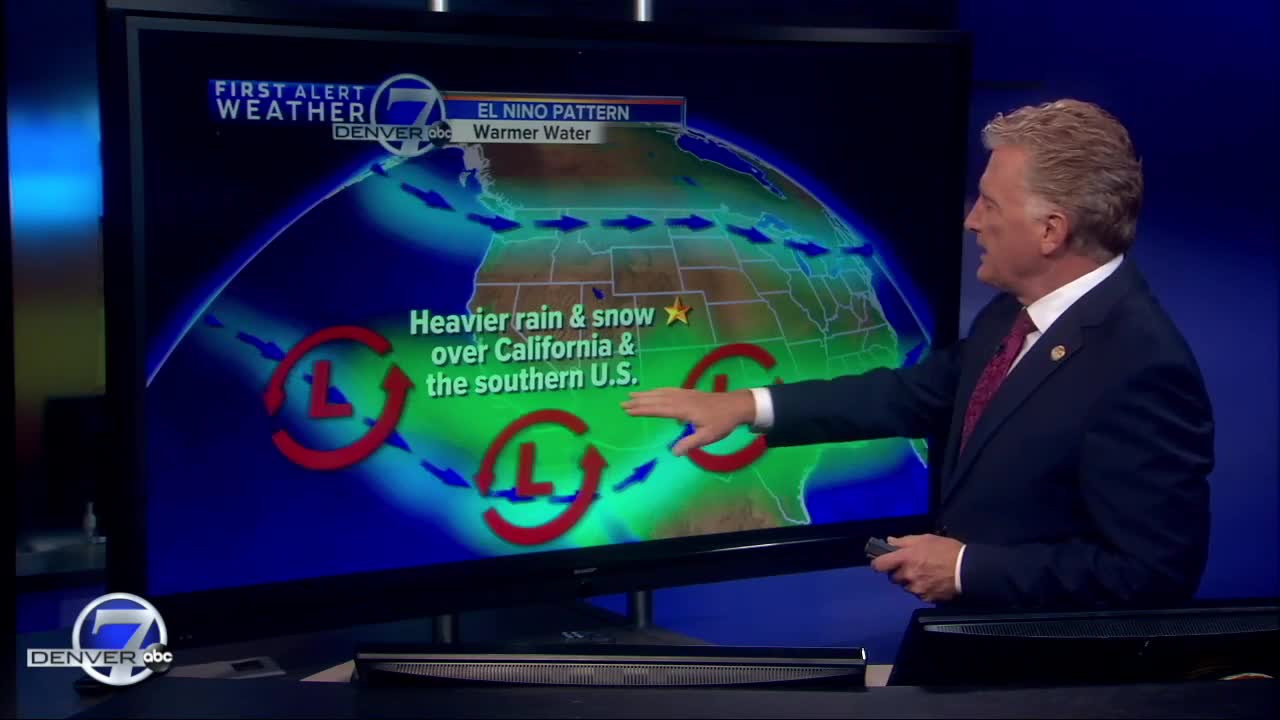 The surface temperatures in the equatorial Pacific Ocean have cooled enough for the National Weather Service to declare the El Niño event has ended.

The current status of the sea surface temperatures is considered to be in a neutral phase.

The Pacific Ocean is a very big place and there are often significant differences in sea surface temperatures from Indonesia all the way to the coast of South America. For this reason, the exact location of warmer or cooler water can play a major role in transferring heat from the ocean to the atmosphere.

When an El Niño episode is occurring, there's typically a large area of warm sea surface conditions. This helps to add warmth, moisture and energy into the atmosphere near the Equator. This energy will eventually impact the weather across the globe and here in Colorado.

The demise of the latest El Niño in the Pacific Ocean this summer will likely mean less energy for a strong and moist summer monsoon. However, El Niño conditions are more of a climate-forcing mechanism in the cold season. In the summer months, the winds aloft tend to be too light.

Stronger El Niño conditions tend to suppress tropical storm development due to increased windspeeds in the subtropical jetstream. This usually shears off the tops of developing hurricanes. Neutral conditions tend to favor more tropical activity, but there are many other factors involved.

The El Niño conditions tend to increase the jet stream energy from west to east, which also usually blocks really cold air into Canada, so our temperatures average a little warmer than normal over the course of an El Niño winter. In fact, we often see a prevailing jet stream flow from the southwest toward the northeast across the continental United States.

The amount of moisture in Colorado is usually higher during an El Niño winter as strong storms pour into the southwestern United States and swirl more snow into Colorado, favoring the central and southwest mountains.

Using Pacific sea surface conditions to forecast winter weather for Denver and the eastern plains is tricky. The great distance between our state and the ocean means that storms will change dramatically as they traverse the mountains and California, the vast dry region of Arizona, Nevada and Utah and our Colorado mountains. By the time a potent Pacific storm finally gets to Denver and the Front Range, there is often not much moisture left.

There have been a few memorable winter storms in the Denver area during an El Niño. The Christmas Eve blizzard of 1982 was in an El Niño year, as was the October 1997 storm and the blizzard of March 2003. But, we have also had many heavy snows during non-El Niño winters.

The opposite of El Niño is La Niña, which is a large area of cooler sea surface conditions. La Niña winters tend to be drier in much of Colorado, especially the central and southwestern mountains and often have more stronger winds. The jet stream favors a northwest-to-southeast pattern across the nation. This position of the jet stream favors the northern mountain areas, such as Steamboat and Winter Park.

In the Denver area, La Niña winters see more frequent lighter snow storms and a few good cold outbreaks. There tends to be more Chinook wind events as well, so temperatures can fluctuate quite a bit along the Front Range.

A neutral pattern (not El Niño or La Niña) means that we will not see either of these forcing mechanisms play a major role in our upcoming cold season. There are other factors that come into play though, including changes in warm and cold water positions in the Atlantic Ocean – less famous than El Niño or La Niña, but also important.

At present, while we are still weeks away from the leaves changing color and the average high temperature is still near 90 degrees, we have only a basic outlook for the winter ahead. Here's what it looks like so far:

Temperatures in Denver should stay a little warmer than average with a few good, bracing cold snaps. Frequent strong wind events are expected in January and February.