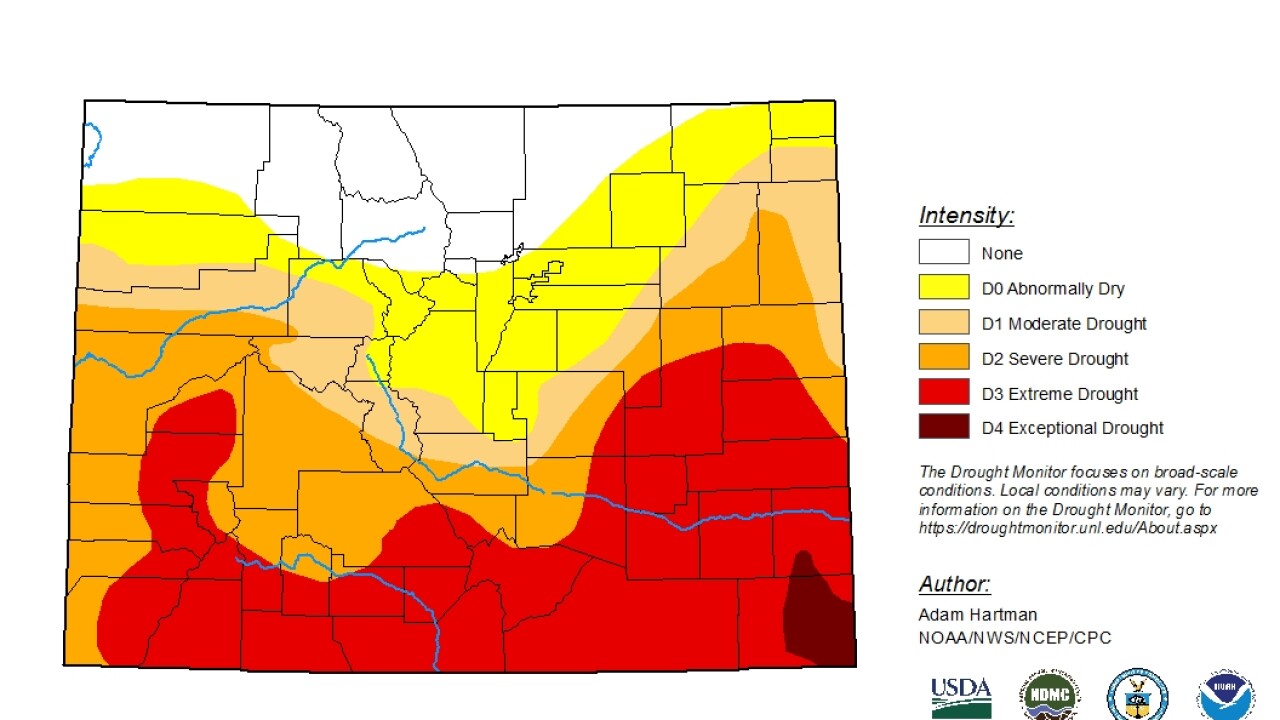 Copyright 2020 Scripps Media, Inc. All rights reserved. This material may not be published, broadcast, rewritten, or redistributed.
U.S. Drought Monitor
A sliver of Colorado is now experiencing exceptional drought – the most severe category given by the U.S. Drought Monitor – for the first time since February 2019, and 84% of the state is now seeing some facet of drought.

DENVER – A sliver of Colorado is now experiencing exceptional drought – the most severe category given by the U.S. Drought Monitor – for the first time since February 2019, and 84% of the state is now seeing some facet of drought.

Those figures come from the weekly U.S. Drought Monitor update, which this week shows that 84% of the state is now at least abnormally dry – the lowest drought categorization.

But exceptional drought has moved in to about half of Baca County and some of southwestern Prowers County – both in the far southeast corner of Colorado. That portion accounts for about 1.4% of the state.

Extreme drought now persists in 34% of the state – mostly in southern, southwestern and southeastern Colorado. But it has made its way into Kit Carson and Lincoln counties on the Eastern Plains as well.

Fifty-six percent of the state is under severe drought conditions, while 68% of Colorado is experiencing at least moderate drought. Just 16% of the state – in northern and northwestern Colorado – are completely drought-free as of Thursday.

The drought has gotten worse throughout 2020 so far in Colorado. In late June, Gov. Jared Polis activated the state’s Drought Task Force and drought plan for 40 counties experiencing severe or extreme drought conditions.

In early May, there were abnormally dry conditions in 76% in Colorado, compared to 84% on Thursday. Just 11% of the state at the time was experiencing extreme drought, compared to 34% today.

Last year, there were 14 straight weeks of drought-free conditions in Colorado, a streak that ended in August. Colorado last activated the Drought Mitigation and Response Plan in May 2018.

Fire bans are in effect for most of the state as the July 4th holiday weekend approaches, and officials statewide have been warning people against having open fires, shooting off fireworks or having fires at all during Stage 1 and Stage 2 fire restrictions, depending on which restrictions.

The Jefferson County Sheriff’s Office is closing Lariat Loop on Lookout Mountain Friday and Saturday afternoons and evenings to try to keep people from lighting off fireworks this weekend. The sheriff’s office said that it has also seen at least three fireworks caused by fireworks this week.

On Monday, a fallen power line sparked a wildfire in Douglas County that quickly spread to more than 460 acres and got within yards of homes in southern Highlands Ranch before firefighters on the ground and in the air were able to stamp it out.

While there are chances of rain this weekend in Colorado, next week’s forecast is showing increased temperatures and decreasing humidity across the plains and mountain valleys.