Driving in the Colorado snow: How to prepare your car for winter weather 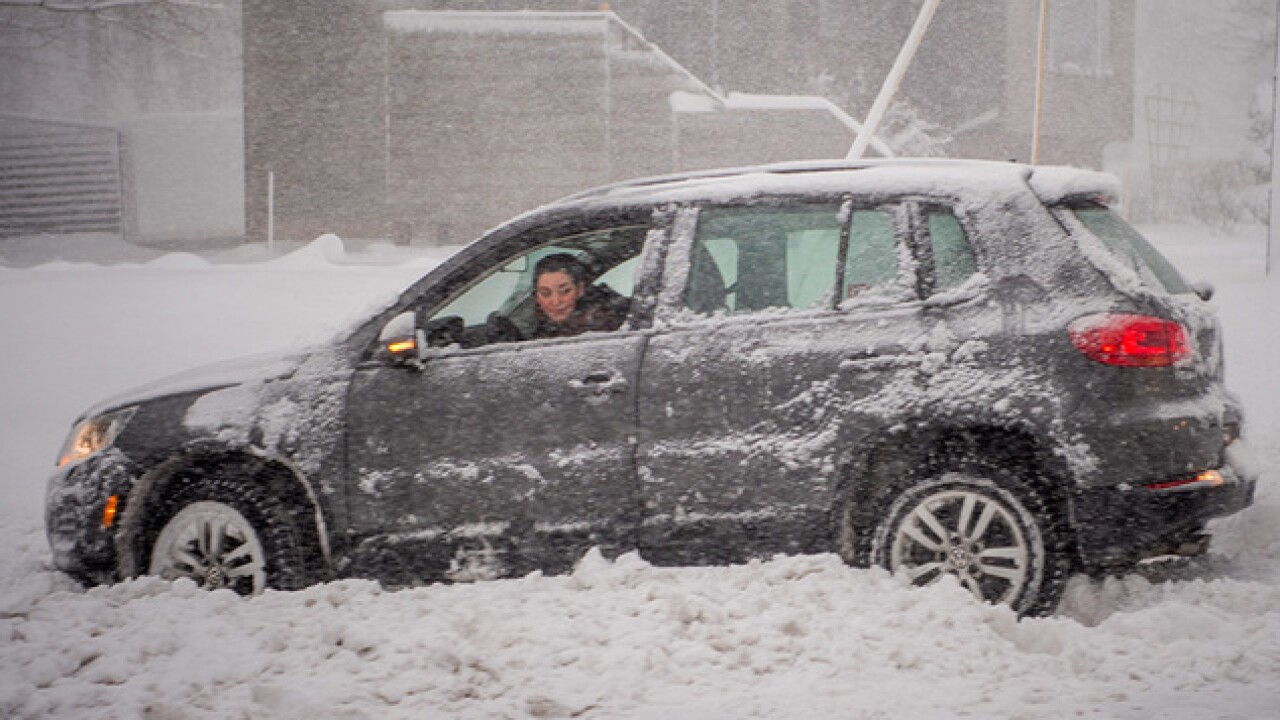 Copyright 2018 Scripps Media, Inc. All rights reserved. This material may not be published, broadcast, rewritten, or redistributed.
Andrew Theodorakis
<p>HAUPPAUGE, NY - FEBRUARY 09: Drivers cars are stuck on RT 347 during a blizzard that hit the metro area on February 9, 2017 in Hauppauge, New York. A major winter storm warning is forecast from Pennsylvania to Maine with the New York City area expected to receive up to one foot of snow. New York City schools are closed for the day. (Photo by Andrew Theodorakis/Getty Images)</p>

DENVER – Brush off those winter driving hats because snow is coming back to the Denver metro area and that can only mean one thing: It's time to winterize your car.

A significant winter storm is expected to produce heavy snow across the northern Colorado mountains as well as northeastern Colorado Monday night into Tuesday, with the heaviest snow expected north of I-70 where we could see up to a foot snow, according to models and forecasts released Sunday morning by the National Weather Service — which means travelers need to be prepared for treacherous driving conditions before winter comes, especially if you're new to the state (welcome to Colorado, transplants!).

So if you're new or if you've been here for a while now, it's worth remembering that the state has some special laws regarding winter driving.

Here are some tips for keeping your car and yourself safe while traveling in Colorado’s winter weather:

Tires are among the most important things you can invest in for winter driving, as worn tires can't grip the road well which can turn into a potentially dangerous experience. A good test to see if you need new tires requires just a single quarter.

Take the quarter, turn it upside down, and put it into your tire tread – Washington’s head goes upside-down. If your tire’s tread covers his head, your tires are OK. But if his head is poking out, you should probably look into getting a new set.

All-season tires are a good suggestion if you can only afford one new set, since they’ll get you through most of Colorado’s ever-changing weather conditions. But in the winter, snow tires are strongly suggested for most vehicles and are necessary for some.

The Colorado Department of Transportation will put in place traction or chain laws at times during periods of heavy snow.

This year, a new traction law went into effect: From Sept. 1 to May 31, all cars driving the 126-mile stretch on I-70 between Dotsero and Morrison must carry traction law equipment or be traction law compliant.

The “Traction Law,” also known as “Code 15” requires vehicles to either have four-wheel or all-wheel drive; as an alternative, to have snow tires or mud/snow tires; or if your vehicle doesn’t fit into either of those categories, have tire chains or another alternative traction device, like an AutoSock.

During snow and icy conditions, the minimum tread depth for tires on all vehicles - including those with four-wheel drive - have increased from an eighth of an inch to three-sixteenths of an inch.

These tires usually have an "M" or "M+S" designation on the tire.

But when conditions get really bad, CDOT will implement the Passenger Vehicle Chain Law, known as “Code 16,” which requires every vehicle on the road to have either chains or an alternative traction device.

CDOT has partnered with many Denver-area tire shops to offer discounts.

Any drivers with equipment that doesn’t meet standards at the time face fines between $130 and $650. For more information from CDOT on the traction and chain laws, click here.

CHECK YOUR BATTERIES AND FLUIDS

Car batteries should be checked, as the cold weather will suck some of their energy, causing the batteries not to perform as well. Batteries operate between 30 and 60% worse in weather under 32 degrees.

Some no-freeze washer fluid could also prove worthwhile, as certain washer fluids that are heavily water-based can freeze. In winter driving conditions, snow, ice and salt from the roads can cause windshields to become cloudy as they accumulate more gunk from the road.

Also be sure your brakes are working well and that the brake fluid is at the correct level. Mountain driving brings steep inclines and declines and sharp curves, and when the roads are slick, stopping times can be multiplied by up to six times the stopping times during normal conditions.

CLEAR OFF SNOW AND ICE FROM YOUR VEHICLE

Make sure to thoroughly scrape all windows and brush snow off your entire car, including the roof, before exiting your driveway.

It’s not just a courtesy for drivers who may be behind you during your commute – it’s the law in some states. You don’t want to be responsible for causing a crash due to chunks of snow falling from your car.

Please, do not be "that guy" (or gal) and help keep roads safe by taking the extra time to perform this simple task.

Roads can be tricky and you may be over-confident when taking the wheel in snowy conditions, which is why you should really be cautious when exiting your driveway (black ice, anyone?).

Some cars have traction control or a winter mode that helps. If you have an automatic transmission that allows second-gear starts, select that gear for better traction.

When on the road, reduce your speed to lessen the chance of a skid. Also, avoid any sudden inputs to the steering, throttle or brakes. Use lower gears when decelerating to allow the engine to slow the car. Imagine yourself driving with a hot cup of coffee in your lap – this should give you a general idea of how you should be driving during a snowstorm.

GIVE YOURSELF SOME SPACE

When driving in normal conditions, you should usually give yourself between three to five seconds of stopping distance between your car and the one in front of you. In slick roads, double that amount and adjust that number depending on how bad conditions get outside.

Don't pump the brakes: Let your car’s antilock brakes do the work for you, unless you’re driving a really old car that doesn't have antilock brakes. Check your owner’s manual to check if your car has these types of brakes.

If your driving under bridges and overpasses, lift your feet off the accelerator. Yes, snow plows will have more than likely passed through these areas, but it's best to be extra careful when driving under a bridge or an overpass – there may be ice, snow or both, causing you to spin out and lose control, potentially creating a crash.

Regarding snowplows: Colorado law states it is illegal for drivers to pass a snowplow operating in tandem formation with one or more snowplows. The snowplows have the right-of-way. In general, it’s best to stay safely behind plows.

Don't text, don't Snap, don't upload a picture of the road to Instagram, don't go live on Facebook. In short, don't get distracted. If you're going to heed any of the tips given in this article, this should be the most important one to take to heart.

Be sure to stock your car with an emergency kit filled with a flashlight, jumper cables, extra warm clothes, blankets, kitty litter (for traction purposes), flares and an ice scraper. In the event you become stopped in traffic during a highway closure or end up off the road waiting to be rescued, some of these essentials could save your life. Non-perishable food and water is also suggested.

If you have any questions about whether your car is ready for winter, head into a local mechanic for it to be checked out and tuned up if necessary.

How to survive your first Colorado winter, from a Colorado native