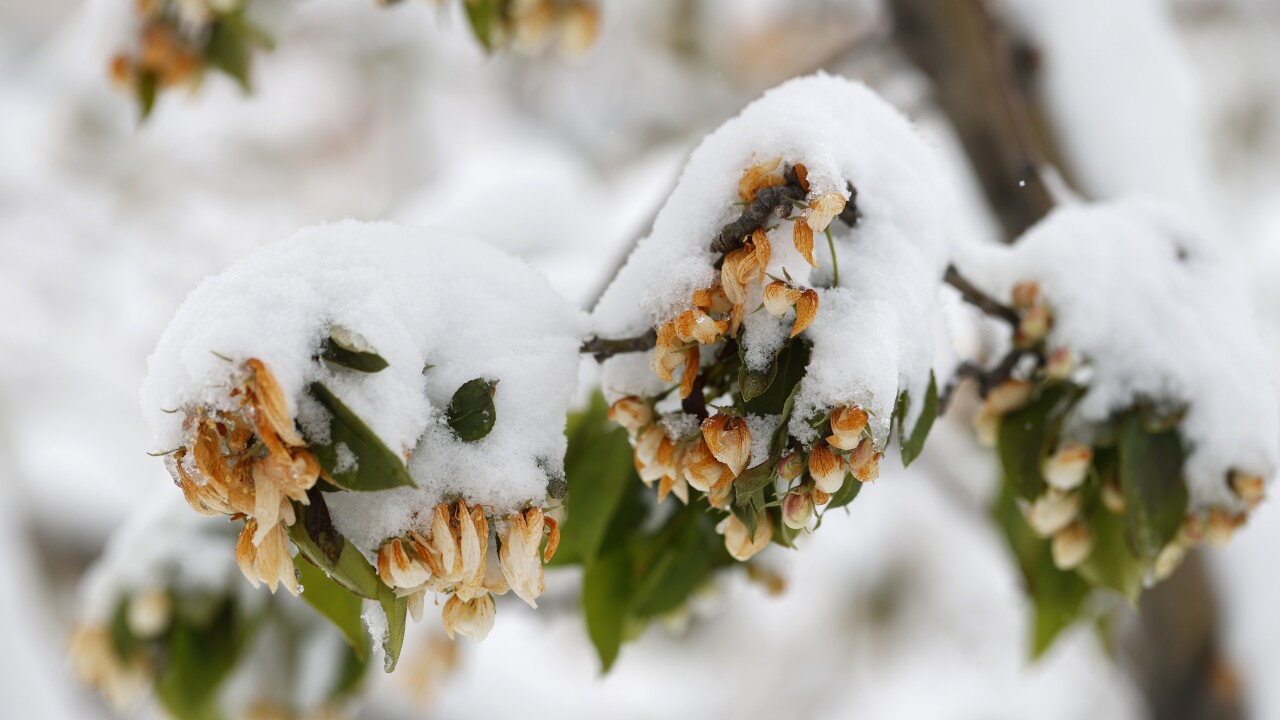 David Zalubowski/AP
Snow is draped over blossoms on a flowering crab apple tree after a spring storm swept over the intermountain West and dumped up to six inches of snow on the region Thursday, April 16, 2020, in Denver. Forecasters predict that the storm will drop up to 20 inches of snow on locations in the mountains west of Denver before moving out on to the Great Plains Friday. (AP Photo/David Zalubowski)

DENVER – After a record-breaking summer this year, much of the Front Range will experience the first taste of winter Monday night into Wednesday as a cold front moves into the state, bringing strong winds, much colder temperatures and snow from the north and northwest.

Denver7 will update you on the latest as Colorado’s first winter storm of the season makes its way through the state in our live blog below.

The Colorado Department of Transportation is asking drivers to slow down this morning, particularly south of the Denver metro area. Roads are mostly wet, but can be slick and slushy in spots.

Drivers are asked to particularly drive slowly over bridges and overpasses. Due to power outages, some traffic signals may be out. Treat those intersections like a four-way stop.

More than 100 CDOT plows are out in the Denver area and along the I-70 corridor from Golden to the Eisenhower-Johnson Memorial Tunnel. Many more plows are on duty statewide. Track their locations on their website: cotrip.org.

Hundreds of people are without power Wednesday morning. According to Xcel Energy's outage map, there are multiple reported outages in Lakewood, Denver, Arvada, Wheat Ridge, Englewood, Aurora, Boulder and Golden, among other locations. In total, about 4,160 customers are without power.

Crews are working to restore power. Click here to see the outage map and for details on when power could be restored.

After several hot and dry weeks, an early September snowstorm crashed through Colorado, bringing several inches of snow to parts of the Front Range and more than half a foot at higher elevations. See the most current snow totals here.

The Colorado State Patrol says the following vehicle traction laws and chain laws are in effect for Jefferson and Clear Creek counties due to wintry weather:

CMV's-DO NOT Wait Out The Storm in Chain Stations

After a few days of record-breaking heat, Denver recording a breaking low temperature of 31 degrees at DIA for Sept. 8, tying a previous record low set in 1962, according to the National Weather Service.

The Denver Rescue Mission will open its Holly Street shelter this evening to accommodate male guests overnight, Denver Mayor Michael Hancock said in a tweet. Buses will be available from the auxiliary shelter for men at the Denver Coliseum and guests need to access busing by 8 p.m.

The passenger vehicle traction law is in place on many mountain highways as of Tuesday afternoon, including on both directions of I-70 between Georgetown and Silverthorne and both directions of U.S. 24 and on U.S. 50, among others.

If a person who does not follow the law, which requires chains, all-wheel drive or four-wheel drive, or snow tires, and they cause a road closure, they will be fined $650.

The Denver Department of Transportation and Infrastructure says it will have a crew of plow drivers on duty overnight to keep watch and respond if needed as wintry weather moves into the area tonight into tomorrow.

The City of Boulder says a severe weather shelter will be open tonight and tomorrow night at Boulder Shelter for the Homeless. Officials added those not already involved in programs need to know that beds are limited, and you are asked to call 303-579-4404 for more information. More information available here: https://bouldercolorado.gov/homelessness/homelessness.

The westbound lanes of I-70 at Georgetown are under a safety closure, according to CDOT.

Monarch Pass is closed due to adverse weather conditions, according to the Colorado State Patrol - Florence division. There is no estimated time for the reopening of the highway.

Glenarm Recreation Center, which is located at 2800 Glenarm Place, has opened as an emergency shelter for women and transgender individuals experiencing homelessness.

The shelter is open Tuesday through lunchtime on Wednesday.

Denver Rescue Mission will open its Holly Street Shelter Tuesday evening for male guests. Buses will run from the the auxiliary shelter for men at the Denver Coliseum to the shelter Tuesday afternoon and early evening.

St. Francis Center is open with normal operations for men and women through 3 p.m.

The Gathering Place is open for women, children and transgender individuals Tuesday until 1:30 p.m.

Rabbit Ears Pass in the north-central mountains reopened shortly before noon Tuesday but poor visibility and driving conditions were still in place, according to the Colorado State Patrol.

Earlier Tuesday snow was already covering the roadway, forcing officials to shut the road down. The Steamboat Springs area was seeing extreme winter conditions with heavy snow and strong winds.

Shannon Lukens with Steamboat Radio is reporting "extreme" weather in Steamboat Springs as the strong winds whip snow and smoke around town. The gusts are strong enough to have already felled trees.

Rabbit Ears Pass is closed due to crashes and winter driving conditions. As a detour, use CO 131 and 134.

It is a tough drive on highway 40 in North Central Colorado near Rabbit ears Pass. It is closed for the moment due to crashes and winter driving conditions. Use CO 131 and 134 as a detour. pic.twitter.com/d0SCZh3haB

Highway 40 between Berthoud Pass and Empire is closed due to a crash. There is no estimated time for its reopening.

Falling precipitation is switching between rain and snow in Denver. Constant, heavy and wet snow is expected later this afternoon.

Snow is falling at the Denver Civic Center! ❄️

Here's everything you need to know about today's snow: https://t.co/UxsmyAuXhb #COwx pic.twitter.com/BKEWBWvVmq

Xcel Energy is showing some small power outages in the Denver metro area. The largest involves about 338 customers in Golden, east of the Fossil Trace Golf Club. Click here for the outage map.

The rain has changed to snow in the foothills. It is still rain in northern Colorado but it should start snowing later this morning. pic.twitter.com/1aqPuUZiD6

Denver Public Schools says some programs as well as food distribution operations on Tuesday and possibly Wednesday will be affected due to wintry weather as the district deals with what they called "mechanical issues related to heating."