80% of Colorado experiencing some type of drought, compared to 35% this time last year 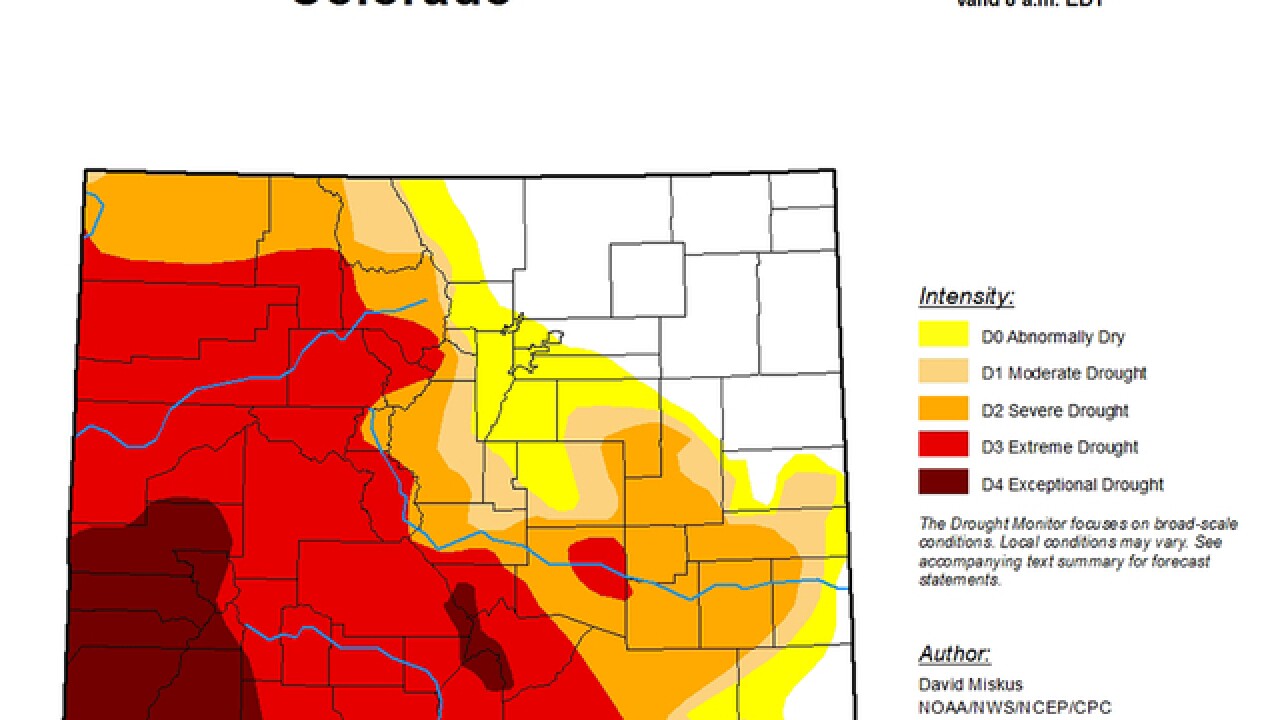 DENVER – Just 20 percent of Colorado is not currently experiencing some type of drought, which is unchanged from last week but far different than where it sat a year ago, when nearly 65 percent of the state was drought-free.

The Drought Monitor estimates that about 1.4 million Coloradans are currently experiencing drought.

The worst conditions are seen primarily across the seven counties tucked into Colorado’s southwest corner, and the northeastern corner of the state is mostly drought-free.

The statistics show the drastic change in drought conditions that has happened in Colorado over the past year.

A year ago, 65 percent of the state was not experiencing drought of any sort. Thirty-five percent of Colorado was “abnormally dry,” and just 4 percent was under moderate drought.

And the Colorado wildfires continue to burn. The Silver Creek Fire near Steamboat Springs, which has been burning since mid-July, flared up again this week and continues to burn. The fire has scorched an additional 170 acres since Tuesday. The Seaman Fire burning in the lower Poudre Canyon in Larimer County is estimated at 231 acres Thursday.

There are red flag warnings in effect again Thursday for most of the western half of the state from 10 a.m. though 9 p.m., with high temperatures, gusty winds and low relative humidity forecast through the day. In Denver Thursday, temperatures hit 93 degrees just before 2 p.m. and the relative humidity was just 6 percent, the National Weather Service said.

Denver already broke a heat record this week and was close to doing so again Wednesday. The drought has led to several reservoirs and rivers being  far below their normal capacity . Blue Mesa Reservoir, which feeds into the Colorado river, is at 39 percent of its capacity—levels not seen in 31 years.

The heat is expected to persist across the state through the weekend before cooler temperatures arrive early next week.

Click here for more on the latest weather conditions and forecast.