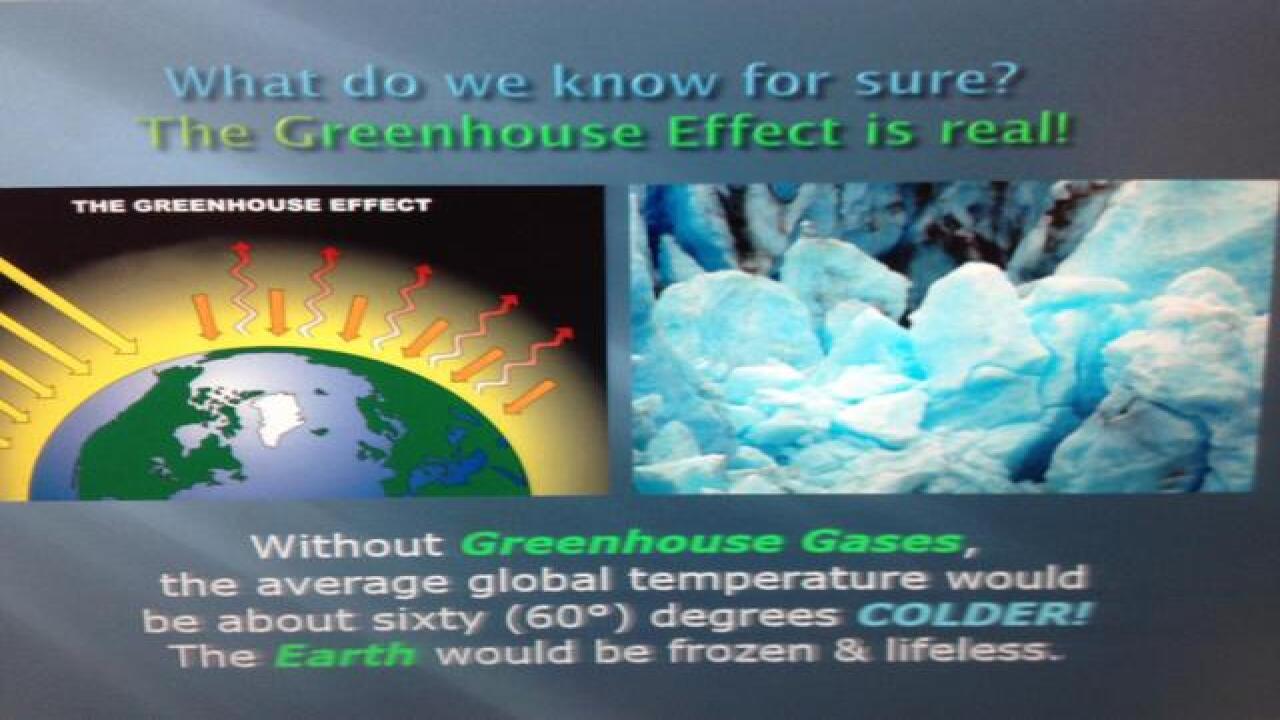 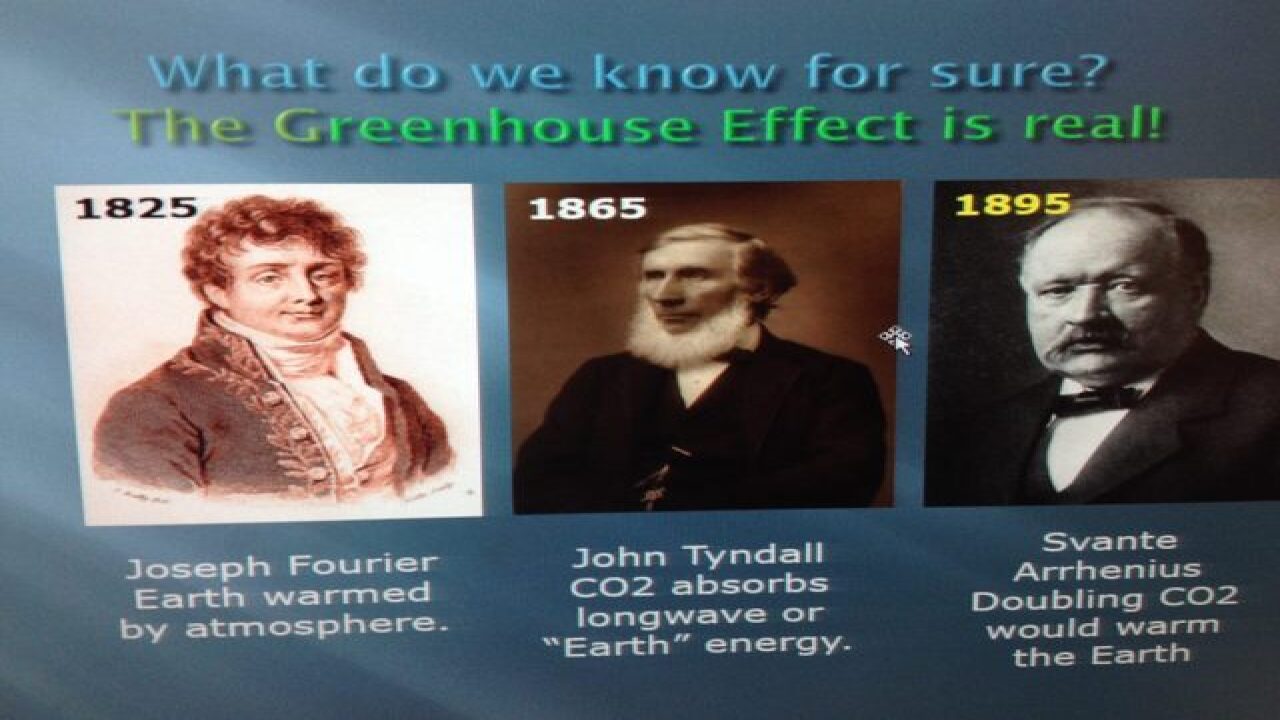 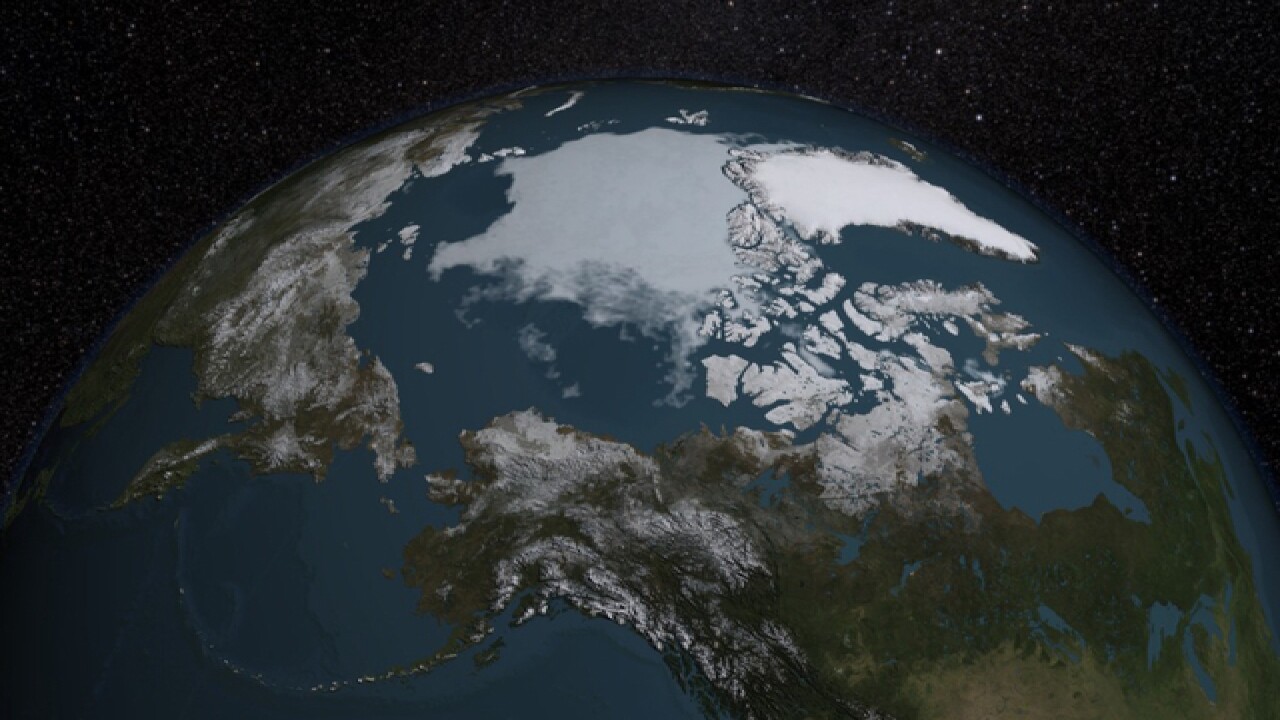 Happy Earth Day! As many of you know, I strongly believe that the Earth's climate is warming and that warming is largely due to the increase in greenhouse gases.

While this topic has stirred up controversy and some strong reactions, it truly is pretty simple science: When you add HEAT to something, it gets WARMER!

It is absolutely true that the Earth's climate has cycled through great changes over the course of our geologic history. These changes are obvious in the fossil record -- Denver was once under a great shallow ocean!

These changes are due to a variety of causes, from volcanoes to continental drift, to the shift in the Earth's orbit on its journey around the Sun, to changes in the output of energy from the Sun.

One of the key components to our Ice Ages has been what are called the Milankovitch Cycles. These long-term changes in the shape of our orbit and the shift in the tilt of the Earth work like the complex gears of a clock, gradually switching our planet from Ice Age to warmer periods and back again.

The Milankovitch Cycles are well documented and have been a primary driver of our changing climate for hundreds of thousands to millions of years. Here is a l ink to learn more

The Greenhouse Effect is a good thing! In fact, if not for this effect, the Earth would be about 60 degrees Fahrenheit colder -- a lifeless ice planet.

This is not new science!

In fact in 1825, a French mathematician named Joseph Fourier calculated that given the distance from the Sun, the Earth should be much colder. He theorized that it was the atmosphere that trapped enough heat from the Sun to make our planet habitable.

In 1865, John Tyndall, an Irish physicist, did early experiments with carbon dioxide and discovered that CO2 was very effective at trapping long-wave or Earth energy.

In 1895, a Swedish researcher named Svante Arrhenius theorized that a doubling of carbon dioxide in the atmosphere would cause the Earth's average temperature to increase by several degrees.

In the past 200 years (since the Industrial Revolution) the increased burning of fossil fuels has released vast amounts of carbon dioxide into the atmosphere. The concentration of CO2 has risen about 25 percent in the past two centuries from 280 parts per million to just over 400 parts per million.

Think of each molecule of carbon dioxide like a feather in a down comforter. If there are not very many feathers, your body's heat will escape through the comforter and you will be cold. If you keep adding feather after feather, the comforter becomes much more efficient at holding in your body heat and you stay warmer.

Our atmosphere can be thought of as a giant comforter and modern scientists have calculated that a doubling of the CO2 from pre-industrial levels will results in a net increase of 4 watts per square meter of stored energy over the entire surface of the Earth.

That is about a night-light’s worth of heat over a square meter, but taken over the vast surface area of the Earth, this is a tremendous amount of energy!

Methane is an even more powerful "greenhouse gas" and is being released as permafrost melts in the high latitudes and from leaking at natural gas well sites -- fortunately this leaking is something we can fix and contain, if we choose.

It is very important to realize that a heat-wave, tornado outbreak, record flood or major blizzard is not climate -- it is weather! The weather goes through tremendous fluctuations from day to day and even hour to hour -- let alone over the course of weeks, months or even years.

Experts at the National Center for Atmospheric Research (NCAR) feel that 90 to 95 percent of what we see in the wide variety of weather is due to natural variability. The remaining 5 to 10 percent is due to the warming of the planet due to an increase in various greenhouse gases.

Warmer average temperatures in the western United States will likely manifest in more drought and fire concerns in the decades to come. Because we are far away from large bodies of water, higher temperatures here are not usually associated with increased humidity -- in fact, just the opposite.

-- El Niño and other ocean circulations --

El Niño and La Niña episodes may be altered in the coming century. The periodic warming and cooling of the Pacific Ocean along the Equator has enormous implications on global weather. These warming and cooling events in the ocean need to be taken into consideration over the long term, not used as singular examples of a change in the climate.

However, as the overall temperature of the Earth increases, it is quite possible that we will see stronger versions of both El Niño and La Niña. The result will be increasingly severe individual episodes of heat and drought, storms and floods.

There are several other periodic ocean circulations that are not as "famous" as El Niño or La Niña. These circulations help to store vast amounts of the heat in the ocean water. The periodic release of the stored heat from the ocean to the atmosphere is a key reason that we see the warming occur in steps instead of a gradual ramping from year to year.

I studied meteorology at the University of Wisconsin at Madison in the 1970s. At that time, Dr. Reid Bryson, one of the founders of the UW Meteorology Department was lecturing about the prospect of a "New Ice Age". The cause, Bryson theorized, was due to the increase in tiny particles of smoke and dust during the Industrial Revolution.

In fact, even at the time, most researchers, including Bryson, felt that the increase in CO2 would eventually offset this "dirty window" effect and the climate would begin to warm.

This is an important point, as many anthropogenic global warming (AGW) skeptics still bring up the "1970s Global Cooling Theory" as an argument that the current consensus among climate scientists has been an "about face" form the 1970s.

Satellite measurements since the late 1970s have shown that the sea ice has dramatically diminished. Sea ice does grow and shrink due to natural cycles, but it appears that the current state of the ice is near historic lows.

The sea ice is highly reflective, but dark open ocean is just the opposite. As more of the Arctic remains open, the waters will warm and this may play a significant role in altering the phases and intensity of many ocean circulations.

I am not a climate scientist; my expertise lies in a much, much shorter time-frame. However, I spend a great deal of time on-line and at seminars with many of the best climate scientists from NCAR and other research institutes from around the world.

My opinion is that we are having a significant impact on the warming of our climate, and this will make weather events more extreme. With a greater amount of energy in the climate system, there will be drier droughts, heavier rains (although more spotty), bigger winter storms and more powerful severe weather events.

Remember, 90 to 95 percent percent of what we see is within the normal variability of weather -- it is that extra 5 to 10 percent, the "steroid" effect that is making a drought drier, a heat wave that much hotter, a winter slightly less cold, the nowpack will melt earlier.

When the Soviet Cosmonaut Yuri Gagarin, the first human in outer space, reached the top of our atmosphere and gazed out of his small porthole, he was terrified. He was not worried about his spacecraft, he was shocked by how thin and fragile our atmosphere appeared against the cold blackness of space.

Gagarin later explained that he had always been taught that we lived at the bottom of a "great ocean" of air. From his tiny spacecraft, the ocean looked more like a shallow puddle.

As far as we know, out of the vastness of the universe, Earth is the only place that harbors life. Someday we may find other worlds that provide an environment gentle enough to enable life to form, but for now, this is it, our lonely outpost in the corner of a galaxy.

It seems prudent, patriotic and reverent that we do what we can to conserve and protect the fragile envelope of air that allows us to live on planet Earth. The legacy we leave future generations depends upon the actions we take in the coming years. Our heirs will be the judges of our success.

In the words of Thomas Jefferson in 1789, "I say the Earth belongs to each generation during its course, fully and in its own right, and no generation can contract debts greater than may be paid during the course of its own existence."