C-470 Express Lanes project won't be completed for a while The C-470 Express lanes project could take another six months and a year to finish. 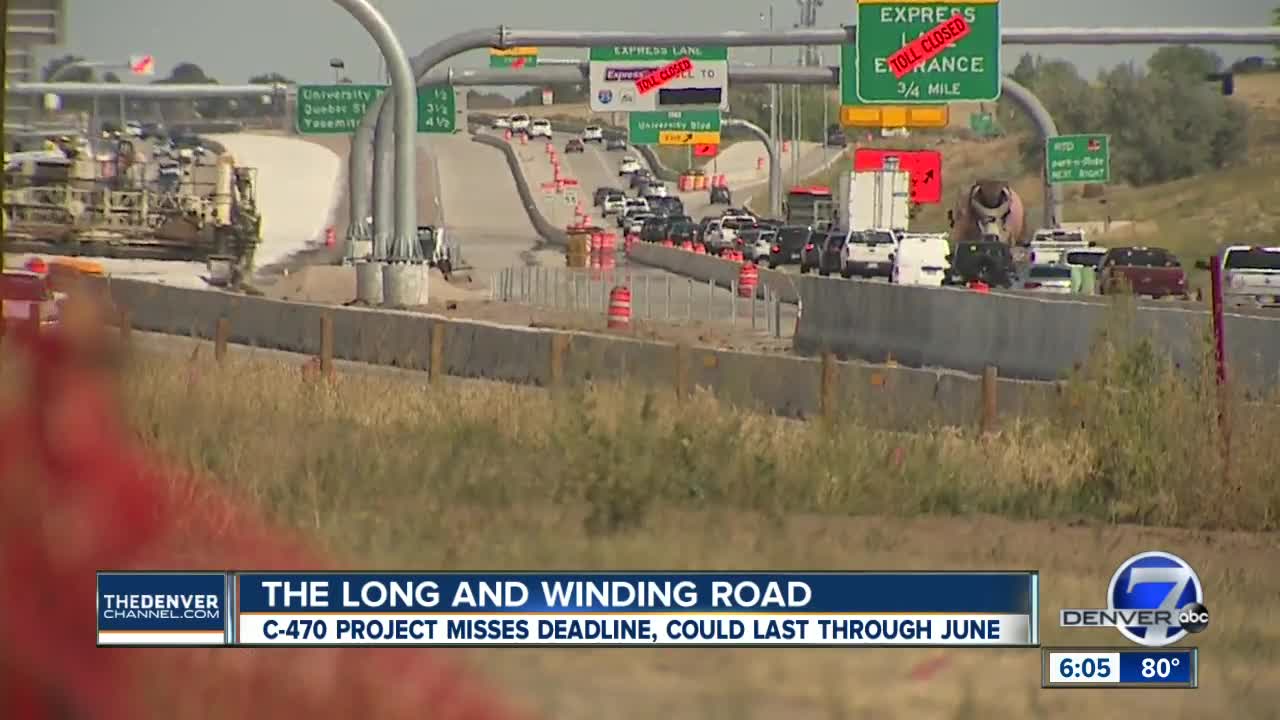 HIGHLANDS RANCH, Colo. -- The C-470 Express Lanes project could take up to a year to finish. The construction project, which will add an express lane in each direction of a 12.5-mile stretch between I-25 and Wadsworth was supposed to be completed by August 1.

However, at the start of August, the project was only 83% completed. On August 2, the Colorado Department of Transportation (CDOT) sent a default notice to the contractor, Flatiron/AECOM, LLC, blaming it for the delay to the project.

Back in June, the letter reads, the contractor asked for a 103-day extension request due to weather delays in construction. However, the letter states it was an abrupt change from the contractor’s previous indications as recently as May that the project would be completed on time.

The new estimated completion date is between this December and next June. Eventually, the $276 million project will make for faster commute times. For now, though, it has caused some headaches for drivers.

Michael Wood says he takes the highway a few times a week and says the road is dangerous.

“At night it gets dark and they don’t have it lit very well and it’s not very safe,” Wood said. “It’s a bad thing. I don’t know why it’s getting delayed more.”

He wasn’t surprised by the delay in the project but says he is disappointed in it.

“When it’s government stuff it just doesn’t seem to get done on time,” he said.

Darrel Stockett, meanwhile, blames his broken windshield on debris and rocks in the construction zone.

“They’ve got gravel and dirt and stuff everywhere. You’ve got cars shooting it out of their back tires, maybe I’m just the unlucky one,” he said.

Stockett pointed out at least four spots where his windshield had been damaged by rocks.

“I’m just waiting until it’s done and then I’m going to put a new windshield in,” Stockett said. “I don’t know, I might be a rock magnet.”

He is looking forward to using the express lanes when they are completed. He also wasn’t too surprised by the delay but says he’s trying to stay optimistic.

A spokesperson for CDOT said talks between the two groups are ongoing and there’s no indication at this point when they could end. There’s also no indication how much the delay will add to the project in terms of cost.

In a statement sent to Denver7, CDOT said, “As has been reported and the travelling public can continue to see, the C-470 Tolled Express Lanes project was not completed by its August 1, 2019 deadline. CDOT and the project contractor, Flatiron | AECOM (F|A), will proceed through proper channels to resolve the issues that brought the project to this point. All parties involved share the goal of delivering a high-quality, safe road for Coloradans as soon as possible.”