Driving You Crazy: Why do they pave parts of I-25 with asphalt and other areas with concrete? 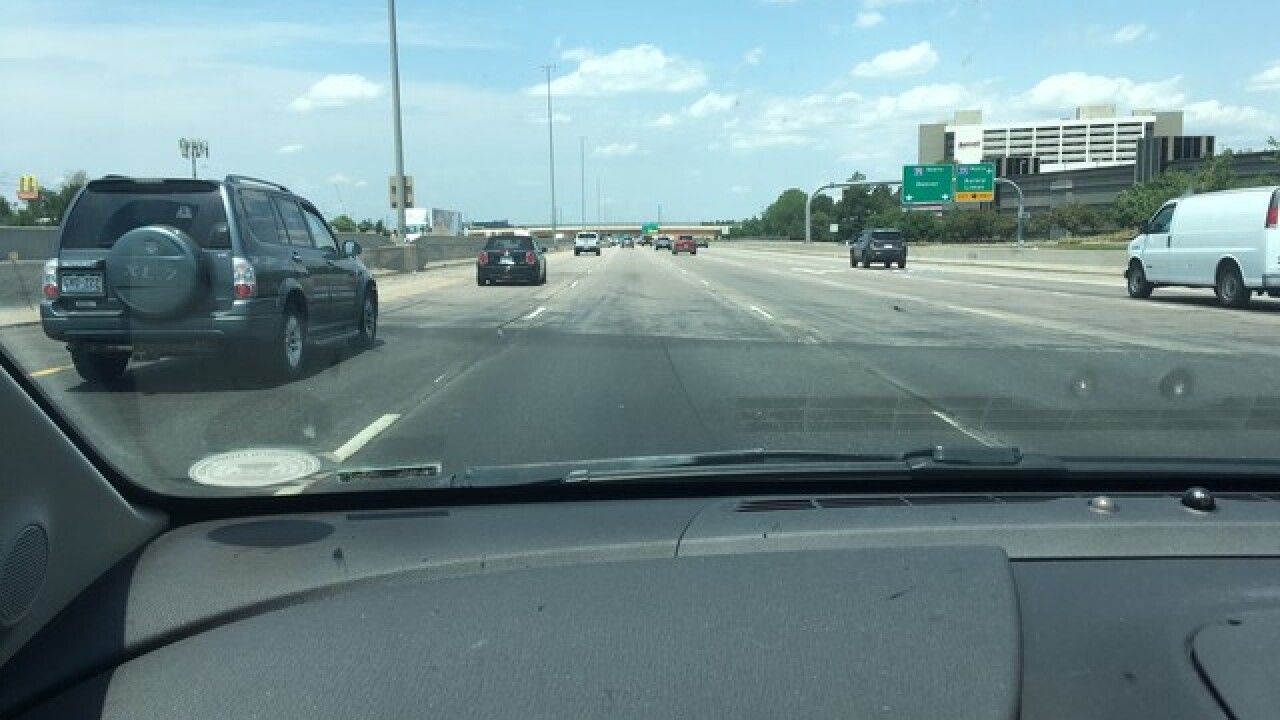 Mike from southeast Aurora writes, “What is driving you crazy? Hey Jayson, why do they pave parts of I 25 with asphalt and other areas with concrete?”

Oh, the debate between asphalt and concrete is almost as old as the Ford Model T. There are benefits and problems with both surfaces. We will go over that in a bit. I can see from the picture you sent, you were driving on northbound I-25 at Belleview. That is part of the section of I-25 that is going through an $11 million repaving project this summer. The concrete that you transitioned to doesn’t need to be repaved. That is one of the benefits of concrete you hear from proponents.

The reason you transition between asphalt and concrete on I-25 between C-470 and Alameda is thanks to the 2001 T-REX project. T-REX stands for the Transportation Expansion Project, a $1.67 billion combined freeway reconstruction and light-rail extension in southeast Denver.

I recall during the initial design phase of the project that some engineers made the recommendation to create the entire road surface in concrete. Others suggested that using all concrete would raise the cost of the project much higher while others said concrete would cost more initially but would last much longer. At the time, planners were trying to keep the overall road portion of the project under $800 million. The discussions continued during the project since it was constructed using the “Design Build” method. That is where the contractor, in this case Kewit Construction, created a general layout and conceptual plan before starting work and continued working on and changing that plan during construction. Many of the final details, even some of the larger issues, were decided well after construction started.

The debate between concrete and asphalt is a contentious one between companies that make it. Concrete is generally more durable than asphalt and is usually preferred on roads with higher traffic volume. Mark Wachal, president of Recycled Materials Co. in Arvada told the Denver Business Journal before the T-REX project started, "Asphalt is a flexible pavement and has the capability of moving slightly. In case of our weather changes and temperature changes, asphalt has the ability to be a little more flexible and not crack. It also has the downside at times of rutting with heavy traffic in a given path.” The "rutting" has turned out to be a major problem on I-25 in the Denver Tech Center, especially during heavy rains.

The journal also pointed out that in the Colorado/Wyoming Chapter of the American Concrete Pavement Association proposal to the Department of Transportation, that concrete pavement costs less, lasts longer and is safer than asphalt. The group added that, "Concrete pavement requires little or no maintenance. CDOT estimates that 22 years will pass before a major rehabilitation is required on concrete, while major asphalt overlays are required every 8 years on asphalt pavement. Annual maintenance costs per lane mile for concrete are one-twelfth those of asphalt."

The case for concrete by the pavement association in the journal article continued saying, "textured concrete pavement has better skid resistance than asphalt, is brighter at night and does not have black ice". The Federal Highway Administration states that concrete increases fuel efficiency for trucks by up to 20 percent.

According to Ayres Associates, a nationwide engineering, mapping, environmental, architectural, and survey firm, there are some key differences between asphalt and concrete.

High traffic counts – particularly heavy truck volumes – make concrete a desirable choice because it simply holds up better under heavy loads. Hence the tendency for state departments of transportation to go with concrete on interstates.

Roadway segments with high turning movements and stopping points also present some disadvantages for asphalt since it is prone to tearing under these stresses. But even this is not a black-and-white matter. Harder oils can be used in asphalt mixes to reduce rutting, but this can also make the asphalt more brittle. Likewise, the wrong oil in an asphalt mixture can lead to cracking in extreme cold and rutting in extreme heat.

Asphalt provides a nicer, smoother, often quieter ride when relatively new. Concrete can be noisier because it is tined or broomed during construction to make it rough enough to provide good tire grip. And slight shifting and settling of the many slabs of concrete over time can produce that rhythmic ka-tunk, ka-tunk, ka-tunk sound motorists know well.

Harsh winter conditions present some disadvantages for concrete. The darker asphalt pavement warms up as sunlight hits a plowed roadway, and Mother Nature helps melt away any snow left behind by plows. Salt used for snow removal also can eat away at concrete, so some municipalities opt for a no-salt policy for the first winter or two after a concrete road is built.

Another geographic factor comes into play when the locally available aggregate that goes into a concrete mix has a high chert content. These chert pieces in the finished concrete collect moisture, and then during freeze-thaw cycles in the spring and fall the chert expands and pops out of the pavement, causing pock-marking.

For counties and small towns, asphalt is attractive because these agencies have the relatively simple equipment that can accomplish patching when maintenance is necessary. Cities may opt for concrete because it provides for less frequent repairs and better strength under the crush of heavier traffic volumes.

In urban settings, concrete also offers clear advantages if stamping and coloring is desired as a way to increase safety at crosswalks or to generally enhance aesthetics.

Asphalt is ready to drive on as soon as it is compacted by a roller. Concrete typically must cure for seven days after pouring. High-early-strength concrete varieties offer a one- to three-day curing period where shortening construction inconveniences is critical.

Ultimately cost is a primary consideration, and DOTs look at the life cycle cost over 50 years when comparing the two pavement types and their relative costs initially and in terms of maintenance.

In 2002 the Colorado DOT placed both concrete and asphalt on Powers Boulevard in Colorado Springs to determine the pros and cons of each pavement while each is exposed to the same weather, soil, and traffic conditions. The northbound lanes were paved with concrete and the southbound with asphalt. The 15-year study should produce some conclusions next year.