Driving You Crazy: The updated Arapahoe & I-25 interchange is just as bad as ever before 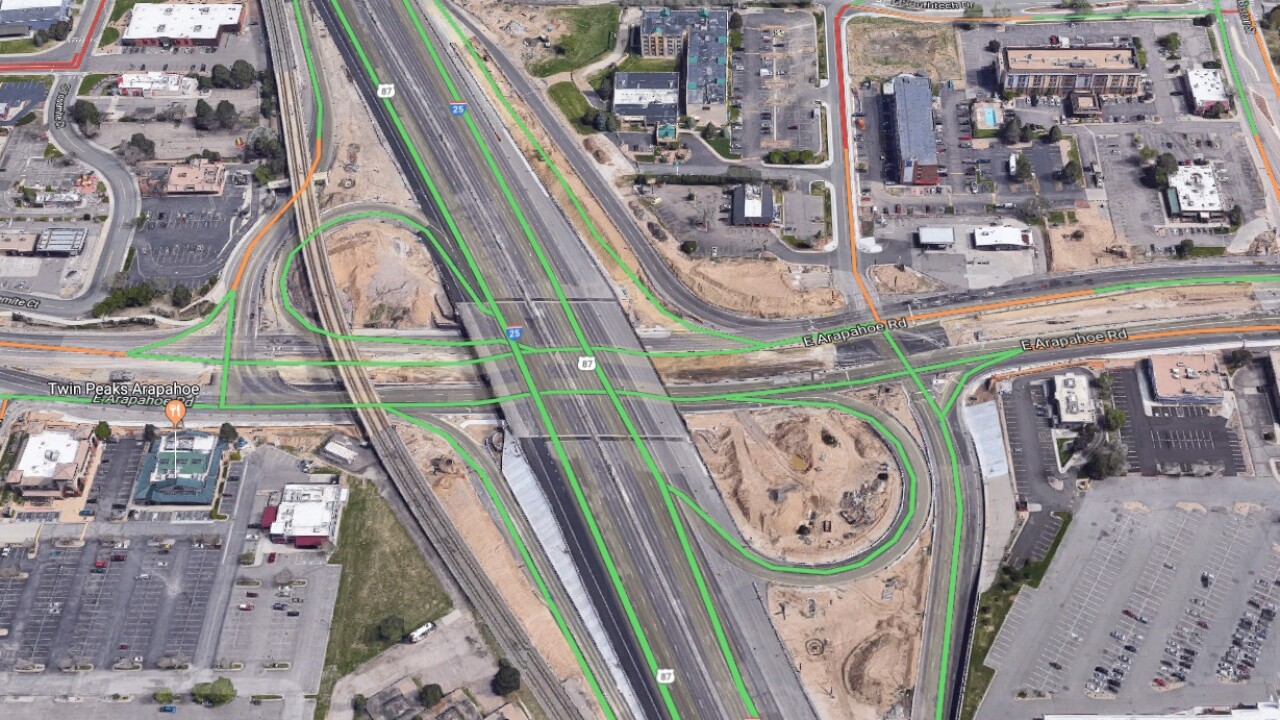 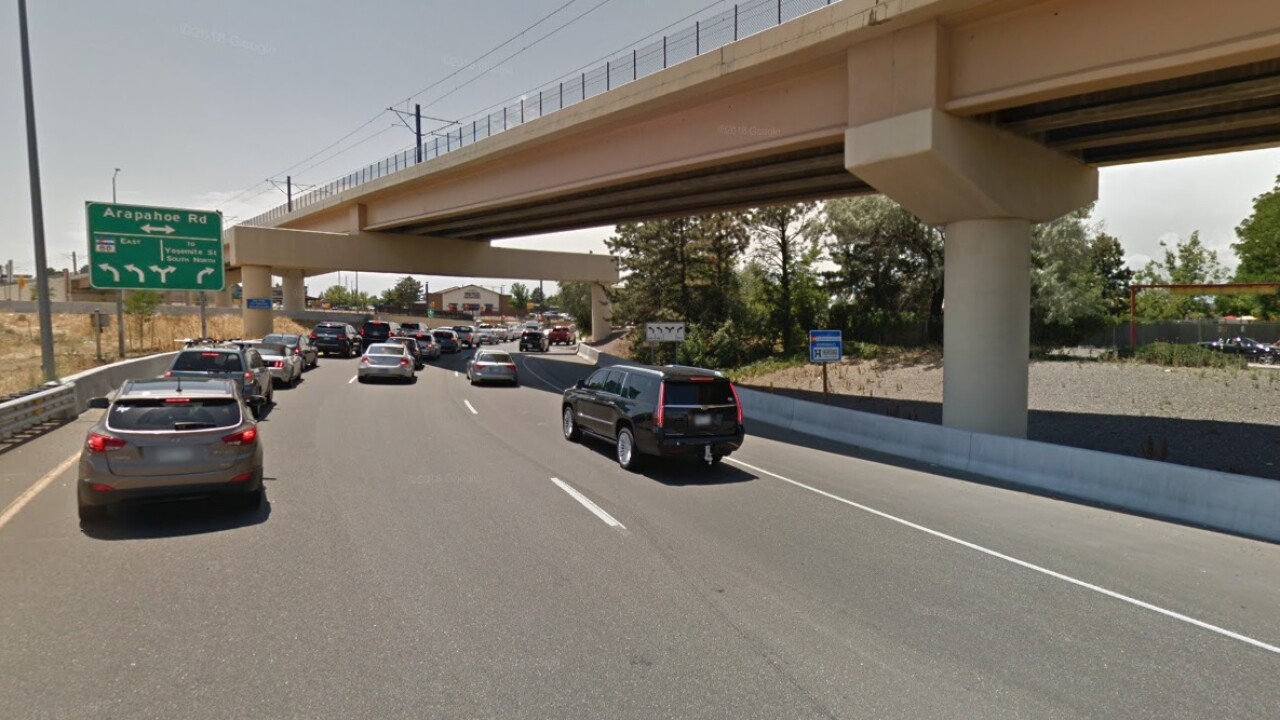 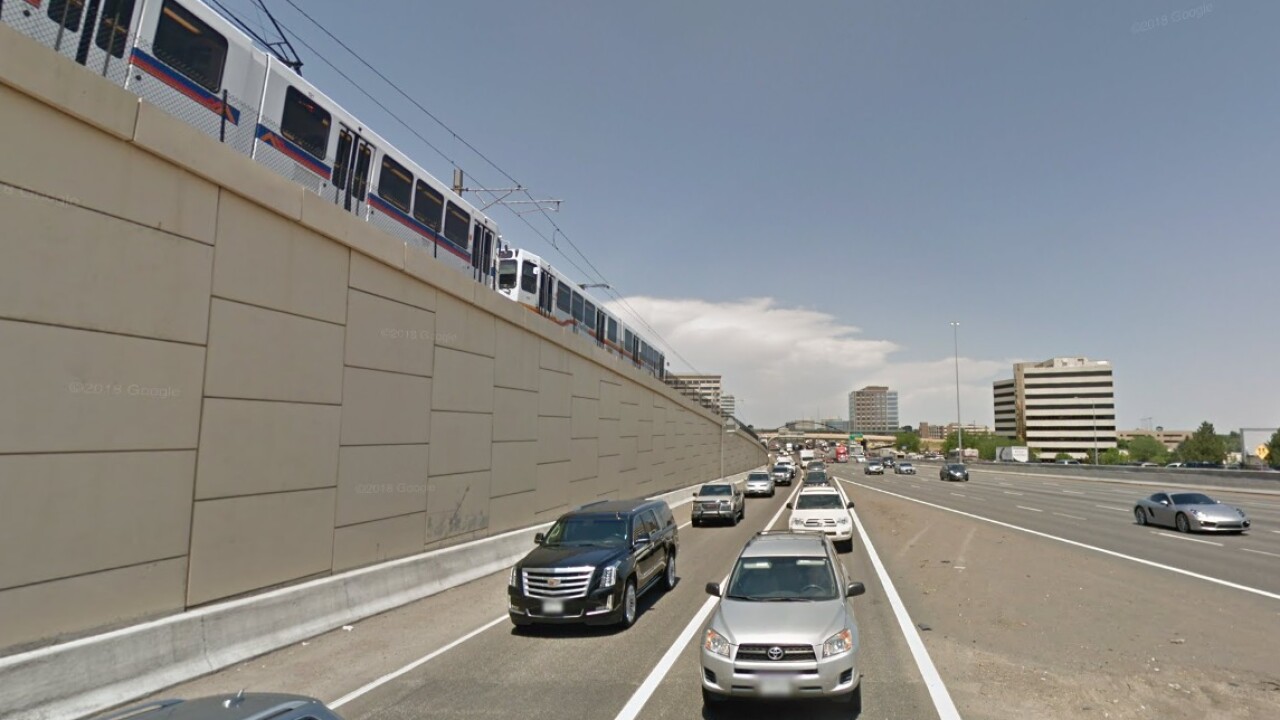 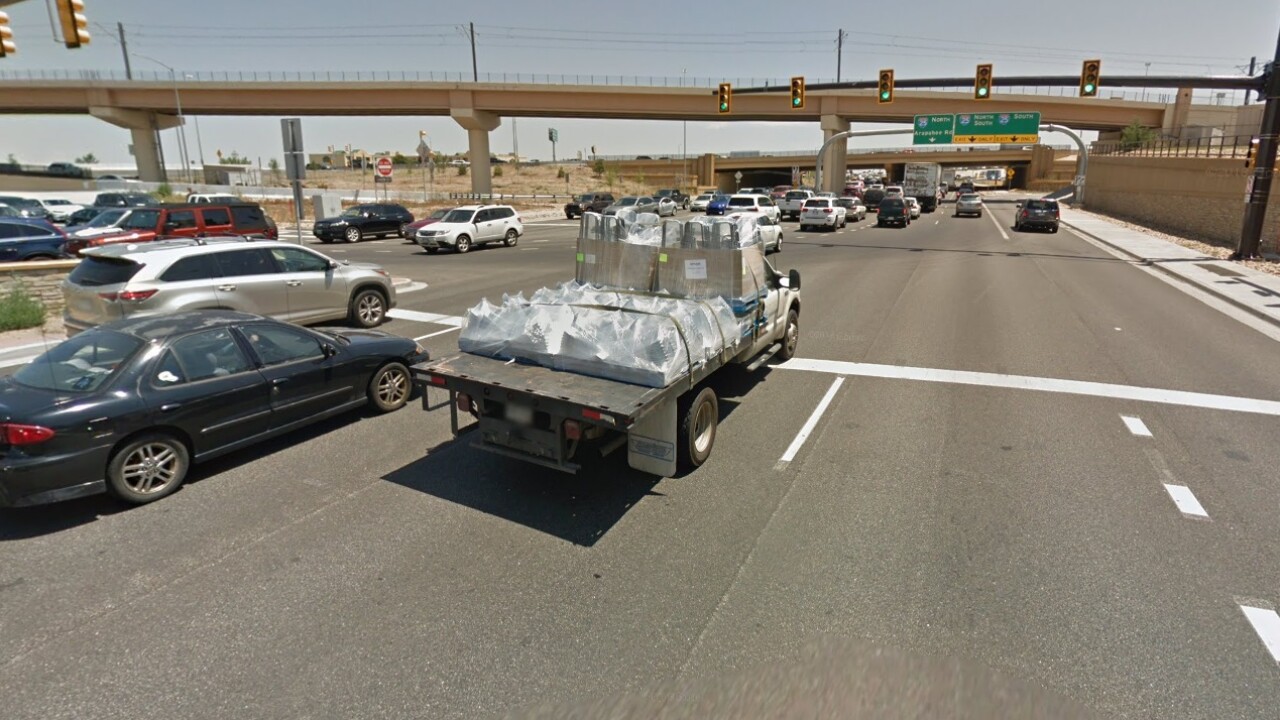 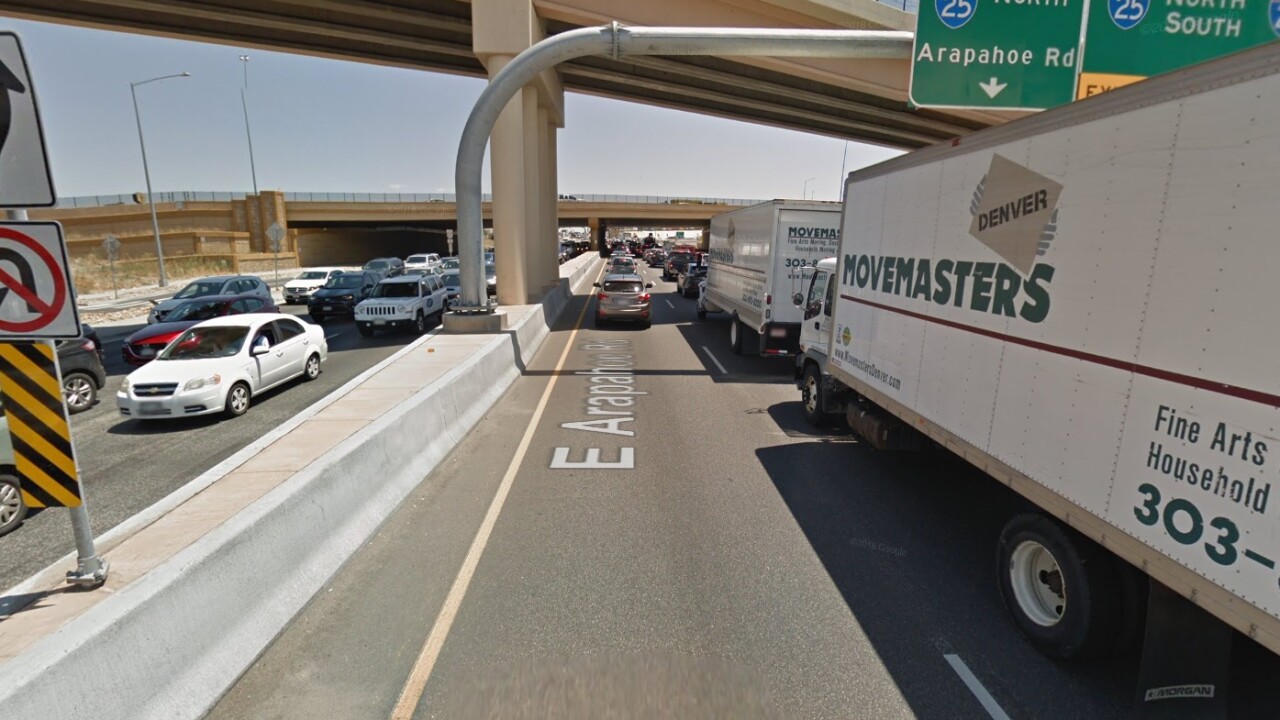 Erika from Centennial writes, “What is driving you crazy? The updated Arapahoe and I-25 interchange. I thought this was all done for safety reasons to keep traffic from backing up on I-25 South from people getting off at Arapahoe. Nothing has changed. It's still just as bad as ever before. Not to mention the now idiotic way to go north on I-25. Having two lanes but one also goes straight eastbound Arapahoe so it's virtually useless. Why was this construction done and what did it fix? Not apparent to me.”

Erika, there is more to the design and traffic problems on Arapahoe Road at I-25 than meets the eye. The main reason for the most recent project was to replace what CDOT said was a structurally deficient bridge. The other safety and design changes were rolled into the project after CDOT received money from local and the Federal government. The real reason for the backup on that ramp every day is TREX. Before we discuss this current problem, I think we need to look at some of the history of this interchange over the last 20 years.

That interchange is one of the busiest in Colorado. The average traffic volume every day on I-25 at Arapahoe Road is about 260,000 vehicles. And Arapahoe Road is one of the busiest off highway roads around metro Denver with about 72,000 vehicles using it at I-25 every day. The project that you are talking about finished up last spring where CDOT performed a total replacement of the I-25 bridge over Arapahoe Road. They also improved the Arapahoe Road interchange under and at I-25 to, in their words, reduce congestion and improve traffic operations and safety. That is obviously a statement you would take umbrage with.

In 2002, the I-25/Arapahoe Road interchange was significantly rebuilt during the Transportation Expansion (T-REX) project and, although overall improvements were discussed, no capacity improvements on Arapahoe Road were made due to funding limitations. TREX added lanes on I-25 and the southbound exit ramp at Arapahoe Road was modified to accommodate the light rail bridge piers, which made the operations of the exit ramp worse by introducing sight distance restrictions and future design change limitations.

8 years later, CDOT came up with a unique approach they thought would help move eastbound and westbound Arapahoe Road traffic better. A new through lane each way was added, separated from the two existing through lanes by the bridge piers that were holding up I-25. The new configuration was a bit confusing for drivers at the beginning, but most got used to it. The problem with the unusual pier separated lane configuration, it never allowed for the best flow of traffic. It was basically a low-cost band aid paid for by TREX contingency funds to cover up the higher cost rebuild that was planned for but couldn’t be funded at that time.

The latest and greatest improvement project at I-25/Arapahoe wrapped up last year. The $66 million project included a total replacement of the I-25 bridge over Arapahoe Road as well as rebuilding Arapahoe at the Yosemite Street, I-25 and Boston/Clinton Street interchanges. Anecdotally, after using the new and improved interchange for several months, to me, as it is for you Erika, it doesn’t seem that traffic is flowing dramatically better than before the project.

I talked to CDOT engineers about your concerns and disagree with us, “A check of the detailed data on traffic volumes and patterns indicate that travel times along the segment of Arapahoe from Quebec to Havana this year are almost one minute shorter than they were prior to the project despite an increase in traffic of about 6% in the same period. This equates to a delay reduction of about 1,000 vehicle-hours per day.”

I also asked about the ramp delays, specifically coming from southbound I-25 to Arapahoe Road. CDOT engineers tell me, “Unfortunately our INRIX data does not include ramps. However, the data for the segment of southbound I-25 between Dry Creek and Orchard does indicate some improvement between the current and prior year, about 15 seconds reduced travel time on average. This could be a result of reduced queue spill-back from the SB off-ramp to Arapahoe. CDOT appreciates your comments and they are helpful as the agency evaluates the impacts of the construction project.”

Even so, I routinely see traffic backed up in both exit lanes from the traffic light back onto I-25 to just about the Yosemite Street overpass. I usually use Orchard or Dry Creek as a way around the backed-up ramp.

The major design problem remains the location of the five light rail bridge piers on the west side of I-25 at the southbound offramp to and at Arapahoe Road. CDOT, in previous interchange and corridor study reports, identified them as “the major barriers to making any significant Arapahoe Road design changes”.

Part of the report reads, “This straddle bent has reduced the sight distance for vehicles exiting the freeway and approaching the signal at Arapahoe Road, which has hindered the ramp operations. The bent also greatly limits the options for improving the Southbound I-25 off-ramp layout without reconstructing the LRT bridge.”
Structural engineers tell me it is possible to rebuild and move the light rail bridge piers, but it would take ‘lots and lots and lots of money”.

Because of this bridge pier design problem, CDOT suggested building a new tunnel under I-25 south of Arapahoe Road to reduce congestion on Arapahoe Road and provide and alternate route for east/west through traffic to bypass the interchange. That tunneled road would connect Yosemite Street on the west side of I-25 to Costilla Ave on the east side.

CDOT travel modeling suggested the tunnel would take 3000 vehicles per day away from the intersection but would do little to reduce the volume of traffic exiting southbound I-25 to Arapahoe Road and “additional capacity improvements within the immediate interchange area” would still be needed.

As you can imagine the residents of Walnut Hills and Hunter’s Hill on the west side of the proposed tunnels are not going quietly into that good night. Their concern is drivers using their neighborhood as a cut through from Quebec to the tunnel to avoid Arapahoe Road all together. At this point the huge expense and those residents remain the largest barriers to any tunnel construction.

Where do we go from here? Nowhere fast. There will be more studies in the future and more talk about the proposed tunnel under I-25 but at this point, and for the foreseeable future, we are stuck with the interchange as it is now and the daily delays that come with it.

Denver7 traffic anchor Jayson Luber says he has been covering Denver-metro traffic since Ben-Hur was driving a chariot. (We believe the actual number is over 20 years.) He's obsessed with letting viewers know what's happening on their drive and the best way to avoid the problems that spring up. Follow him on Facebook, Twitter or Instagram or listen to his Driving You Crazy podcast on iTunes , Stitcher , Google Play , Podbean or YouTube .