Driving You Crazy: Is it illegal for motorcycles to split lanes on Colorado highways? 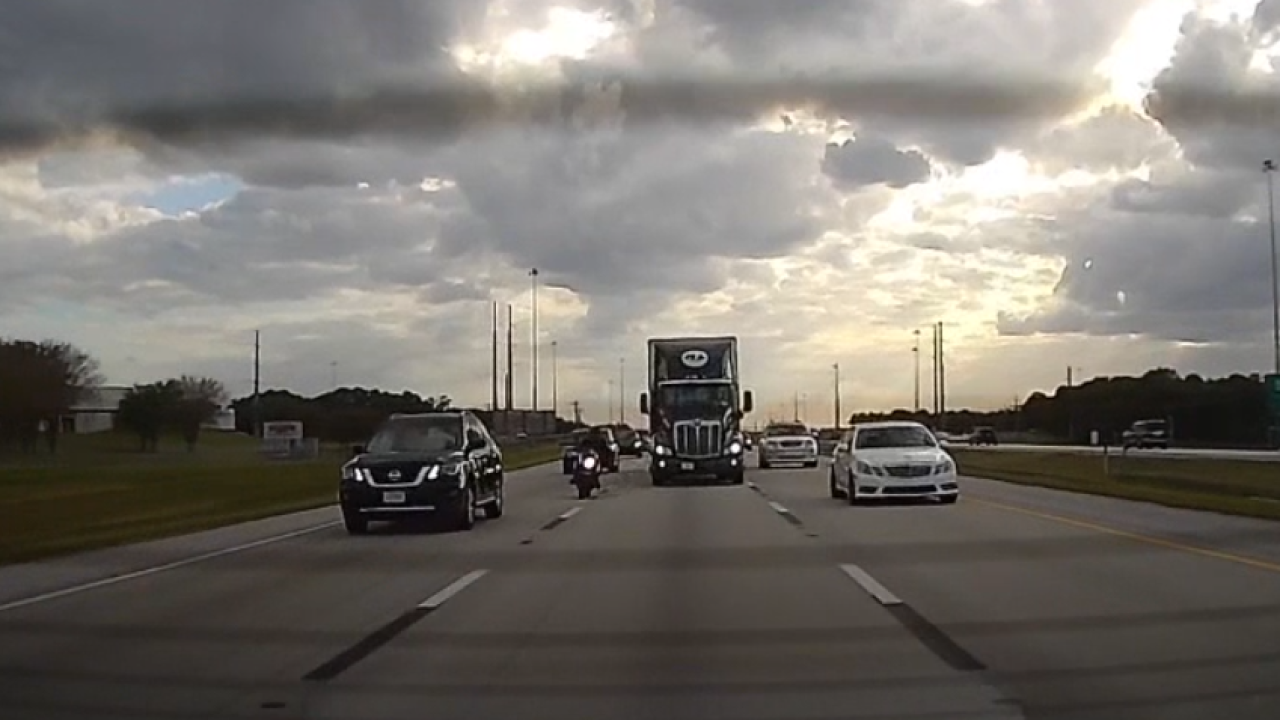 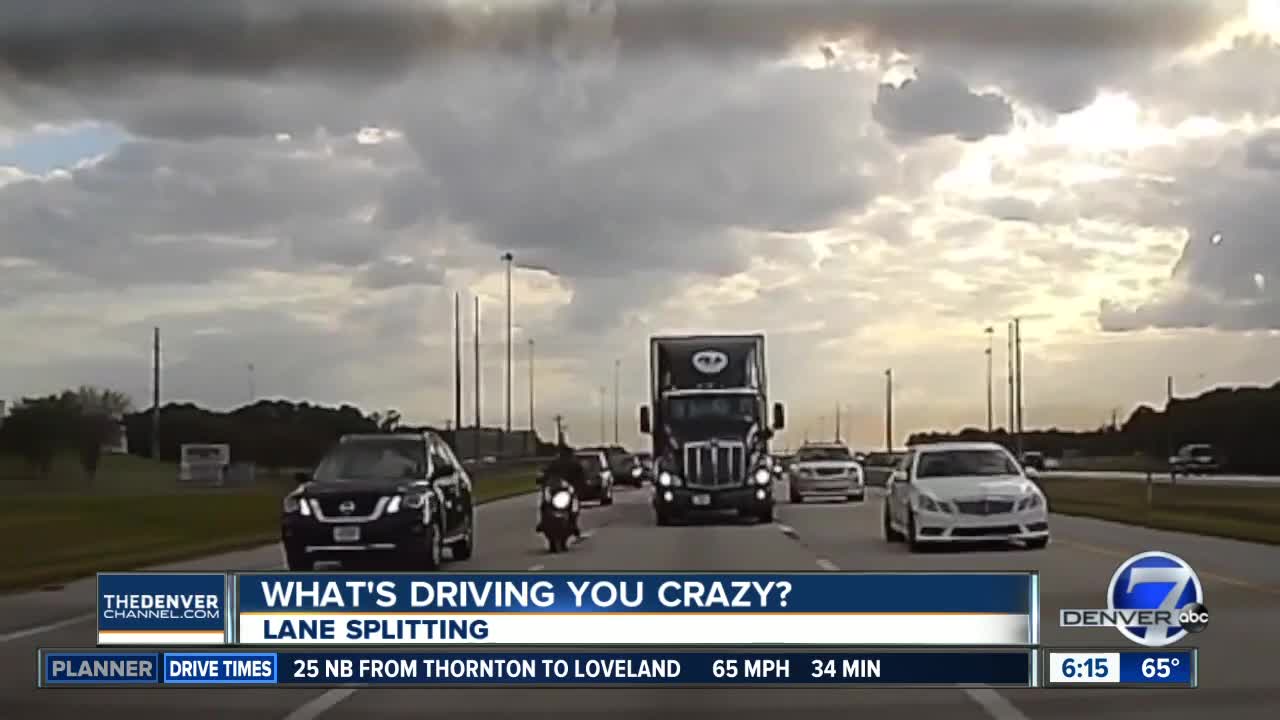 Robynn from Denver writes, “What's driving you crazy? I am under the impression that it is illegal for motorcycles to split lanes on Colorado highways and roads. I've seen an increasing number of bikers pull this move regardless, with seemingly no repercussions and it's dangerous in a place where people aren't expecting it. Similarly, I thought it was illegal for bicyclists to split lanes as well, although they seem to do so constantly. My understanding is that they are to ride to the right of the furthest right lane possible, and otherwise follow all laws as any other vehicle would. Am I right about either of these scenarios?”

You are correct about both of those situations, Robynn. The lane splitting you are thinking about by motorcyclist and bicyclists is not legal. Not only that, it is extremely dangerous.

The only kind of legal lane splitting in Colorado is when the splitting involves two motorcycles using the same lane. According to the Colorado Motorcycle Operator’s Handbook, it is also illegal for a motorcycle rider to pass or overtake a vehicle in the same lane as is sharing a lane with cars. However, motorcycles can share a lane or "co-ride" with one other motorcycle.

Lane splitting on a bicycle is basically the same thing as on a motorcycle but it’s mostly the practice of riding a bike between lanes of slow-moving or stopped traffic in a congested urban area. It’s a way of maneuvering around congestion by taking advantage of the openings between larger vehicles and using the space between lanes or the road shoulder. Denver Police says, “bicyclists in Denver must follow all traffic laws and must ride to the right when possible”.

In 2016, the Colorado legislature attempted to pass HB 16-1205, which would have legalized lane splitting for motorcyclist in limited situations:

That bill was defeated in committee with an 8-5 vote. Many people in the motorcycle community supported the bill citing statistics showing lane-splitting to be a much safer alternative to motorcyclists sitting in traffic. There is a Facebook group called Lane Splitting Colorado that is still advocating for making the practice legal here.

Lane splitting is specifically allowed by law in only one state, California. Other states, like Colorado, either prohibit the practice all together or don’t really address it, leaving it up to individual officers to consider whether the lane splitter is driving recklessly.

Just this year, Utah passed House Bill 0149 that allows a motorcyclist to legally travel between lanes of stopped traffic but the rider cannot exceed 15 mph. The law further restricts the lane splitting to roads with speed limits under 50 mph thus eliminating the ability to do this on any Utah interstate.

In 2018, Hawaii passed House Bill 2859 which authorizes the Department of Transportation to allow two-wheeled motorcycles to drive in designated shoulder lanes with the goal to prevent rear-end crashes. Riders are only permitted to use a designated shoulder when road traffic is completely stopped, and must leave the shoulder when traffic begins moving again.

Colorado State Patrol Trooper Gary Cutler tells me the increase in lane splitters in Colorado might be a direct result of our rapid growth. “I'm not sure if it’s an influx of riders coming from California (which does allow lane splitting) or they are just doing because of traffic”. Motorcycle riders who are cited for lane splitting in Colorado commit a Class A traffic infraction, which is punishable by a fine. These fines can range from about $15 to $100. The rider can also get points on their driving record.

Splitting or sharing a lane is often dangerous and can lead to crashes and even fatalities. A study performed by UC Berkley looked at around 6,000 motorcycle crashes and determined many of the riders were hit from behind from inattentive drivers while sitting in slow traffic. When motorcyclists attempt to pass between cars, a driver could make a quick turn to the left or right, clipping or colliding with the motorcycle. According to the Sawaya Law firm, if a motorcyclist is injured while attempting to illegally overtake another vehicle within the same lane, the other driver’s insurance company will likely try to argue that you should not be compensated for injuries. Lawyers there say this is a very serious consideration, because even a minor impact could result in expensive medical treatment. Colorado law also allows for a reduction in the potential compensation if a motorcyclist shares responsibility for injuries incurred in a wreck.

When it comes to bicycles, they too are not allowed to split lanes. According to Colorado law, riders are required to stay on the right side of the lane and in a designated bike lane if available. Bike riders are allowed to ride next to each other as long as they are not impeding traffic. When riders come to an intersection and a right turn lane appears, they are allowed to move to the right side of the lane that will continue to go straight. The same rule applies if the bicyclist is going to make a left turn at an intersection, they can move over to the left lane.