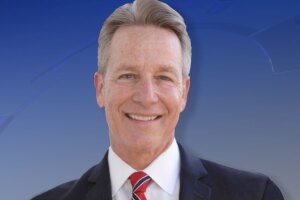 Tom Mustin co-anchors the weekend newscasts at 5 and 10pm.

Tom Mustin co-anchors the weekend newscasts at 5 and 10pm. A familiar face to Denver television audiences, Tom joined Denver7 in August of 2018, after 15 years as an award winning anchor and reporter at another local station.

In his more than 20 years as a broadcast journalist, Tom has covered some of the biggest stories in the state -from the Hayman fire, to historic floods, to the Aurora Theatre Shooting. His live coverage from the Democratic National Convention highlighted his team’s Emmy award winning entry for “Best Newscast.” In all his work, Tom strives for compassion, fairness and empathy.

Tom is the son of a three star Navy Admiral. A native Virginian, he is proud of his family’s military heritage. In 2005, he covered the commissioning of the U.S.S. Mustin in San Diego- a destroyer named for Tom’s father and other relatives.

Tom enjoys giving back to the community. He has served as a spokesman / emcee for several important organizations including, Make-A-Wish, Reading Partners, The Adoption Exchange, and The Downtown Denver Partnership.

Tom and his wife Carolyn have three children and a Silky Terrier named Rocky.

When he’s not home cheering on his Virginia Tech Hokies, Tom can be found running Colorado’s trails, climbing 14ers, or playing his guitar.