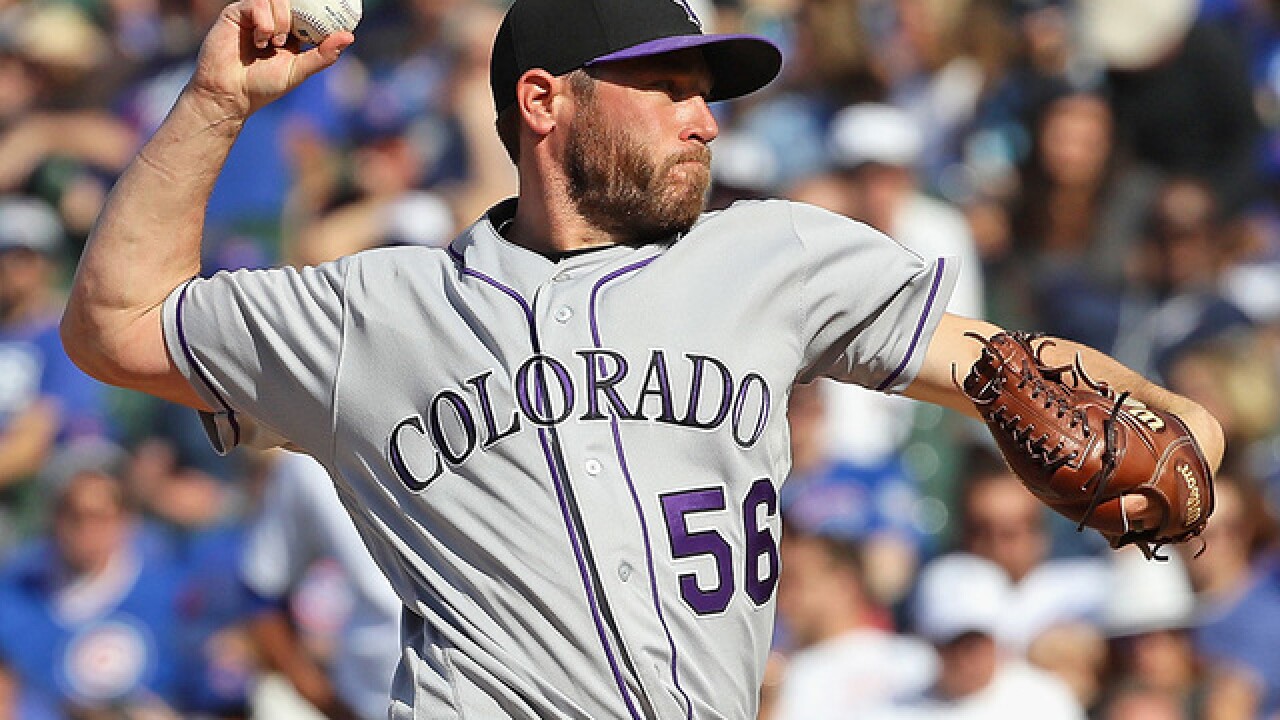 Copyright 2017 Scripps Media, Inc. All rights reserved. This material may not be published, broadcast, rewritten, or redistributed.
Jonathan Daniel
<p>CHICAGO, IL - JUNE 09: Greg Holland #56 of the Colorado Rockies pitches in the 9th inning for a save against the Chicago Cubs at Wrigley Field on June 9, 2017 in Chicago, Illinois. The Rockies defeated the Cubs 5-3. (Photo by Jonathan Daniel/Getty Images)</p>

CLEVELAND -- Yan Gomes hit a three-run homer with two outs in the ninth inning off closer Greg Holland as the Cleveland Indians rallied for four runs in their last at-bat for Corey Kluber and beat the Colorado Rockies 4-1 on Tuesday night.

After Austin Jackson tied it with a two-out bloop RBI single, Gomes connected on the first pitch from Holland (2-3), driving it into the seats in center field to touch off a wild celebration in Progressive Field.

Gomes flung his helmet and skipped around the bases as the Indians players danced out of their dugout at the improbable walk-off win.

Kluber (10-3) deserved it. The right-hander gave up three hits, struck out 11, threw his second straight complete game and continued his dominance since returning from the disabled list on June 1.

But if not for Jackson's heroics against Holland, the majors' saves leader, and Gomes' eighth homer, Kluber would have taken a tough loss. Until the Indians' late rally, Charlie Blackmon's homer on Kluber's second pitch looked like it might stand up as the game's only run.

Down to his last strike, Jackson fouled off three pitches before dropping his game-tying RBI single into right-center, the flair just eluding a diving Blackmon.

The Rockies honored late manager Don Baylor by hanging his No. 25 jersey in their dugout. Baylor, who died Monday at 68 after a long battle with cancer, led Colorado to the playoffs in 1995 -- the expansion franchise's third season.

Indians All-Star left fielder Michael Brantley sprained his right ankle in the fifth, going down after taking a few steps toward a fly ball. Brantley, who played in just 11 games last season following right shoulder surgery, started running after a fly to center when he pulled up. The 30-year-old dropped to the grass and had a concerned look on his face while being checked by a trainer.

Brantley, who was on the disabled list in June with a sprain to the same ankle, limped slowly off the field to an ovation and was helped down the dugout steps.

An inning later, the Indians announced the injury was only a sprain, a major relief for the club after it appeared Brantley could be seriously injured. The Indians made it to the World Series without Brantley last year, but they're so much better when he's in their lineup.