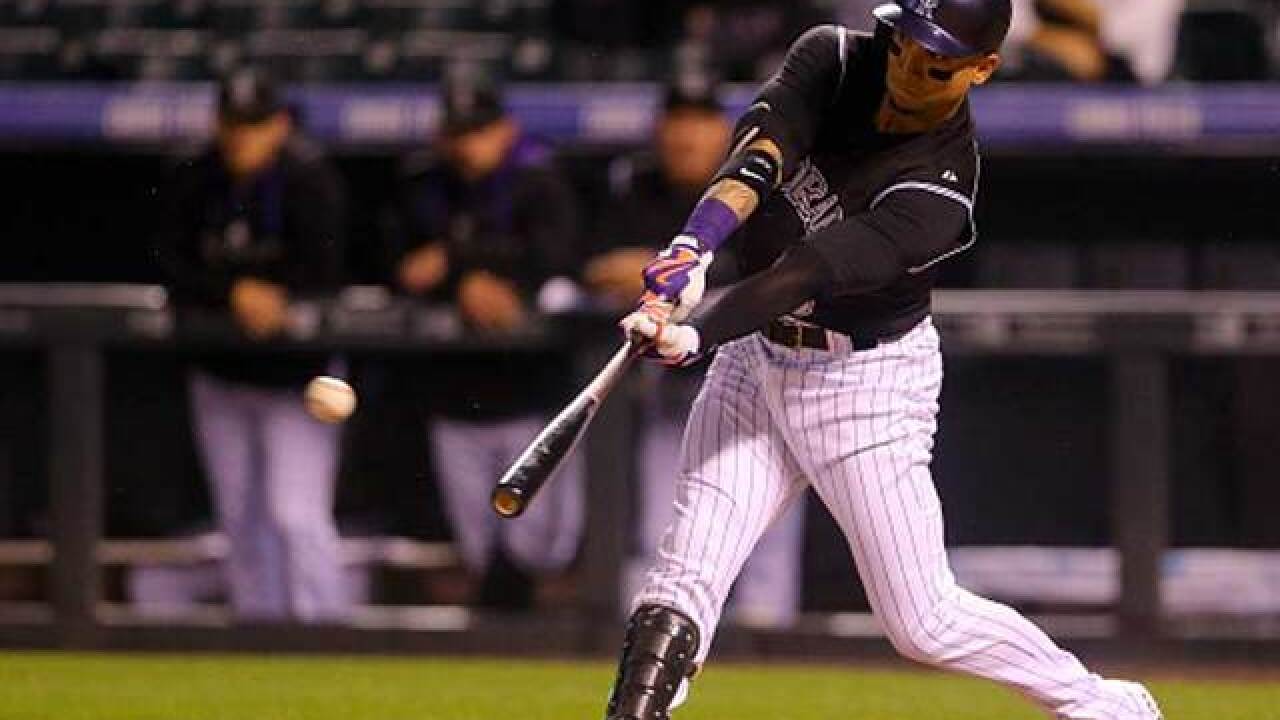 Copyright Getty Images
<p>Carlos Gonzalez #5 of the Colorado Rockies hits an RBI double during the first inning against the Atlanta Braves at Coors Field on July 9, 2015 in Denver, Colorado. (Photo by Justin Edmonds/Getty Images)</p>

Spending last week embedded in the Rockies’ spring training camp, I kept asking players, coaches, executives, media and anybody else who would listen (ushers, beer salesmen) why the team hadn’t re-signed free agent Carlos Gonzalez. And I kept getting the same answer: "Well, maybe at some point."

This is some point, and there’s no "maybe" any more.

One of the most productive and popular players in Rox history is returning to where he belongs.

He should be up there on the Mt. LoDo of Rox outfielders with Larry Walker, Dante Bichette and Holliday, and the club probably will carve out another spot for Charlie Blackmon.

But Carlos was outstanding late in the season – hitting .377 in September-October and finishing the second half of the season (64 games) with a .314 average.

And he remains one of the game’s premier defensive right fielders.

There’s a place for him on this club that’s trying to get back to the post-season.

Not at $20-plus million, but a reasonable number.

While I was in Scottsdale, Nolan Arenado campaigned publicly for CarGo. The Rockies miss his September, not April, bat and his consistent fielding, but they may miss him more in the clubhouse. Despite his injuries and tumbling stats in recent years, CarGo always was upbeat, never caused one iota of a problem in Denver on or off the field, was beloved by the fans and was an inspirational leader to the other players, especially the younger Latinos on the roster.

Homecoming is good. Ask Chris Iannetta. I did. He’s thrilled to be back in Denver, too.

Gonzalez and Iannetta are the last vestiges of the 2009 Rox who reached the postseason, and Iannetta was on the 2007 World Series team. Both will be instrumental veterans in a clubhouse mixed with youthful players from the Rockies’ farm system and older relief pitchers new to the team.

CarGo messed up by not accepting a four-year extension before last season, but he also did the Rockies a favor when he signed that massive contract years ago after telling agent Scott Boras he would give the team a hometown special.

Where does Gonzalez fit in this season? He should play primarily against right-handed pitchers and generally sit against left-handers (who he now has real problems with). He should play more home games than road games (because of the significant difference in splits), and he should be brought along slowly in April because of past problems of getting off to a fast start. He’s not an exceptional pinch-hitter, but Bud Black could also use him in that role and most definitely as a defensive replacement in right or left field late in games.

The Rockies have put in pencil (not pen) Ian Desmond in left, Blackmon in center and Geraldo Parra (now back at batting practice after suffering a wrist injury) in right. Raimel Tapia is expected to be a fill-in, and there’s David Dahl, returning after being out practically all of last season because of injury. With Gonzalez, that makes six outfielders – one too many. The Rockies will carry only five.

Who’s the odd man out?

Either Dahl or Tapia probably will start the season in the minors. Dahl looked healthy and strong last week with a couple of homers. Perhaps Tapia gets more seasoning. Do the Rox try to trade Parra, another clubhouse favorite? Does Desmond move more to first base more often? Despite some reports to the contrary, he has been playing in games at the position. He doesn’t stand out at first or even in left defensively, and he didn’t hit as he was supposed to last season.

Would there be a chance of some team trading for Desmond. Not at the $20-plus million he’s receiving this season. The Rockies are stuck with Ian.

Black may go with Pat Vailaka (oblique strain) as the backup at all four infield positions.

But, there’s this: I also asked about Mark Reynolds, who is sitting home. The Rockies should bring him back, too, to alternate with Ryan McMahon at first. And McMahon also plays second and third.

In the meantime, the Rockies made a great call (a cellphone call) to one of their own.