Woody Paige: The Colorado Rockies could be a wild-card team again 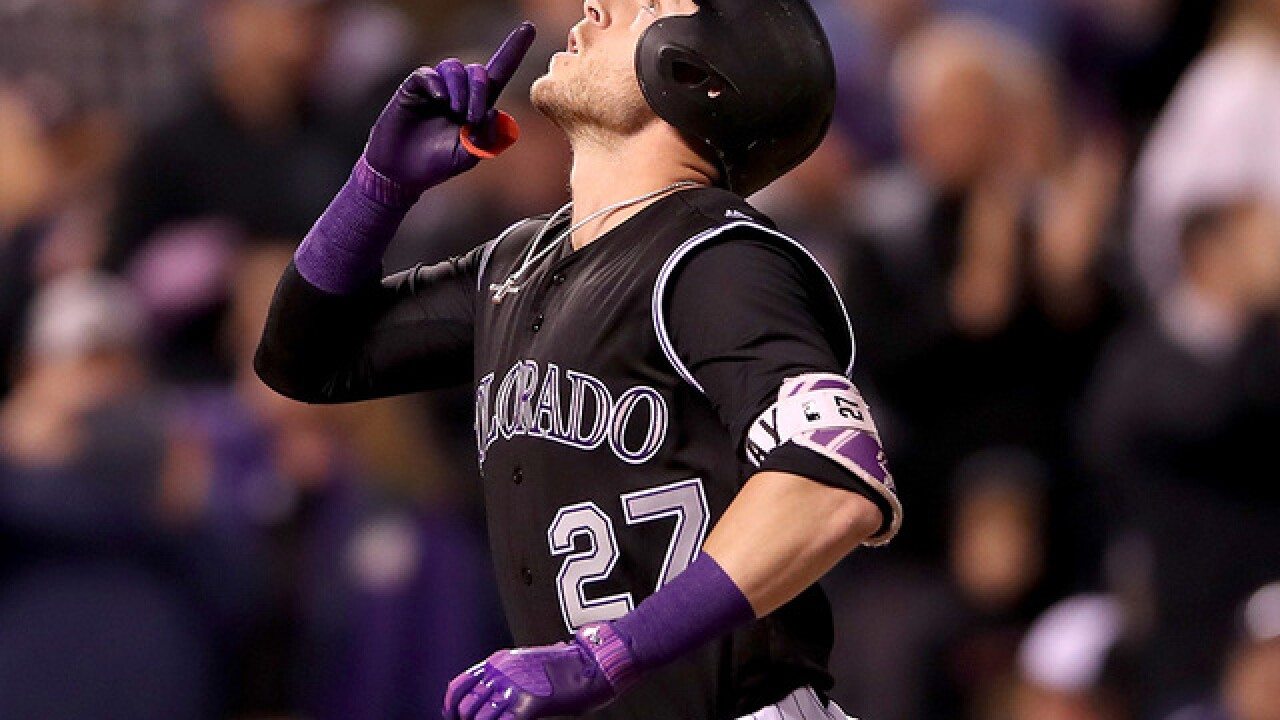 Copyright 2017 Scripps Media, Inc. All rights reserved. This material may not be published, broadcast, rewritten, or redistributed.
Matthew Stockman
<p>DENVER, CO - SEPTEMBER 29: Trevor Story #27 of the Colorado Rockies celebrates as he crosses the plater after hitting a 2 RBI home run in the fourth inning against the Los Angeles Dodgers at Coors Field on September 29, 2017 in Denver, Colorado. (Photo by Matthew Stockman/Getty Images)</p>

DENVER -- Playing their first Cactus League exhibition Friday, the Rockies have a prickly past and a promising present.

Certainly, they made the post-season for the fourth time in history last season (and reached the World Series a decade before), but they’ve they gotten that far only 16 percent of their years in baseball.

And the Rox never finished first in the division over a quarter of a century.

Can they break that dubious streak in 2018?

In all probability, not unless Dodger Stadium drops into the Pacific Ocean. L.A. is picked by everyone not wearing Rocky Mountain purple to win its sixth straight National League West.

Nevertheless, the Rockies, who finished third in the division last season with an 87-75 record, could be a wild-card team again. They did have a franchise-record run before the All-Star break and conquered their fear and loathing on the road by winning 41 and losing 40. If they could duplicate that mark away from home and win more than 50 in LoDo, perhaps they’d benefit with the winner-take-all one-game playoff at The Keg.

Still, the NL West will be improved, and the division produced three post-season clubs in ’17. The Giants are recovering, and the Padres just signed a major addition.

The Rockies and the Diamondbacks started off on Friday with what they finished off in that one playoff game in Phoenix last October. The two teams that share the same spring training facility in Scottsdale also will begin the regular season at the end of April with a three-game series in Phoenix.

The great news for the Rox is they didn’t lose much from last season – except for long-time stalwart and diminishing star Carlos Gonzalez; they gained a bullpen that could rank as the best in baseball, and the team’s young starters got a valuable season of experience.

The not-so-good news is the Rockies still need a real first baseman and another home run bat.

They could fill those two needs with one guy – free agent Logan Morrison.

The Rockies have a projected payroll of about $135 million (with 13 players under guaranteed contracts), but franchise brass has indicated it would be comfortable with salaries totaling $150 million – and should after taking more than $42 million off the books with Gonzalez and Jose Reyes (still owed $4 mil). And the Rockies were injected with $50 million spread around the teams from the sale of an analytical service.

Morris, one of the extraordinary number of veteran free agents left out of camps, would be affordable on a 3-year, $15 million deal – and solve the problem at first base. Ryan McMahon is a young talent, but he struggled after being brought up late last year and really is a second baseman. He’s penciled in (notice: in pencil) as the starting first baseman. And Ian Desmond, the $70 million mistake a year ago, is the backup – even though he proved in ’17 he can’t play the position, and doesn't really want to. He’s actually a shortstop in left.

The Rockies chose not to bring back Mark Reynolds, who was the positive position bonus of last season. He had 30 home runs on a hometown discount. Reynolds is a free agent again, and likely will be the "other" first baseman the Rox grab if the sides agree on another "Denver-friendly" contract.

Morrison could be, though, the long-term solution, especially if he can put up home run and run production numbers as he did after changing his swing and philosophy at the plate. He’s more of a hard-swinging, fly-ball, home-run hitter than before. He even upgraded his defense last season and is above average. Morrison should be in his peak years.

Put Morrison in a lineup with Nolan Arenado, Charlie Blackmon and Trevor Story, and that would be a Blake Street Bomber’s kind of row once more – with 140 homers. Not since Andres Galarraga, Dante Bichette, Larry Walker, Vinny Castilla and Ellis Burks pre-humidor era.

Move Blackmon into the middle of the offensive attack, and let Raimel Tapia lead off.

In Friday’s game, the Rockies opened with a lineup (minus Blackmon and Desmond) of Tapia (CF), DJ LeMahieu (2B), Arenado (3B), Story (SS), (former and current catcher) Chris Iannetta, David Dahl (returning from a season-long back injury) (RF) (, Pat Valaika (DH) and Mike Tauchman (LF), with Jeff Hoffman on the mound.