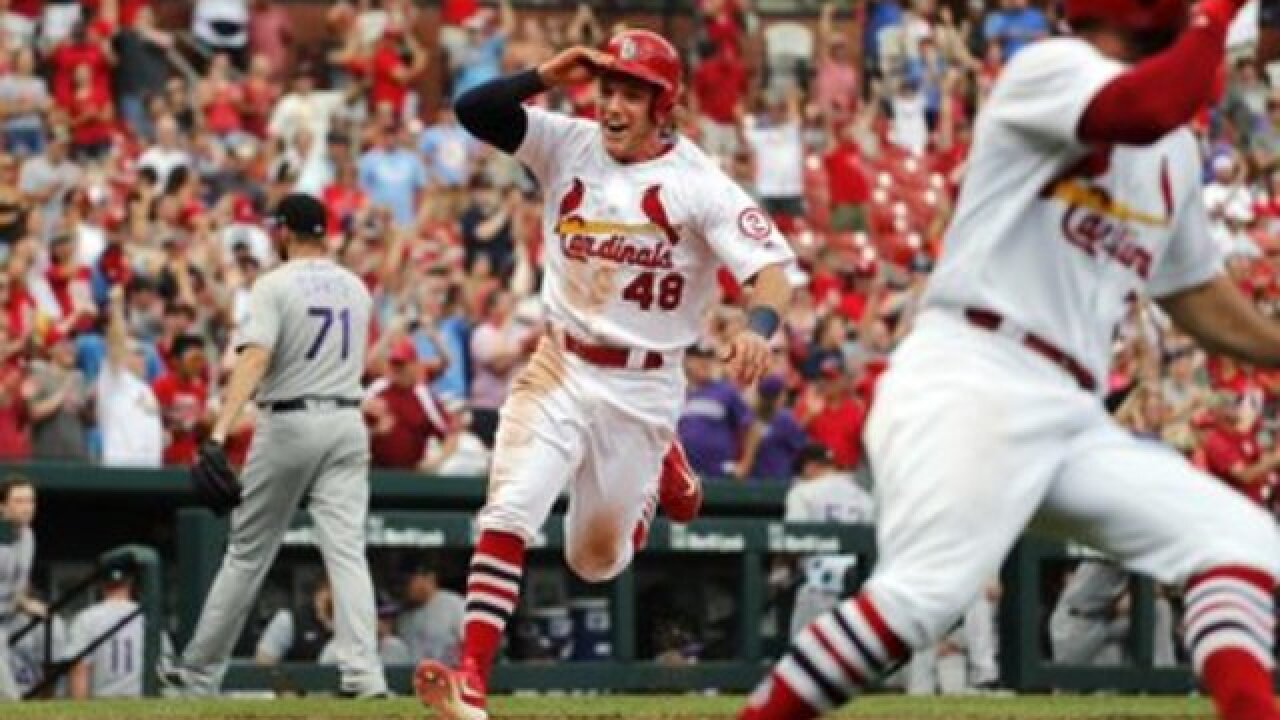 ST. LOUIS (AP) — Pinch-hitter Jose Martinez sliced an opposite-field single to the right-center field gap off Wade Davis with one out in the ninth inning, driving in the tying and go-ahead runs and lifting the St. Louis Cardinals over the Colorado Rockies 3-2 on Thursday.

Greg Garcia singled with one out against Davis (2-4) and took third on a single by rookie Harrison Bader.

Bader stole second, and Martinez singled on a high fastball, giving the Cardinals their ninth walk-off win this season.

Davis has a career-high five blown saves in 36 chances.

Colorado, which began the day one game back for the NL’s second wild card, lost three of four at the Cardinals. The Rockies had been seeking to tie the franchise record of nine straight series without a series loss but instead lost a series for the first time since dropping two of three at San Francisco from June 26-28.

Chasen Shreve (3-2), acquired from the New York Yankees on Saturday, pitched a perfect ninth in his second appearance for the Cardinals.

After the Cardinals loaded the bases in the sixth, Senzatela struck out Bader on a curveball in the dirt with an 0-2 count.

Tyler O’Neill put St. Louis ahead with a sacrifice fly in the third. Gerardo Parra had a tying single in the fourth, and Colorado went ahead when Ian Desmond hit a bouncer to the third-base side, and Mikolas made an off-balance throw that hit the tarp in foul territory in right field. Desmond was credited with a single, and Nolan Arenado came home from third on the error.

O’Neill made a running catch against the wall right-field wall in the first inning to rob Arenado of an extra base hit and a diving catch of a liner off of Trevor Story’s bat in the fourth.

Rockies: 2B DJ LeMahieu (left oblique strain) was reinstated from the 10-day DL and 2B Garrett Hampson was optioned to Triple-A Albuquerque.

Cardinals: OF Marcell Ozuna left in the fifth inning because of discomfort in one of his left toes. 2B Kolten Wong (left knee inflammation) began an injury rehabilitation assignment at Class A Peoria and is expected to join the team this weekend in Pittsburgh.