Trevor Story launched his 4th homer in the last three games, and the Rockies swept the Braves 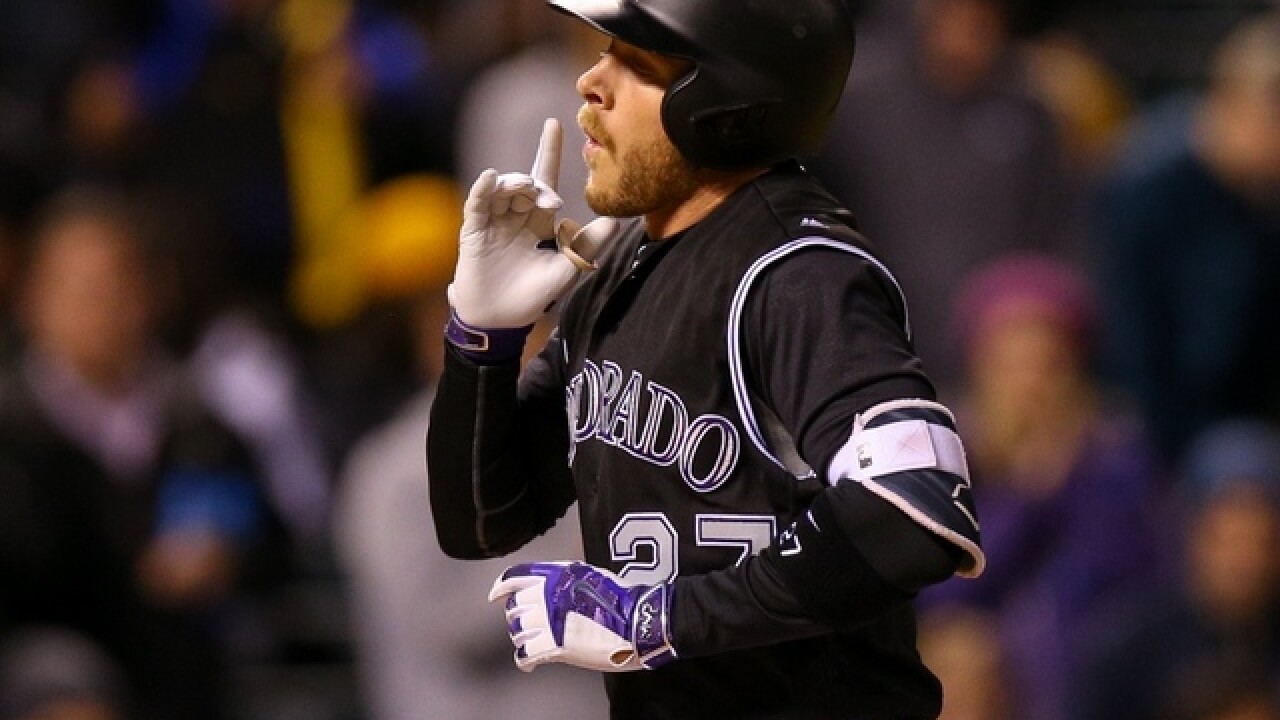 Nolan Arenado jumpstarted the offense with a three-run homer in the first andDJ LeMahieu added a solo shot in the fourth as the Rockies captured their 10th straight victory over the Braves at Coors Field.

Chatwood (9-6) finished with an intriguing line: a career-high eight walks, one hit -- Freddie Freeman's single in the first -- six strikeouts and no runs.

Story wore out Atlanta pitching in the four-game series, finishing 7 for 14 with four homers and nine RBI. He's one homer away from matching the Rockies' rookie record set by Wilin Rosario in 2012.

On top of that, Story made a sensational over-the-shoulder grab in shallow center to thwart a big second inning.

Chatwood walked a batter in every frame and left after throwing 97 pitches, just 51 of them for strikes.

Rockies reliever Gonzalez Germen surrendered both runs in the seventh. Freeman had an RBI double and Nick Markakis brought in the other on a grounder.

This certainly helped set the tone: The Rockies sent 10 batters to the plate as part of a four-run first. Arenado had the big hit with a rare homer to right.

Of course, the story of the day was the rookie shortstop. For the weekend, too. All season, for that matter, as Story began by hitting 10 homers in April, tying for most ever by a rookie.

"I don't like to look back on things right now," Story said. "I just put my head down and work every day."

Braves: RHP Julio Teheran threw from 90 feet Sunday and didn't feel pain two days after leaving a game early with tightness in his right lat. He remains hopeful he can make his next scheduled start. "We still have to wait," Teheran said. "I don't feel any pain and that's a good sign."

Rockies: OF Gerardo Parra (sprained left ankle) looks "real good," manager Walt Weiss said, and could head out for a rehab assignment as soon as this week. "He's got to pass a few more tests," Weiss said.

If Carlos Gonzalez's swing looks familiar, it's because he modeled it after Ken Griffey Jr., who was inducted into the Hall of Fame on Sunday.

Even Gonzalez's bat drop after a homer is borrowed from Griffey.

"I'm happy for him," said Gonzalez, who lives in Windermere, Florida, during the offseason and frequently runs into Griffey. "He meant a lot for the game and part of the reason I swing the way I swing is because of him. I've got to thank him."

Braves: After Monday's day off, Atlanta plays a two-game series in Minnesota. RHP Lucas Harrell (1-2) goes for the Braves on Tuesday and RHP Ervin Santana (3-8) for the Twins.