Broncos back to work for offseason conditioning 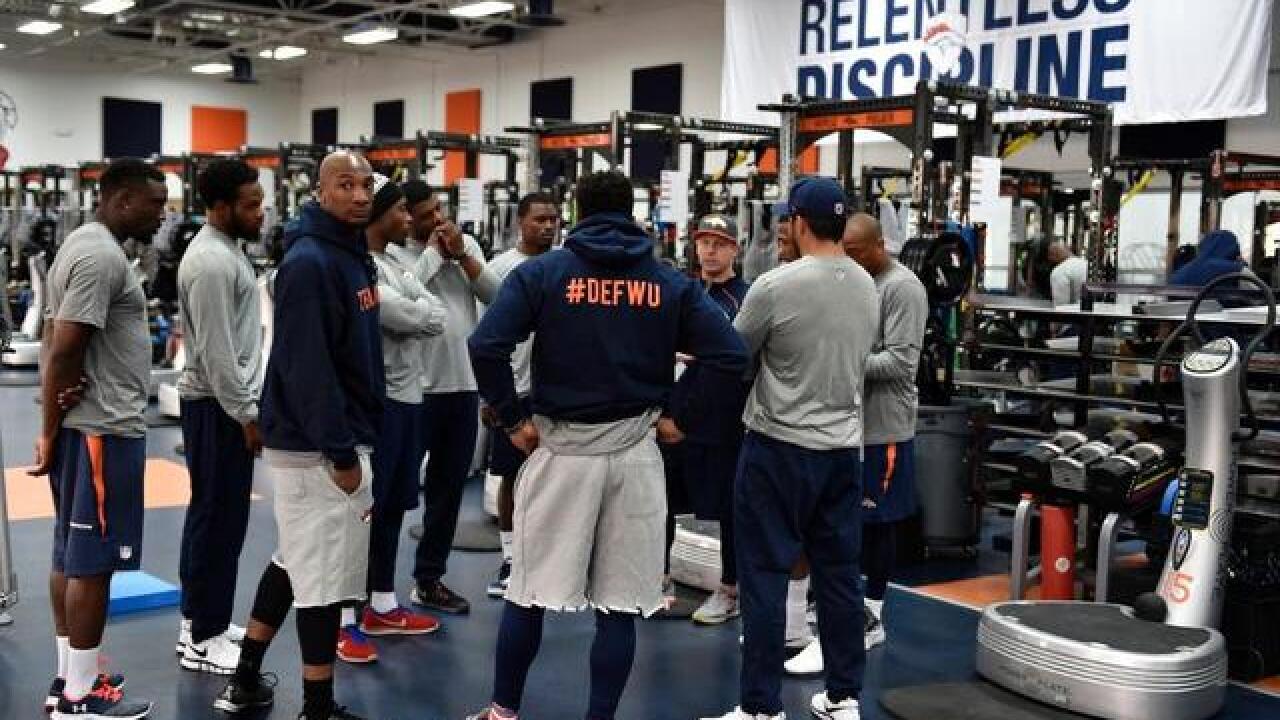 Von Miller is in California doing the jive with Lindsay Arnold on ABC's "Dancing With the Stars" and fellow outside linebacker DeMarcus Ware is in Alabama, where Gov. Robert Bentley will proclaim a day in his honor Tuesday.

Also absent when the Denver Broncos gathered for the start of their offseason program were quarterbacks Peyton Manning, who retired, and Brock Osweiler, who bolted to Houston in free agency.

"At the team meeting, I was just looking at Peyton's spot and he's not there. It's different," cornerback Aqib Talib said, noting that nobody was "bold enough" to sit in No. 18's place quite yet.

The departures of Manning and Osweiler leave the Broncos with journeyman Mark Sanchez, unproven Trevor Siemian and a whole lot of questions at quarterback.

That includes Ware, who restructured his contract this offseason, and is expected back in Denver on Wednesday.

There's no telling when Miller will return to the Broncos, who placed their exclusive franchise tag on the Super Bowl 50 MVP.

Miller hasn't signed his $14.129 million tag while his agent, Joby Branion, seeks a contract that would make his client the NFL's highest-paid defensive player.

The sides have until June 15 to work out a long-term deal or Miller would have to play the 2016 season on the franchise tag.

Miller's two sack-strips of Cam Newton led to Denver's only touchdowns in the Broncos' 24-10 smothering of the Carolina Panthers in the Super Bowl.

Since then, Miller has been on a tour of talk shows and guest appearances that has augmented his star power and could garner him the type of endorsements that might make it easier for him to play on the franchise tag this year if it comes to that.

Last year, receiver Demaryius Thomas skipped the Broncos' entire offseason program much to GM John Elway's chagrin before signing a five-year, $70 million contract on the deadline. But he didn't have the type of impactful season to which he and the Broncos have grown accustomed, finishing with just six TD grabs and none in the playoffs.

Talib said teammates don't begrudge Miller being on "Dancing With the Stars" instead of working out with them.

"It's super fun that he's on there," Talib said. "We support him in everything that he does. That's like a once-in-a-lifetime opportunity. He's doing a hell of a job at it. Hopefully he makes the (championship) and we all go out and support him. We'll take over the whole crowd."

One notable presence Monday was inside linebacker Brandon Marshall, who reported for duty even though he hasn't signed his exclusive rights free agent tender.

"That's huge," Talib said. "Just to see his face. Like Von, he's going through the business side of football. He's here. First step in getting better than he was last year is showing up. He's here. He's getting better, and that's a positive for us."

The Broncos begin defense of their title Sept. 8 against the Panthers, and Talib said he was eager to get back to work, suggesting, "all that congrats and all of the nights out — the wave, the wave gets tiring."

Sanders concurred, saying he asked Elway right after the Super Bowl if he enjoyed the celebration, "and he said, 'Yeah, but I was thinking about the next one.'"

"And that's how I feel right now," Sanders said. "I want to bring another parade to the city of Denver."