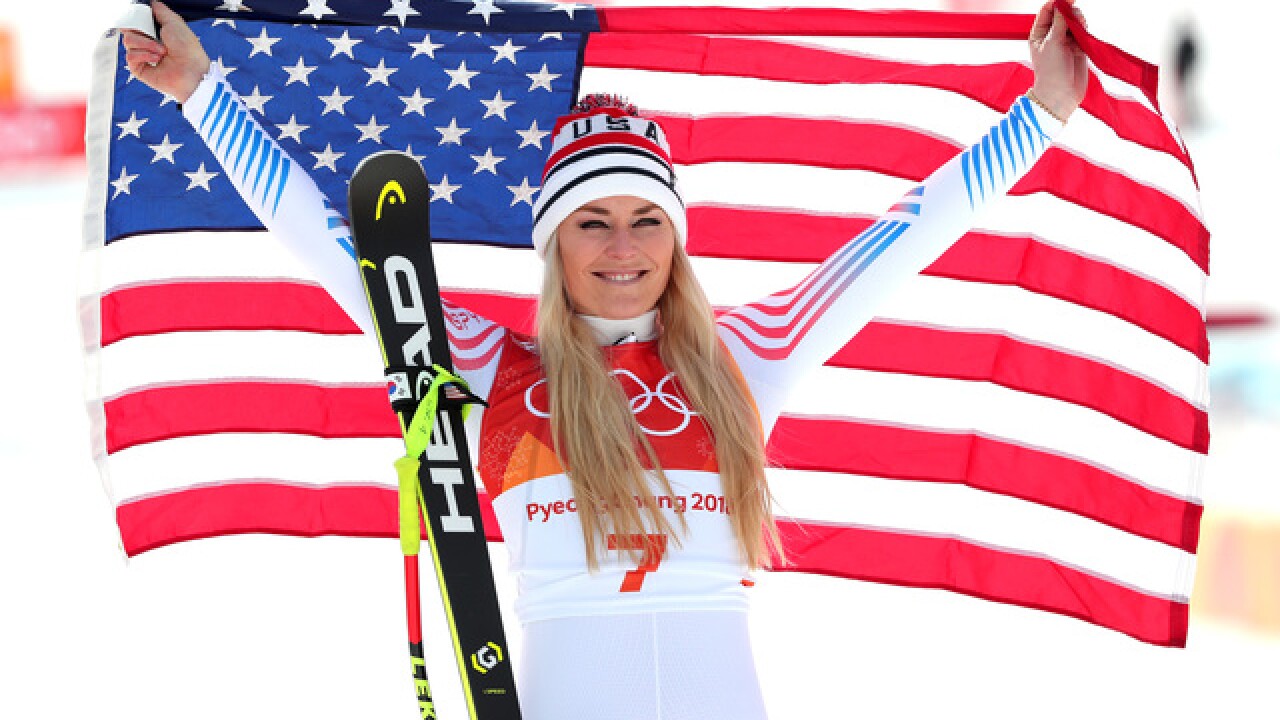 Copyright 2018 Scripps Media, Inc. All rights reserved. This material may not be published, broadcast, rewritten, or redistributed.
Tom Pennington
<p>PYEONGCHANG-GUN, SOUTH KOREA - FEBRUARY 21: Bronze medallist Lindsey Vonn of the United States celebrates during the victory ceremony for the Ladies' Downhill on day 12 of the PyeongChang 2018 Winter Olympic Games at Jeongseon Alpine Centre on February 21, 2018 in Pyeongchang-gun, South Korea. (Photo by Tom Pennington/Getty Images)</p>

JEONGSEON, South Korea (AP) — Lindsey Vonn cast a quick glance toward the sky after finishing what was likely her final Olympic downhill run, shrugged her shoulders after seeing her time and shook a friendly index finger at her good friend.

No one could catch Sofia Goggia of Italy.

Goggia won the women's downhill Wednesday at Jeongseon Alpine Center and Vonn earned bronze. The American was looking at a higher finish before Ragnhild Mowinckel of Norway turned in a surprise silver-medal performance as the 19th racer on the course.

Then again, shocking finishes seem to be the norm on this hill. Ester Ledecka of Czech Republic made a late charge last week from back in the pack to take the super-G title. She skipped the downhill to step back into the snowboarding realm and will go through qualifying Thursday in the parallel giant slalom.

"I gave it all today, skied a great race," Vonn said. "Sofia just skied better than I did."

At 33, Vonn becomes the oldest female medalist in Alpine skiing at the Winter Games. The record was held by Austria's Michaela Dorfmeister, who was just shy of her 33rd birthday when she won the downhill and the super-G at the 2006 Turin Olympics.

Vonn captured  the downhill gold at the 2010 Vancouver Olympics, but didn't get a chance to defend it four years later when she sat out the Sochi Games after tearing ligaments in her right knee. In a way, this was her "defense."

"If you think what's happened over the last eight years and what I've been through to get here, I gave it all and to come away with a medal is a dream come true," Vonn said. "You've got to put things into perspective. Of course, I'd have loved a gold medal but, honestly, this is amazing and I'm so proud."

This particular track just seems to suit Goggia's aggressive skiing. She also edged Vonn in March to win the only World Cup downhill contested on the hill.

Maybe mind games. Maybe a ploy. But each pointed to the other as the one to watch in the days leading up to the race. Goggia referred to Vonn as "definitely the favorite."

Goggia was behind at the top, but found another speed near the bottom. Vonn couldn't match it when she raced two spots later.

This was Goggia's first gold at an Olympics or a world championships. She has four World Cup wins — two of them at this venue.

"She's in her own world. She's a crazy girl but in a positive way," Germany's Viktoria Rebensburg said of Goggia. "She attacks full. She never quits and that's impressive."

Vonn has dedicated these Olympics to her grandfather  , Don Kildow, who died in November. She wears his initials "DK" on the side of her helmet as a tribute.

"It's been really hard for me not to get emotional for so many reasons, especially because of my grandfather," Vonn said. "I wanted to win so much because of him, but I still think I made him proud."

Mikaela Shiffrin didn't race downhill because of the altered Olympic program. When the Alpine combined was moved a day forward to Thursday, Shiffrin elected to skip the downhill race rather than compete in back-to-back days.

So now Shiffrin and Vonn will meet for the first time in an Olympics race during the last individual women's event. The combined adds the times of a downhill __advantage, Vonn — and one run of slalom — big advantage, Shiffrin.

Both are not planning to participate in the team event on Saturday to close out the Alpine skiing program.

On her Twitter account, Shiffrin said: "This. Track. Is. So. Fun! Only slightly bummed I'm not skiing it today cause we have 4 girls who are ready to hammer down and I can't wait to watch!"