hiSTORY: Trevor Story has most HRs in 6 games 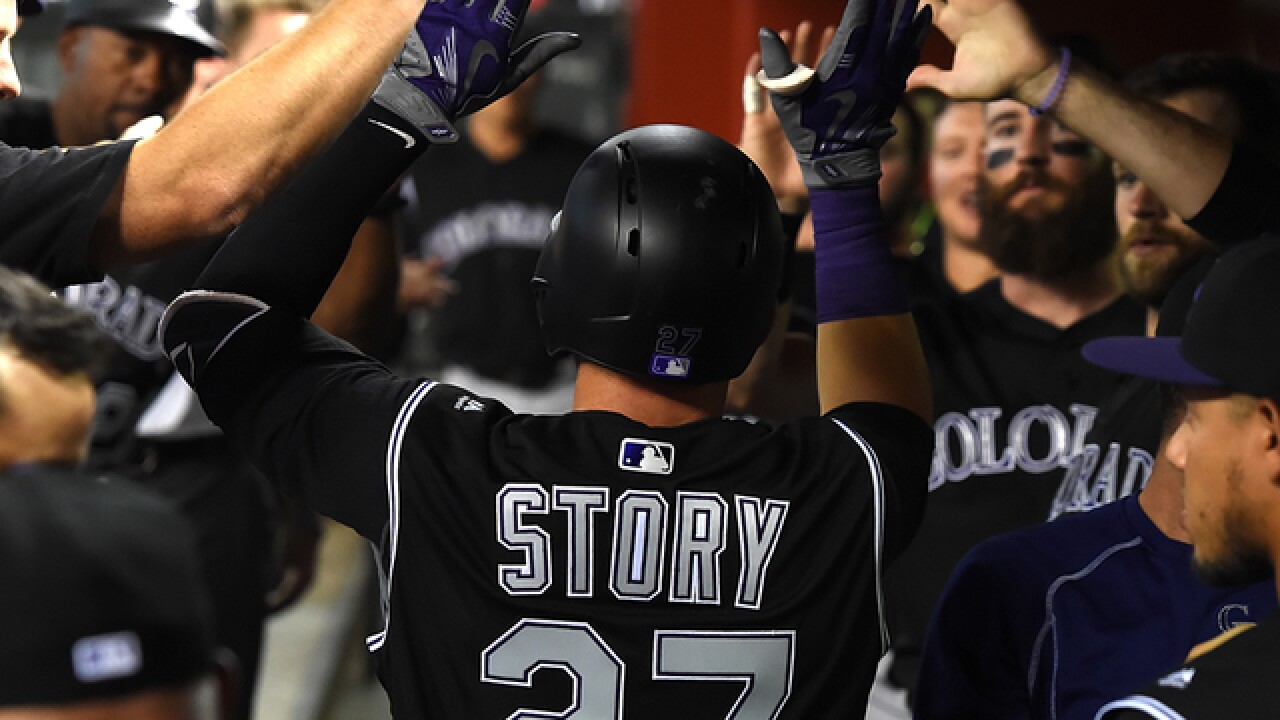 DENVER -- Rookie Trevor Story kept reporters milling around his locker for about an hour Sunday while doing what a team spokesman described as his first "monster workout" of the week.

Story isn't your typical, buffed slugger with the six-pack abs and bulging biceps. The 6-foot-1, 180-pound shortstop generates his tremendous bat speed and powerful punch at the plate with a strong core and terrific technique honed through five minor league seasons.

He uses his lower half well. That's usually where it comes from," Colorado manager Walt Weiss said. "The guys that hit from the ground up tend to have more power, and that's what he does very well. He really uses his backside. Yeah, that's where he generates. He's a strong kid."

Story capped his amazing first week in the majors by hitting his seventh home run Sunday and helping the Rockies beat the San Diego Padres 6-3.

"It has been fun so far," Story said.

Story's homer was one of five solo shots by the Rockies. Carlos Gonzalez went deep twice, and Nolan Arenado and Ryan Raburn also connected for Colorado, which salvaged the finale of its three-game series.

Story, whose home run streak ended Friday, after he had become the first player in the majors to homer in the first four games of his career, sent a pitch fromBrandon Maurer 425 feet into the left field bleachers in leading off the bottom of the eighth. The shortstop has 12 RBIs through six games.

Chad Bettis (1-0) allowed two runs, one of them earned, on six hits in seven innings. He struck out six and didn't walk a batter.

Bettis retired 13 consecutive batters at one point, a streak that ended withAlexei Ramirez's single in the seventh. Ramirez was thrown out by rookie catcher Tony Wolters, who picked up his first major league hit Sunday, while trying to steal on the next pitch.

San Diego scored a franchise-record 29 runs over the first two games at Coors Field, after becoming the first team in the majors to get shut out three times to start a season.

Cory Spangenberg's RBI double off Boone Logan in the eighth made it 4-3 before Miguel Castro came in to get the last two outs of the inning. Jake McGeepitched the ninth for his second save in two tries.

Gonzalez, who went back-to-back with Arenado in the first inning off James Shields (0-2), followed Story's homer with a 428-foot shot.

Batting second, before Gonzalez and Arenado, who received Silver Sluggers this weekend, Story is getting good pitches to hit. And "whenever he gets a pitch around the strike zone, he just hits it out of the ballpark," Gonzalez said. "Hopefully he can continue to do that for the entire year, and we're going to see a special season."

Shields gave up four earned runs on six hits -- half of them homers -- with two walks and two strikeouts.

"I made three bad pitches," he said.

San Diego manager Andy Green said the Padres went back to study Story's minor league at-bats to try to find some clues about how to keep him in the ballpark, but he didn't unearth any answers.