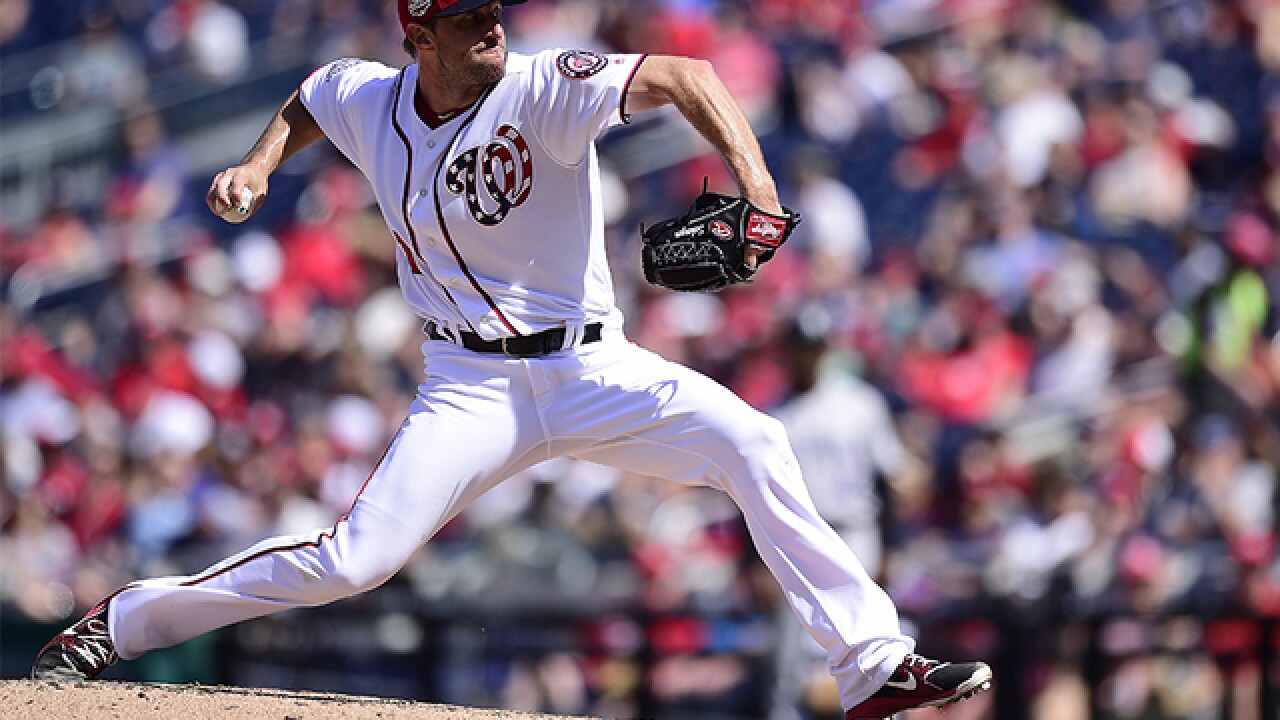 Copyright 2018 Scripps Media, Inc. All rights reserved. This material may not be published, broadcast, rewritten, or redistributed.
Patrick McDermott
<p>WASHINGTON, DC - APRIL 14: Max Scherzer #31 of the Washington Nationals throws a pitch in the seventh inning against the Colorado Rockies at Nationals Park on April 14, 2018 in Washington, DC. (Photo by Patrick McDermott/Getty Images)</p>

WASHINGTON (AP) — Before Saturday’s game at Washington, Colorado manager Bud Black stated the obvious in saying that Nationals pitcher Max Scherzer was one of the three best pitchers in baseball.

Black admitted afterward that Scherzer was even “better than we expected.”

Scherzer dominated after an early hiccup, striking out 11 and retiring his final 20 batters as the Nationals ended a three-game skid by beating Colorado 6-2.

Scherzer (3-1) issued a one-out walk in the first inning and Charlie Blackmon followed with a home run. That was all the Rockies managed against Scherzer, who has won the last two NL Cy Young Awards.

“Try and keep throwing up zeroes, keep working quick and let the goose eggs keep going and that seems to provide momentum for the offense,” Scherzer said.

Scherzer did his part, striking out the next five batters after the homer and going seven innings. He has fanned at least 10 in three of his four starts this year.

Matt Wieters hit his first homer of the season, connecting in the fourth. He added an RBI single in a four-run sixth that broke the game open for Washington.

Washington had scored just one run in each of the first two games of the series and had put up a combined five runs in Scherzer’s previous three starts. None of that worried Scherzer, who trusted the Nationals offense to break through, even if he had to get it on the act a bit.

Scherzer got Washington’s third hit of the game and reached second on a throwing error, one inning before the Nationals turned four hits into four runs in the sixth.

The Nationals scored their most runs in an outing since putting up six at Atlanta on April 3, a span of 10 games.

Blackmon, who had missed the last four games for Colorado with right quad tightness, hit his fifth homer of the season. The Rockies had won three in a row.

“I can’t stress how frustrating it is to go out there and cruise, and let it all go to waste,” Gray said.

Bryce Harper doubled and singled. He scored to give the Nationals their first lead at 3-2 in the sixth after Washington manager Dave Martinez challenged the ruling on the field that Harper was out at the plate on a bunt by Michael A. Taylor, a call that was overturned.

“From where I was he looked safe, he really did,” Martinez said. “I thought he slid under the tag and had his feet in and it worked out.”

Moises Sierra drove in two runs for Washington in his first big league start since 2014 with the White Sox. He played in place of outfielder Brian Goodwin was a late scratch with a sore left wrist, which has sidelined him since he left in the eighth inning of Wednesday’s 5-3 loss to the Braves.

Rockies 3B Nolan Arenado dropped his appeal and began serving a five-game suspension for his part in Wednesday’s brawl with the Padres. Outfielder Gerardo Parra, who is facing a four-game suspension for the same incident, was in the lineup and scored on Blackmon’s home run in the first after drawing a walk.

Nationals: 3B Anthony Rendon (toe) was out of the starting lineup for the first time this season. He left Friday’s game after fouling a ball off his left big toe in the fifth inning. “He’s sore, real sore,” Martinez said. “He’s probably going to be day-to-day. The X-rays are negative so that’s a good sign. He took a pretty big blow to his big toe so we’ll see how he feels.” ... Martinez said Goodwin became sore taking swings in the cage during warmups and will be reevaluated on Sunday.

Rockies: LHP Tyler Anderson (0-0, 5.65) had a season-high eight strikeouts in his last start against the Padres on April 10.