Rockies Trevor Story on U-turn: 'We knew we were better than this.' 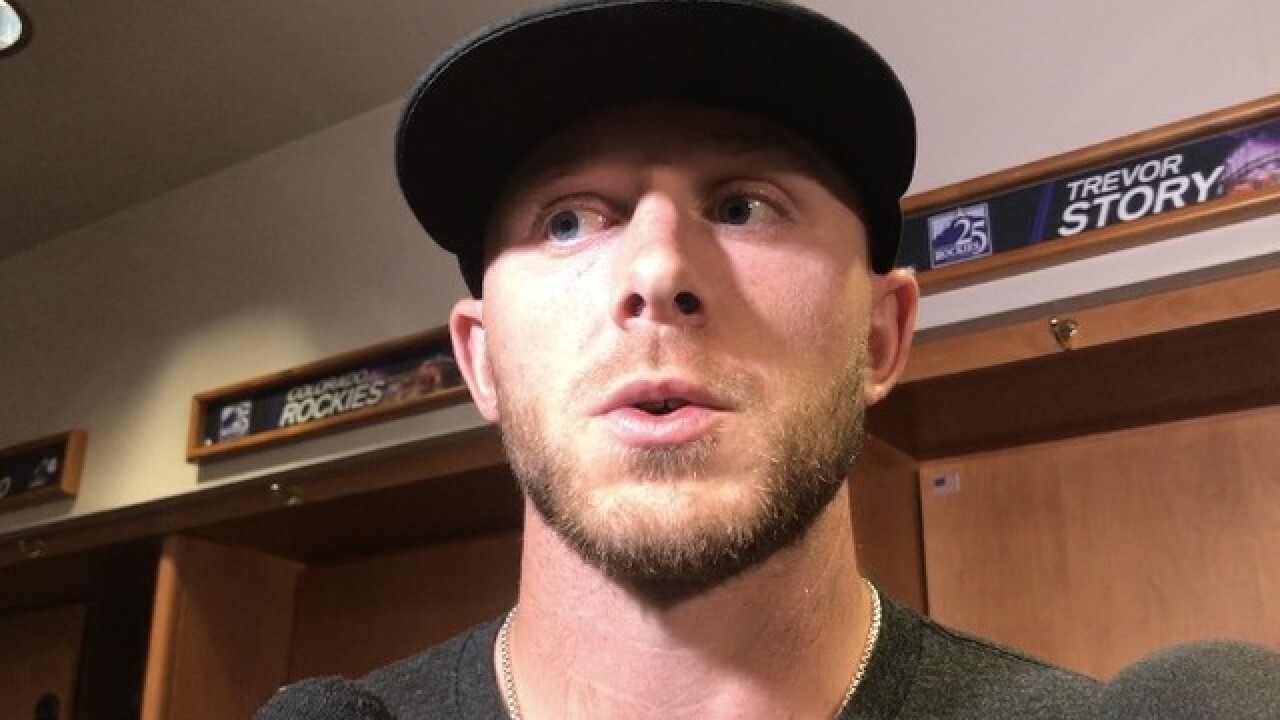 DENVER -- On June 27 in San Francisco, the Rockies reached a defining moment in their season. The plate umpire squeezed Adam Ottavino's strike zone as if it were Charmin. Colorado's lone functional reliever at the time suffered a rare misstep as the Rockies lost 1-0.

It represented everything wrong with the season, revealing fissures. When the Rockies pitched well, they did not hit, suffering from big-swing syndrome. And when they hit, finding a groove from mid May, their starting pitching began leaking oil while the bullpen poured drums of propane into the flammable situation.

Third baseman Nolan Arenado spoke up, wondering about his future. He loves Colorado, but wants to win. And this streak in late June offered a reminder that those things might remain mutually exclusive for uncomfortable stretches. The Rockies demoted opening day starter Jon Gray, a move several players told Denver7 they saw as a necessary message.

Gray slumped in his most recent Triple-A start and will make at least one more in the minors with Chad Bettis expected to rejoin the rotation before him. There was no way the Rockies could be taken seriously as a contender running out an ace-in-title only every five days. I hope Gray figures it out. However, the lab needs to be in New Mexico until he does.

The thing about losing for good teams goes back to the core: When does it become personal? For the Rockies, the watershed point arrived after the heart-in-a-blender loss to San Francisco. They have won eight of their last 10 games entering Tuesday's critical series with the division-leading Arizona Diamondbacks.

It was not a coincidence after spending time in the clubhouse before the game.

"I think you get to a certain point as a team and realize this is not the way we should be playing. And that’s way easier said than done. You wish you could just flip a switch and play good all the time," Rockies all-star shortstop Trevor Story told Denver7. "To a player we realized we are better than this, better than the way we are playing. ... and that’s kind of the way we are approaching the rest of the games.”

Arenado took no credit for the U-turn. But let's not be naive. When the biggest star makes his frustration known, it resonates. No names were necessary. No finger-pointing needed. If a team believes they are good -- and this team had every right to carry that opinion -- then prove it.

The Rockies have long handled success horribly. They have never gone to the playoffs in back-to-back years. Two of their most disappointing seasons were in 2008, cementing the idea, fairly or not, that 2007 was a fluke, and in 2010 when they lost 13 of their final 14 games to miss the dance.

This latest reversal started on the mound. Pitch and play defense, and it makes the game less complicated. Look around the big leagues. Radar guns continue exploding. Offenses are not equipped to score six, seven runs a night. As the Rockies rebounded, it traced to eight consecutive starts of allowing two runs or less. Kyle Freeland continued to show why he's the ace of the staff. How do I know? He can win without his best stuff and possesses an insatiable desire to improve.

"It's a game of adjustments. You can never rest," Freeland told me Tuesday before batting practice.

Freeland tamed Seattle over the weekend by relying on his changeup. He didn't even throw one until pro ball. A couple of starts into the season, he altered the grip. No need to go into great detail, but moving the placement of his thumb under the ball has created better movement and conviction in the pitch.

That's central to winning big league games. Maximizing nuances. Tyler Anderson, Tuesday's starter, is a thinking-man's pitcher. He refuses to compromise, stubbornness that has been rewarded this month. Freeland continues to tweak, looking for ways to remove a tick of velocity to make the pitch even more effective.

Therein lies an explanation. Baseball players are solo performers in a concert. But while individuals can win games, teams win championships. This club receives fair criticism for its clunky home showings. However, there is a mental toughness present. As the season began to unravel -- believe me, I have watched the pull of one thread ruin an entire Rockies' year -- the players tied a knot and hung on. They climbed back into the race. They have a chance to make this another intriguing summer and fall.

The National League West remains wide open. The Rockies decided against fading. Now comes the hard part: the rest of the season. Colorado faces a tremendous challenge. The Rockies, by my math, need to win 29 more home games -- going 29-12. Reach 47 victories at Coors Field coupled with 42 road wins, and the playoffs become realistic.

They have shown resolve. Enough was enough. Now the question lingers: Do they have enough left?

"You know what happened is what we were supposed to be doing every day. We picked each other up even when things were getting a little ugly. We always communicate," outfielder Carlos Gonzalez said. "We talked to each other and said, 'Hey listen this is the perfect time for us to turn things around. This is the time for for us to move on, gain ground and make things interesting. We believe we can do it."