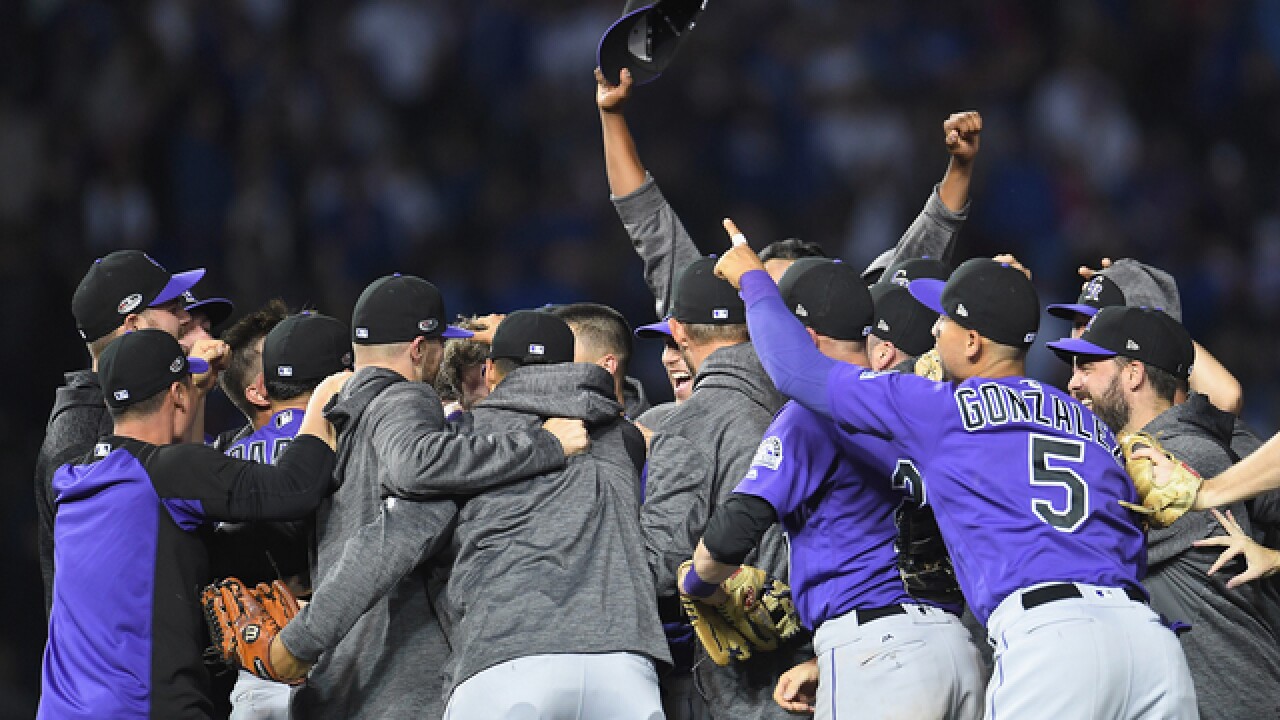 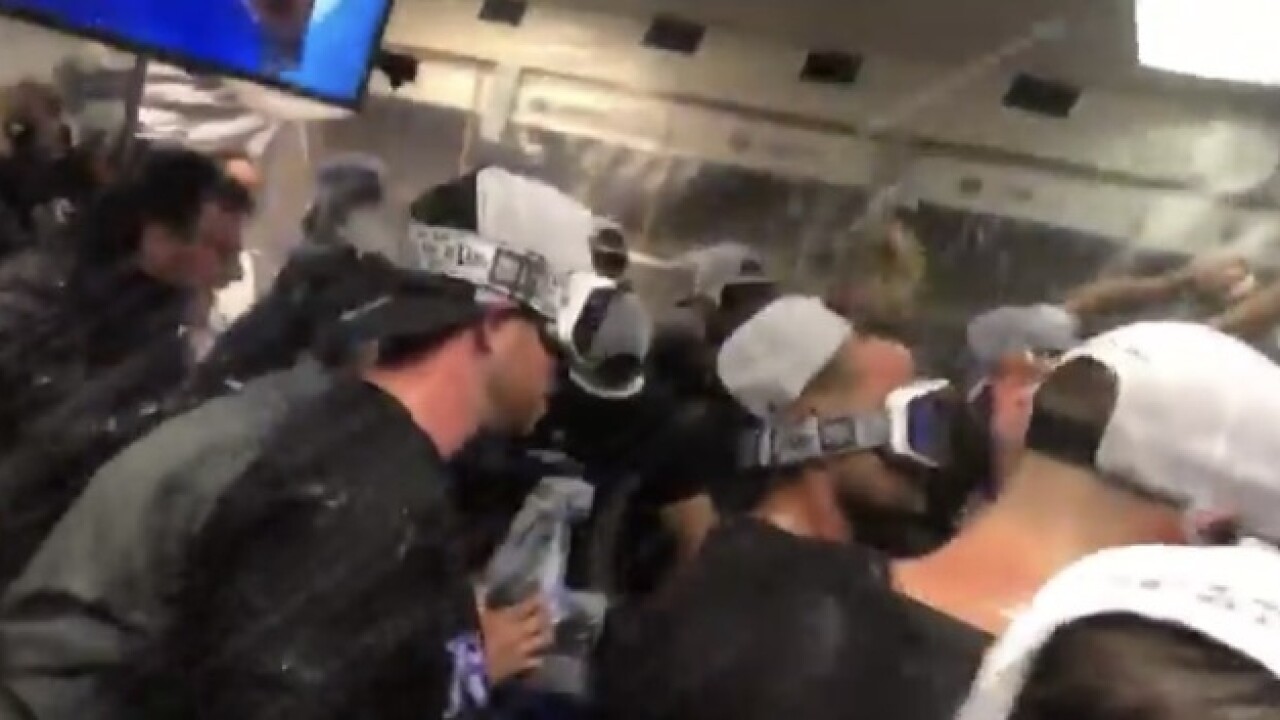 DENVER — The clubhouse was thinning, the music dimming as the players began to file out for batting practice last Saturday. There was no talk of champagne, but rather deja vu.

I stood with outfielder Matt Holliday and revisited his role in the franchise's defining moment. Remember that time you slid into home plate, and scored that walkoff run? Holliday grinned. I have known him since long before his first big league game. He knew where I was going.

"It is kind of crazy being in this clubhouse and being here in 2007. It's pretty exciting to be involved in a pennant race here," Holliday said. "It was going to take an opportunity like this with this team to play this year. It's been worth it to get back out here. I have really enjoyed it."

Unspoken was the idea that he wanted to be part of something special again. There will never be another 2007 -- so much pixie dust was sprinkled that fall I helped pen a book on the "Magical Season" for The Denver Post.

Since, there has been suffering. Two playoff berths featuring quick exits. Last season the Rockies staggered home after a clumsy loss at Arizona. The sting left a welt, a reminder of what could have been, the anxiety growing as the window started closing on the core group of stars.

The ache vanished on Tuesday night. Scott Oberg delivered a strikeout, and gloves flew in the air and grown men ran around like kids on the playground. The Cubs are dead. Gone. Vanquished.

The Rockies, who are treated as afterthoughts as the lone team in their time zone, moved on to the division series against the Milwaukee Brewers. They have five games to win three starting on Thursday, and can take a bus to Miller Park from Chicago. That is welcomed after three games in three days in Denver, Los Angeles and Chicago. Regardless of how the next round plays out, these Rockies earned a place in Colorado sports lore.

You know what? They were buried multiple times this summer, including by me after the Cardinals and Brewers walked them off three times in five days. They invested $106 million in their bullpen and only one of those arms -- Wade Davis, who had Prestone running through his veins Tuesday -- is a viable contributor. They lost shortstop Trevor Story for a critical stretch last month. And yet, they couldn't take a hint. This team is harder to kill than a cockroach. Or Chuck Norris.

Tuesday's victory featured Kyle Freeland, Mr. 303, showing the world why he should be third on every Cy Young ballot. It featured a bullpen with an iron stomach, and a reserve catcher producing the greatest swing of his life. Tony Wolters, who hadn't posted a hit since Sept. 10 and owned a .170 batting average, knocked a changeup into center field to score the go-ahead run. Because, you know, it's the playoffs where Brian Doyle and Francisco Cabrera become famous.

Anyone within ear's reach knows I have questioned why Wolters is on the roster. He frames pitches well, but has committed four errors with six passed balls in 64 games. He inexplicably got his signals crossed with German Marquez on Monday in Los Angeles, opening up a big inning that required four outs in the loss to the Dodgers. That said, he delivered with the alarms blaring Tuesday, staying patient in an at-bat when few hitters could resist the temptation to swing early and often.

Players love him in the clubhouse, which means nothing to outsiders, but matters to the chemistry of the team.

That he strode onto the stage was a credit to Freeland and crew. Freeland produced a most impressive postseason debut, holding the Cubs scoreless over 6 2/3 innings on four hits and six strikeouts. Sometimes it's easier to appreciate a player than explain him. Freeland is an ace. That's what it looks like. He would rather eat tacks than give in to hitters or the umpire.

Pitching on short rest for the first time in his pro career, Freeland went past the exit for respectability and stopped at history. According to STATS, Inc., Freeland became the second left-hander since 2000 to record 20 outs without allowing a run, joining Madison Bumgarner in 2014 and 2016.

Of course, it's the Rockies so nothing comes easily. Adam Ottavino entered in the seventh and doused flames, but couldn't escape the eighth unscathed. He raced to two strikes on Cubs star Javy Baez, and inexplicably left a slider over the plate that he crushed to left to tie the game at 1-all.

Prior to that pitch, hitters were 0-36 with 31 strikeouts on 0-2 counts against him this season. Again, the playoffs embrace aberrations. Baez's single transformed the next few hours into a series of Pepto shots and nervous breakdowns.

Manager Bud Black made a double switch, losing Charlie Blackmon's bat in the lineup to keep David Dahl in the game and shove Carlos Gonzalez into right field for defense. Nolan Arenado found himself hugging Baez on a potential double play lost a few innings later. Chris Rusin, with an ERA north of 6.00, was needed.

Playoff games require imagination and consternation. They are not perfect. They come down to three or four moments defining a team's season, if not legacy. The Rockies have long suffered insults -- plenty deserved -- for their lack of success and altitude address.

That will never change. Colorado exists in the witness protection program. But on this night, with voices hoarse and goggles protecting their eyes, the Rockies advanced. The heck with critics -- me included. In a time when Instragram, Facebook and Twitter provide validation, the Rockies found it 1,000 miles from home in the longest postseason winner-take-all game in major league history.

The Rockies are playing in Milwaukee on Thursday. Let that sink in. Just like the champagne in the carpet in the visiting clubhouse at Wrigley Field.