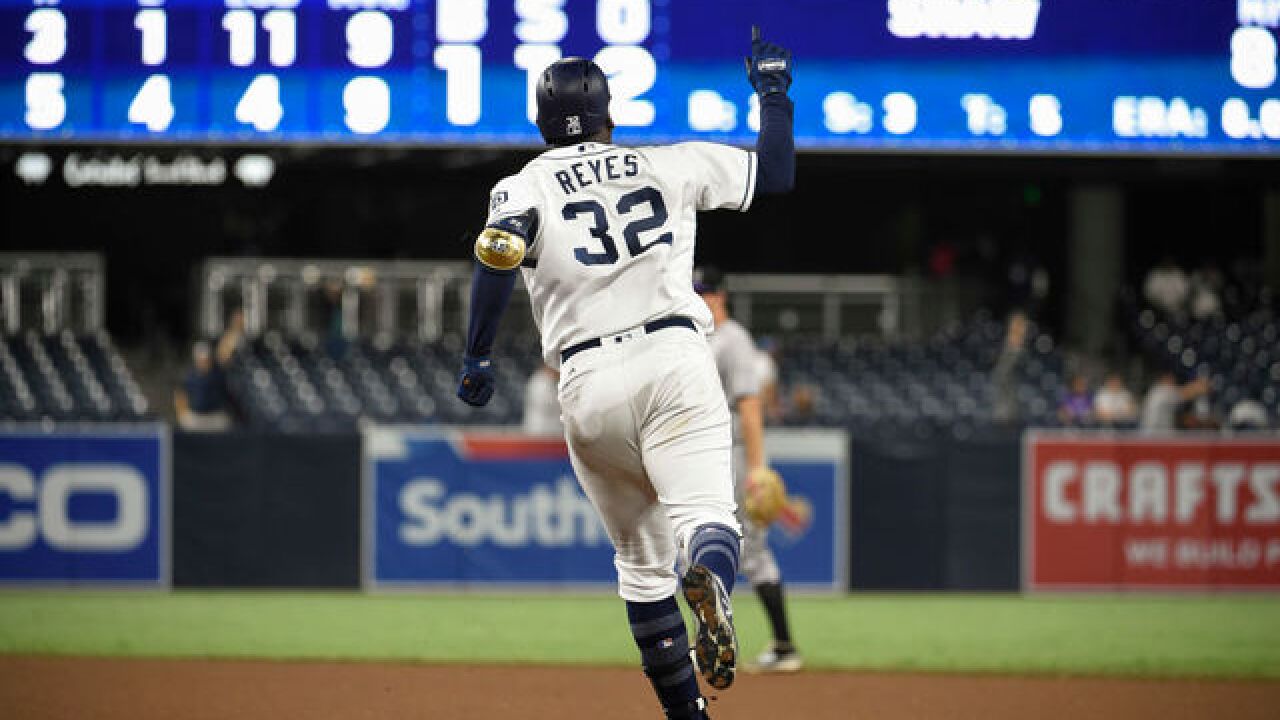 2018 Getty Images
Denis Poroy
<p>SAN DIEGO, CA - AUGUST 30: Franmil Reyes #32 of the San Diego Padres celebrates as he rounds the bases after hitting a walk off home run during the 13th inning of a baseball game against the Colorado Rockies at PETCO Park on August 30, 2018 in San Diego, California. (Photo by Denis Poroy/Getty Images)</p>

Reyes sure did, and in a big way. The rookie hit his first career walkoff homer with two outs in the 13th inning to give the Padres a 3-2 victory over the Colorado Rockies.

Reyes connected to left-center on a 1-1 pitch from Bryan Shaw (4-6) for his 12th homer. It was only the sixth hit for San Diego. The Rockies had only three hits against seven Padres pitchers.

"I actually told him before the game that he was going to get the game-winning hit. I probably say that to a lot of bench guys," Green said. "It doesn't always happen like that. He said we were going to score 10 runs. I was right, he was wrong. But a great at-bat. The way that ball was hit I didn't think it was going out but he had enough to get it out to a big part of the park late at night. It was a great swing."

Reyes, who entered as a defensive substitution in the 11th, said it felt "very, very good. Really excited. I really wasn't looking for a pitch. I was picking and choosing my zone. I focused on one little zone. If he throws it there, it was the damage I was looking for. The pitch I homered on, it was just hanging. I see it really clear."

The Padres had two other chances to win it before Reyes finally did. They had runners on first and second with no outs in the 11th and failed to score. Rookie Luis Urias, who went 3 for 5 against Seattle on Wednesday in just his second big league game, popped up a bunt, and Wil Myers grounded into a double play.

They had runners on first and second with one out in the ninth before Hunter Renfroe grounded into a double play.

Myers committed three errors at third base and struck out three times. The Padres had 16 strikeouts.

"It's a great feeling for us to take games away from these playoff contenders because to us it feels like big, important games because we know for them it's big, important games," said Stock, a 28-year-old rookie. "It's extra sweet against a team that's in our division."

Rockies starter German Marquez struck out a career-high 13 in eight innings while allowing two runs and two hits, with one walk.

"I just wanted to keep the game close," Marquez said. "Close enough that we had a chance to win, and I was feeling good and I was going for it."

Colorado trails Arizona by 1 1/2 games in the NL West after the Diamondbacks beat the Dodgers 3-1 on Thursday night. Los Angeles is two games behind Arizona.

"It was just a bad night," Rockies manager Bud Black said. "That's what you chalk it up to. ... It just wasn't a good night offensively, for both teams. We shut them down, they shut us down, there were pitches being made. We just didn't have the big hit at the right time. We threatened a couple times, but we couldn't get the hit."

Rookie lefty Eric Lauer, who came off the disabled list to make the start, held the Rockies hitless on 81 pitches through five innings before manager Andy Green turned it over to another rookie, Trey Wingenter, with the Padres leading 2-1.

Wingenter walked Trevor Story opening the sixth and then allowed a single to right by Matt Holliday. He struck out Carlos Gonzalez before Story scored on a fielder's choice by Ian Desmond to tie the game at 2.

The Padres remain the only team in the majors without a no-hitter.

Lauer, who had been on the DL with a strained left forearm, struck out two and walked two.

The Padres took a 2-0 lead in the second when Austin Hedges hit his first career triple to bring in Renfroe and then scored on Freddy Galvis' sacrifice fly.

The Rockies got an unearned run back in an ugly fourth inning for the Padres, when Lauer hit Story with a pitch and then walked Holliday with one out, followed by consecutive two-out errors by Myers, who recently was moved from the outfield to third base. Myers' first error allowed Story to score, and his second error loaded the bases before Lauer struck out Marquez to end the inning.