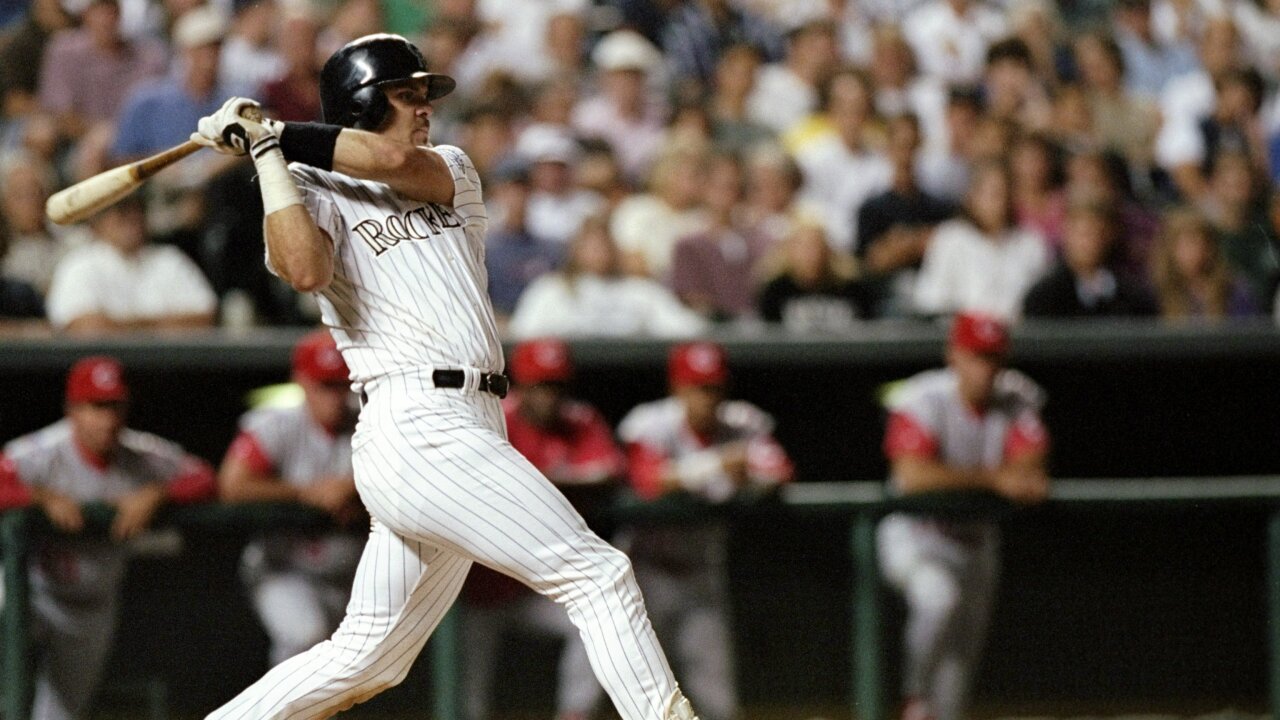 Copyright 2020 by Getty Images
Brian Bahr/Getty Images
25 Aug 1997: Outfielder Larry Walker of the Colorado Rockies swings at the ball during a game against the Cincinnati Reds at Coors Field in Denver, Colorado. The Reds won the game 7-6.

DENVER — Larry Walker turned games into a series of wows! On Tuesday, he made the pro Baseball Hall of Fame, providing the final exclamation point to a storied career.

He was elected on his 10th and final attempt because voters favored quality over quantity. The three-time batting champion made unprecedented 20-percent jumps on the ballot in each of his last two years of eligibility. He finished with 76.6 percent, with 75 percent required. Joining Walker in this year's class is Yankees shortstop Derek Jeter, who received 99.7% of the vote in his first year of eligibility.

"Justice served," Walker tweeted, and later deleted, after the announcement. Earlier in the day, Walker predicted he would not make it, but thanked everyone for their support. But he joked about being inducted with Jeter in an interview.

“As great as Derek is, I’m kind of going to be like that – you remember those old 45s we used to listen to, they had the song on the A-side. And the song on the B-side, you didn’t really know about? I’m the B-side,” Walker told MLB Network in an interview.

“I know I speak for the whole Rocky Mountain Region in congratulating Larry for his election into the Hall of Fame,” said Rockies Owner/Chairman & CEO Dick Monfort in a statement. “Larry blessed our region for parts of 10 seasons and we feel extremely fortunate to be a part of his incredible career. Congrats, Larry.”

Fellow Rockies great Todd Helton finished with 29.2% of the vote in his second year of eligibility.

In the end, the Rockies will be represented in Cooperstown for the first time ever. The argument for Walker is easy when looking at individual stats over volume. Walker was a five-time All-Star, a seven-time Gold Glove winner over 17 seasons with the Montreal Expos, Rockies, where he played from 1995-2003, and Cardinals.

Walker hit .313 with a .400 on-base percentage, and 383 home runs. He received National League MVP votes in eight seasons, and became the only Colorado player to win the award in 1997. That remains the best season I have ever covered. Walker batted .366 with 49 home runs, 130 RBIs, a .452 OBP and 33 stolen bases. He also served as a stop sign for base runners with a breathtaking right arm, while featuring more range than a Clint Eastwood western.

I have covered great players from Todd Helton and Troy Tulowitzki to Nolan Arenado and Matt Holliday. None had Walker's skillset. He was a one of the last five-tool players. Few have blended his power with the ability to handle the bat and make contact. And I have never seen a better base runner. He knew exactly what gear to shift into to ensure he would get a double or triple.

The eye test was never the issue with Walker when talking about the Hall of Fame. It was the stats. He overcame the Coors Field bias – he was a career .381 hitter at Coors Field compared to .282 in all other ballparks – and durability questions. He was long short on votes because his lifetime totals didn’t match up as a result of playing more than 143 games once. While his Wins Against Replacement number screams he was a Hall of Famer, he now has the fewest hits and games played for any right fielder in Cooperstown.

Those are ultimately just numbers. What matters now is Walker received the sport’s highest honor, meaning a Rockies player is finally heading to the Hall of Fame.