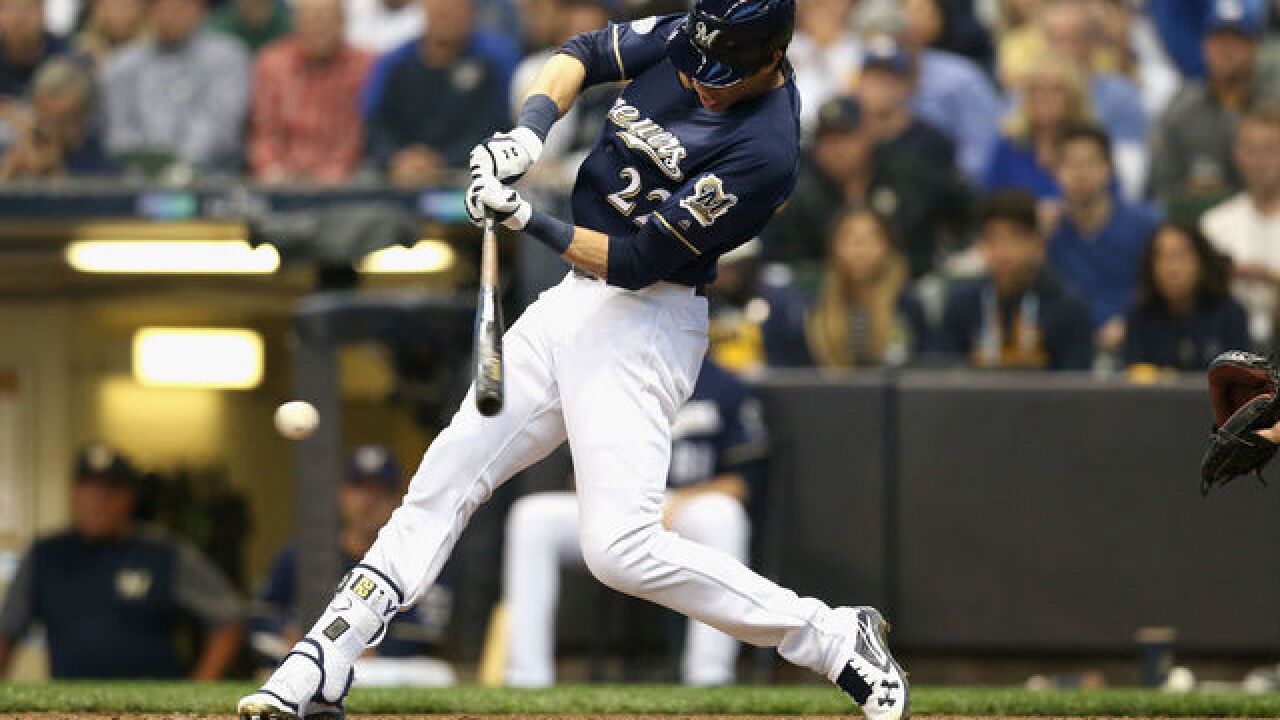 2018 Getty Images
Dylan Buell
<p>MILWAUKEE, WI - OCTOBER 04: Christian Yelich #22 of the Milwaukee Brewers hits a single during the sixth inning of Game One of the National League Division Series against the Colorado Rockies at Miller Park on October 4, 2018 in Milwaukee, Wisconsin. (Photo by Dylan Buell/Getty Images)</p>

MILWAUKEE – After struggling to get any semblance of offense going for much of Game 1 of the National League Division Series against the Brewers, the Rockies’ bats came to life in the top of the 9th inning to tie the game, but the Brewers rallied to win 3-2 in extra innings.

The Rockies eked out a 2-1 win over Chicago in extra innings Tuesday to advance to the series against Milwaukee, and they had to play extras again Thursday, though the outcome wasn’t the same.

Colorado again struggled to get their bats going Thursday to open the series, managing just one hit – a Carlos Gonzales triple – through eight innings.

But three Rockies singles and a Nolan Arenado sacrifice fly in the top of the 9th tied the game back up, and Rockies setup man Adam Ottavino threw a scoreless bottom half of the inning to send the game to extras.

But after Brewers outfielder Christian Yelich again reached based in the bottom of the 10th -- his fourth time of the game -- he eventually was singled home by Mike Moustakas to give the Brewers a 3-2 win.

The Brewers trotted out a committee of relievers to open the series. Brandon Woodruff threw three scoreless innings to open the game and he and five other Milwaukee pitchers struck out 12 Rockies hitters, who were playing their fourth game in their fourth city in five days.

Yelich, who is likely to win the NL MVP award after falling just shy of the Triple Crown this season, continued his hot streak with a 413-foot, two-run home run to center field in the 3rd inning that followed a full-count walk to Lorenzo Cain.

Aside from Yelich, the Brewers largely struggled offensively as well for much of the game. Over the first seven innings, the Brewers scattered just four other hits aside from his home run—all singles.

Chad Rusin came in to start the sixth inning and pitched into the seventh, allowing one hit, striking out one and walking one. D.J. Johnson got two strikeouts to end the inning.

Rockies reliever Harrison Musgrave walked Yelich to start the 8th, and Yelich stole second base uncontested. Ryan Braun singled off Arenado’s glove to move Yelich to third to put runners on the corners with no outs in the bottom of the 8th.

Musgrave struck out two Milwaukee hitters then intentionally walked Mike Moustakas before he was relieved by Scott Oberg, who got Manny Pina to ground into a fielder’s choice to shortstop to end the inning without any further damage.

Pinch-hitter Gerardo Parra singled off Brewers closer Jeremy Jeffress to start the 9th inning, and Matt Holliday, who was pinch-hitting as well, followed with another single.

Charlie Blackmon missed a ground-rule double to deep right field by about an inch which would have scored Parra, but it was ruled foul on review. Still, he came through with a single through the right side later in the at-bat to score Parra and narrow the Brewers’ lead to 2-1.

D.J. LeMahieu bounced a slow ground ball to shortstop, but the Brewers’ Orlando Arcia missed the ball when he went to scoop it up, and the Rockies loaded the bases to bring up Arenado with no outs.

After falling behind in the count 0-2, Arenado lifted a fly ball deep enough to center field to score pinch-runner Garrett Hampson and tie the game at 2 apiece. David Dahl hit a grounder to Brewers first baseman Travis Shaw, who threw home to nab Blackmon in a rundown before he was tagged out. Trevor Story struck out to leave two runners stranded and send the game to the bottom of the 9th.

The Rockies’ Adam Ottavino threw an 11-pitch ninth to send the team’s second consecutive game to extra innings. Parra hit a shot to the warning track in the top of the 10th, but it was about 10 feet too short.

Ottavino walked Yelich to start off the bottom of the 10th, and a wild pitch put him on second base with no outs. Braun struck out swinging and Shaw was intentionally walked. Curtis Granderson grounded into a fielder’s choice to shortstop, and Yelich held up at third.

But Moustakas lined a two-strike single to right to score Yelich and send the Brewers to a 3-2 win.

Tyler Anderson takes the mound for the Rockies Friday against Jhoulys Chacin for the Brewers. The game will be broadcast on FS1. First pitch is scheduled for 2:15 p.m. MT.