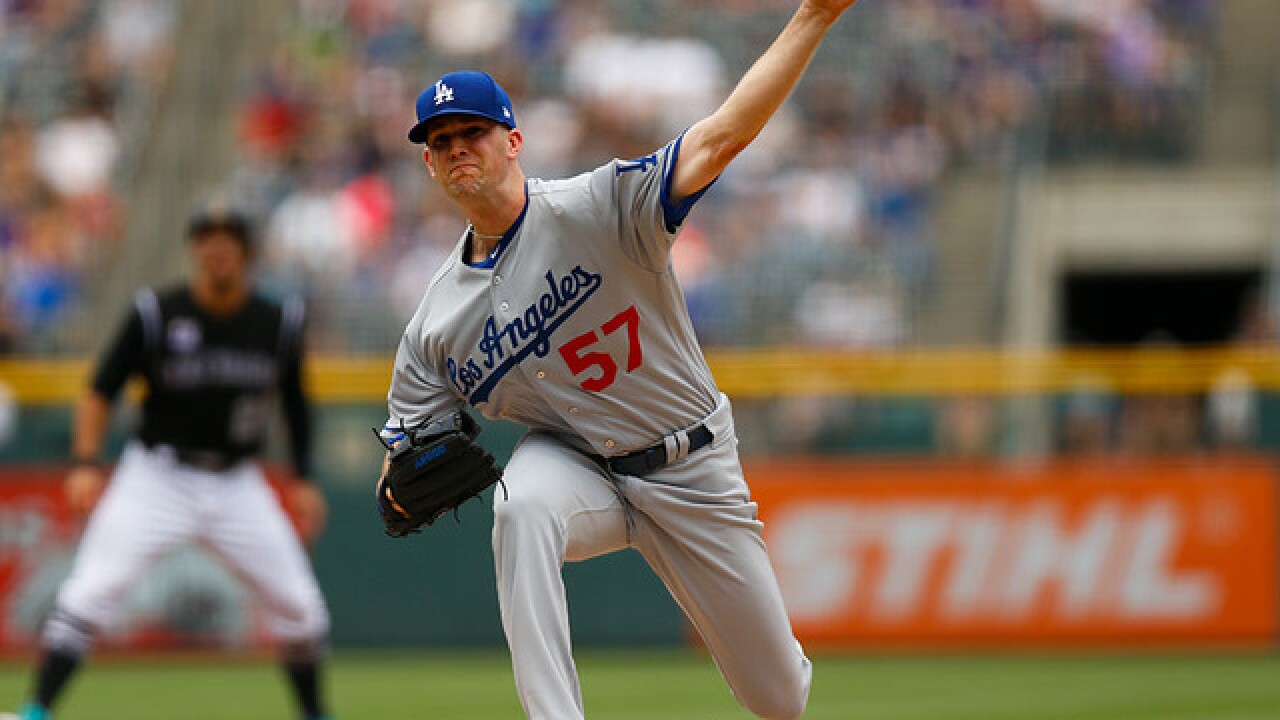 Copyright 2018 Scripps Media, Inc. All rights reserved. This material may not be published, broadcast, rewritten, or redistributed.
Justin Edmonds
<p>DENVER, CO - JUNE 3: Starting pitcher Alex Wood #57 of the Los Angeles Dodgers delivers to home plate during the first inning as Nolan Arenado #28 of the Colorado Rockies leads off second base at Coors Field on June 3, 2018 in Denver, Colorado. (Photo by Justin Edmonds/Getty Images)</p>

DENVER (AP) — Joc Pederson has been in a long-ball dry spell.

There’s nothing like Coors Field — with the baseball carrying — to remedy that.

“I just haven’t really been driving the ball in the air,” said Pederson, who homered for the first time since April 21. “I’ve missed some pitches this year — a lot of them. It was nice to connect on a few.”

Kemp kept up his torrid hitting against Colorado by lining a cutter from reliever Bryan Shaw (2-4) for a two-run homer to break open a tight game. Kemp leads all active players with 44 homers against the Rockies. Of those, 21 have come at Coors Field.

“This is one of those ball parks where you see the ball good,” Kemp said.

On this evening, most of the Dodgers were seeing the ball extremely well.

Tied at 4 going into the seventh, the Dodgers erupted in a long inning that featured six hits, three walks, three pitching changes and 12 batters. The sellout crowd simultaneously cheered and booed thanks to a large contingent of L.A. fans.

This was the second time the Rockies have allowed eight or more runs in an inning this season. They surrendered nine in the seventh against San Diego on April 23.

“We’ve just got to keep fighting through this. Obviously, there’s a few guys going through a tough time,” said Rockies manager Bud Black, whose team dropped to 1-4 against Los Angeles this season. “This is a time when you have to really cinch your belt a little bit if you’re some of our guys in our ’pen.”

Just like that, the Dodgers are right back in the thick of the NL West race after falling behind by nine games on May 8.

“We’ve made up for a month and a half of not so good baseball. We have a long way to go,” Kemp said. “We’re pretty excited where we’re at and how we’re playing.”

Dodgers: RHP Kenta Maeda (hip) was slated to play catch Saturday. ... The Dodgers are working toward getting LHP Rich Hill (blister) to the point where he can go 75 pitches and five innings in a simulated game. ... Manager Dave Roberts said LHP Julio Urias (elbow surgery rehab) could be pitching in games by the end of July. ... LHP Hyun-Jin Ryu (strained groin) was transferred to the 60-day disabled list Saturday.

Kemp threw out Charlie Blackmon at the plate in the first inning when Blackmon tried to tag up on a fly to left.

“I still got a little juice in the tank,” Kemp said.

The starters on Saturday were the same as when the Rockies beat the Dodgers 2-1 on May 21 in Los Angeles. Only this time, Dodgers right-hander Walker Buehler and Rockies righty German Marquez weren’t nearly as sharp.

Buehler’s undoing was the second inning, when the rookie allowed more runs (4) than he did in his last two starts combined (2). He grinded through five innings.

He did set the Dodgers down in order in the first. That’s significant because entering the game 14 of the 30 runs Marquez has allowed this season have come in the opening frame.

“His stuff was good. He held his velocity throughout the game,” Black said.

Dodgers infielder Breyvic Valera had three RBIs — the first three of his big-league career. ... Reliever Pedro Baez (2-3) earned the win. ... Trevor Story had three hits and DJ LeMahieu added a two-run double for the Rockies. ... Pederson turned in his fifth multihomer game and first since Sept. 10, 2016 at Miami. He also doubled and singled to tie a career high with four hits.