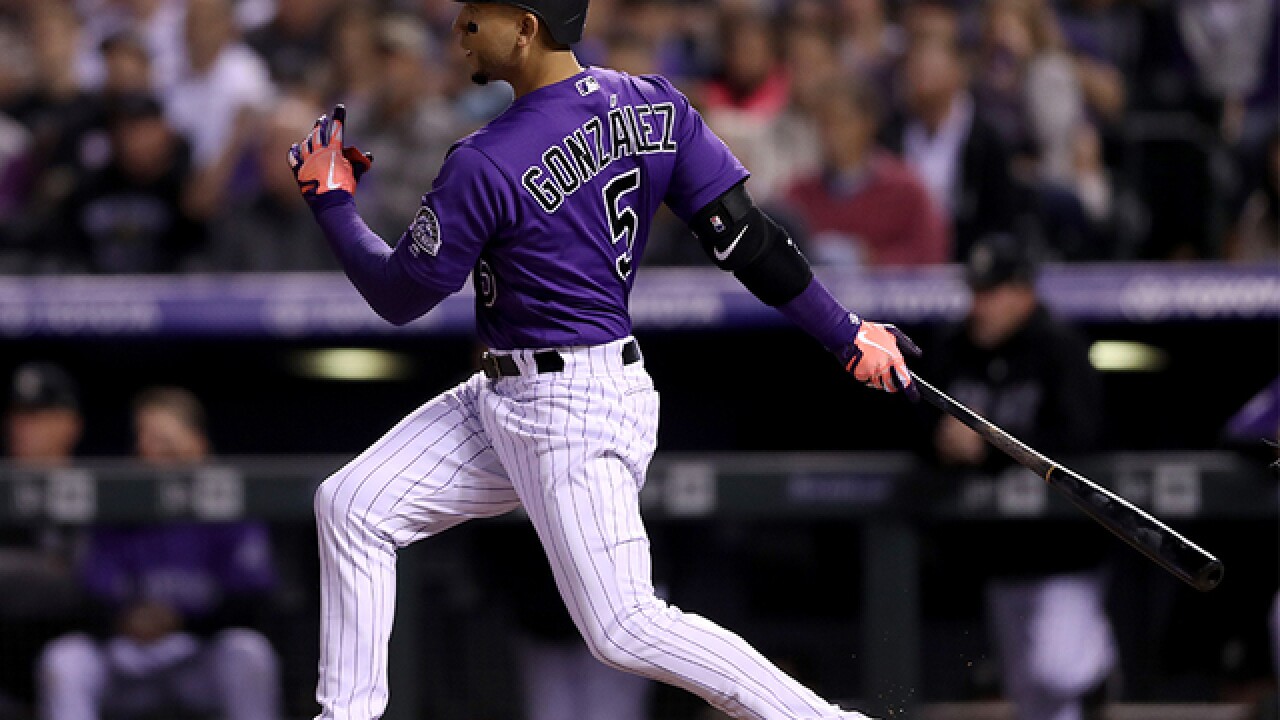 Copyright 2018 Scripps Media, Inc. All rights reserved. This material may not be published, broadcast, rewritten, or redistributed.
Matthew Stockman
<p>DENVER, CO - SEPTEMBER 26: Carlos Gonzalez #5 of the Colorado Rockies hits a RBI single in the fourth inning against the Philadelphia Phillies at Coors Field on September 26, 2018 in Denver, Colorado. (Photo by Matthew Stockman/Getty Images)</p>

Colorado outscored the Phillies by 34-4 over the first three games of the four-game series. David Dahl homered for the third straight game, and the Rockies went deep four times in all as they extending their winning streak to six.

Colorado opened a 1½-game advantage over St. Louis for the last NL playoff berth and also remains in contention to win its first NL West title. The Rockies trailed the first-place Los Angeles Dodgers by a half-game entering the night.

Marquez (14-10) allowed three hits in seven innings and struck out 11 to set a Rockies record with 221 for the season, seven more than Ubaldo Jimenez’s total in 2010.

Phillies pitcher Nick Pivetta finally broke the string with a grounder that Marquez fielded only to throw wildly to first for an error. Roman Quinn got Philadelphia’s first hit in the fourth.

Colorado open the game with a seven-run fifth that included Dahl’s three-run homer, a two-run shot from Story and another two-run homer by Ian Desmond. All seven runs were scored with two outs.

Colorado’s Carlos Gonzalez had two hits and drove in two runs. He’s hitting .363 in his career against the Phillies.

Gonzalez also chipped in with a play in the field. With two outs in the fourth and Quinn on first, Dylan Cozens delivered a single to right that Gonzalez quickly relayed to Story, who twirled and threw out Quinn at the plate.

Phillies: INF J.P. Crawford is dealing with a right shoulder impingement. ... C Wilson Ramos was out of the lineup with a sore wrist. ... RHP Zach Eflin has a strained left oblique.