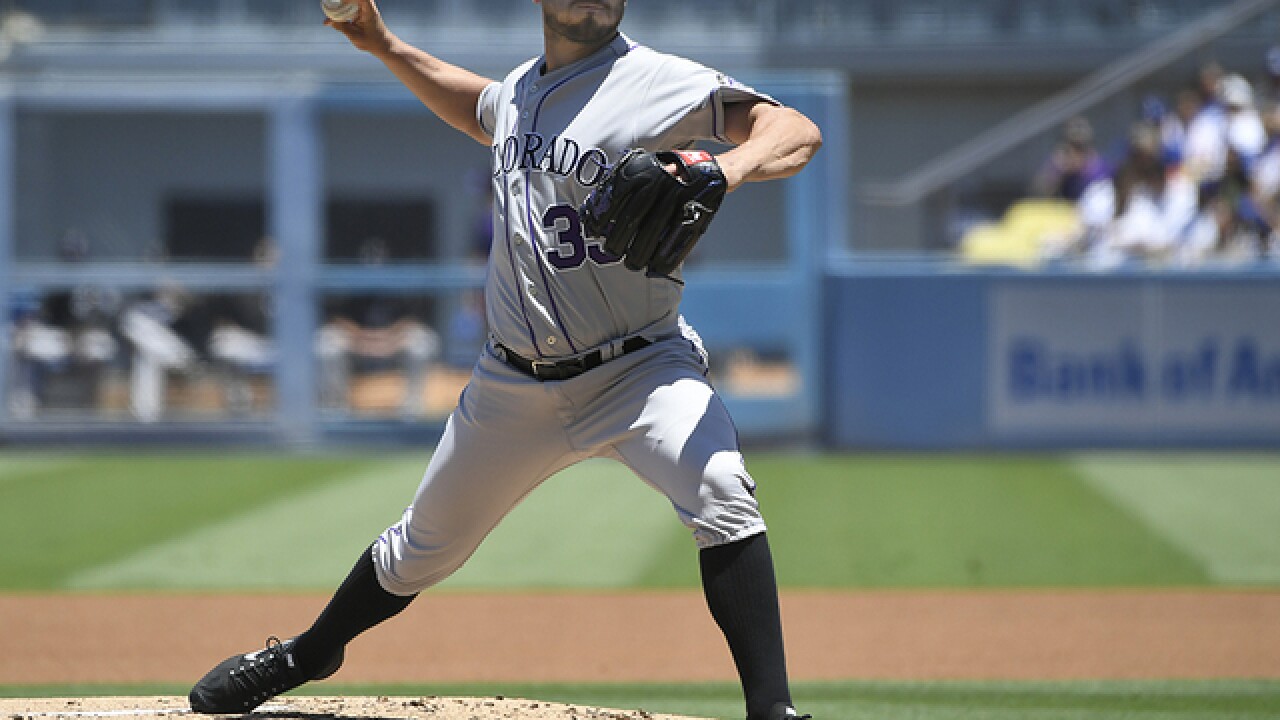 Copyright 2018 Scripps Media, Inc. All rights reserved. This material may not be published, broadcast, rewritten, or redistributed.
John McCoy
<p>LOS ANGELES, CA - JULY 01: Chad Bettis #35 of the Colorado Rockies pitches in the first inning against the Los Angeles Dodgers at Dodger Stadium on July 1, 2018 in Los Angeles, California. (Photo by John McCoy/Getty Images)</p>

LOS ANGELES (AP) — A fist pump and a late fastball on the cusp of 100 mph was all the indication needed to know just how good German Marquez felt Saturday.

He pitched two-hit ball over eight innings and Ian Desmond homered as the Colorado Rockies beat the Los Angeles Dodgers 3-1.

Marquez (6-8) retired his first 15 batters before Enrique Hernandez connected for a home run off the left-field foul pole leading off the sixth. After a Chase Utley single, Marquez dispatched the Dodgers on three fly balls to end the inning and pumped his right fist to emphasize the moment.

“Isn’t that great? I loved that” Rockies manager Bud Black said of the fist pump. “He uses (his energy) with his fastball. I want him to use it with his fastball but not overthrow. There is a time you can stand on a pitch and lean on it and I think he does that.”

He appeared to do just that with his fastball in the eighth inning. Facing Hernandez two innings after the home run, Marquez struck out the Dodgers’ utility man on a 99.9 mph fastball.

“No doubt I let it rip on that one,” Marquez said through an interpreter. “But I worked hard in my preparation in between starts and my goal is to maintain my stamina deep into games. I think today I was able to accomplish that.”

Marquez struck out nine and walked none after entering with a 5.53 ERA, third-worst among qualified National League starters.

The Rockies closed out June with three consecutive victories and two consecutive over the Dodgers after getting swept by Los Angeles in a three-game series at Coors Field to begin the month. Colorado finished June with an 11-16 record.

Dodgers starter Kenta Maeda (5-5) gave up three runs, two earned, on five hits over seven innings and lost for the first time in four June starts. He had a short stint on the disabled list during the month due to a right hip strain. He struck out nine for the second consecutive start.

“It was a good outing,” Maeda said through an interpreter. “My desire is to be able to pitch deeper into the game and being able to pitch seven innings and is a good thing. But unfortunately, we didn’t get the win and that was something we wanted.”

The Rockies took a 1-0 lead in the fourth when DJ LeMahieu scored from third base on a passed ball by catcher Yasmani Grandal. Nolan Arenado struck out, but advanced to first with LeMahieu scoring when the ball got through Grandal.

Desmond went deep in the fifth for a 2-0 lead. It was his 17th home run of the season and career-best 13th on the road.

Trevor Story doubled for the Rockies in the seventh and scored on Chris Iannetta’s single to make it 3-1.

After a strong start to the month, the Dodgers finished June with a 17-9 record, losing four of their last five games.

CLOSER FOR THE DAY

Rockies reliever Adam Ottavino pitched the ninth Saturday for his second save. Closer Wade Davis, who earned the save after Tyler Anderson’s eight-inning outing Friday, was given the night off.

“He pitched great and he deserved to win,” Ottavino said of Marquez. “That’s two games straight that we got eight innings out of our starters so we appreciate that down in the bullpen. I think everybody does on the team so I think that was just an awesome job by (Marquez).”

Davis is expected to return to the closer role Sunday.

Hernandez’s home run gave the Dodgers 55 in the month of June, to increase their franchise record for a month. The previous record of 53 was set in June of last season.

His home run was his 14th of the season and third this week. Max Muncy and Joc Pederson each finished with 10 home runs in June. Pederson has 11 on the season.

“I worked really hard in the off season to get stronger and get in better shape,” said Hernandez, whose previous best was 11 home runs last season. “Last year I hit a lot of doubles and this year those doubles are turning into homers. Hopefully we can keep swinging the bats in July the way we are in June.”

Rockies: OF David Dahl (broken right foot) is out of a walking boot and will join the team Monday in Colorado to continue his rehab.

Dodgers: RHP Walker Buehler (right rib microfracture), who made one appearance this week after returning from the DL, will likely need two starts at Class A Rancho Cucamonga before he returns to the Dodgers, according to manager Dave Roberts. ... RHP Pedro Baez (right biceps tendinitis) threw a 30-pitch bullpen session, but no timetable for his return has been revealed.

Rockies right-hander Chad Bettis (5-1, 5.07 ERA) will be back on the road where he excels, as his five road victories were tied for third in the National League at the start of play Saturday. Dodgers right-hander Ross Stripling (6-2, 1.98) has a loss and a no-decision in his past two starts following a six-start win streak.