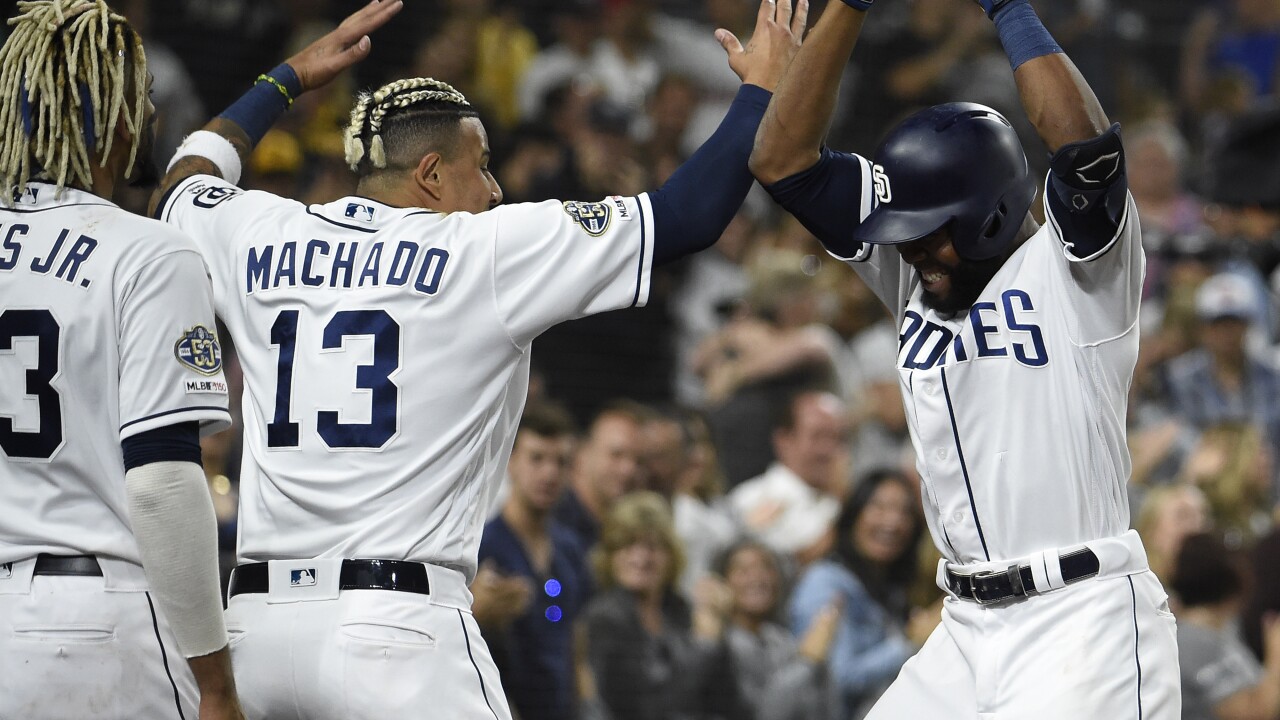 SAN DIEGO (AP) — Manuel Margot hit a go-ahead, two-run homer in the eighth inning and Hunter Renfroe had a homer among his three hits and scored four runs as the San Diego Padres beat the staggering Colorado Rockies 8-5 Saturday night.

Wil Myers added a pinch-hit homer in the eighth and rookie Fernando Tatis Jr. hit a triple to extend his hitting streak to a career-best 14 games for the Padres, who have won the first three games of this four-game series and four of five overall.

Margot's 10th homer came an inning after Yonder Alonso hit a tying, two-run pinch-hit homer for the Rockies, who have lost five straight and 19 of their last 25 to drop a season-worst 13 games under .500.

Renfroe drew a leadoff walk in the eighth off Jairo Diaz (4-3) and Margot then homered. Myers homered with two outs off Jake McGee, his 14th.

Andres Muñoz (1-1) pitched the eighth for the win and All-Star Kirby Yates worked the ninth for his 33rd save.

Renfroe hit a tying home run in the fourth inning and an RBI double in the three-run fifth.

Padres rookie right-hander Chris Paddack left after six with a 5-3 lead. Craig Stammen started the seventh and promptly allowed Chris Iannetta's double to right followed by Alonso's homer that just cleared the wall in right as Renfroe leaped for it.

It was the second pinch-homer of Alonso's career, his ninth overall this season and his second with the Rockies. He was released by the Chicago White Sox on July 3 and signed to a minor league contract by the Rockies on July 10. His contract was selected from Triple-A Albuquerque on July 23.

Nolan Arenado gave the Rockies a 2-1 lead with his 26th homer, a 399-foot shot off Paddack into the balcony on the third level of the Western Metal Supply Co. Building in the left-field corner with one out in the fifth.

Renfroe tied it leading off the bottom of the inning with a moonshot homer into the stands in left, his 31st.

The Rockies got one back in the sixth when Trevor Story hit a one-out double and scored on Arenado's two-out single. The Rockies loaded the bases on a walk by Ryan McMahon and an error on Tatis before Paddack got Yonathan Daza to ground out to end the threat.

Padres: Announced LHP José Castillo will miss the rest of the season after injuring the middle finger on his pitching hand Thursday night. Castillo was activated from the 60-day injured list earlier Thursday and lasted just four batters before getting hurt.

Padres: RHP Dinelson Lamet (1-2, 3.90) makes his first start since taking a no-hitter into the seventh inning at Seattle.