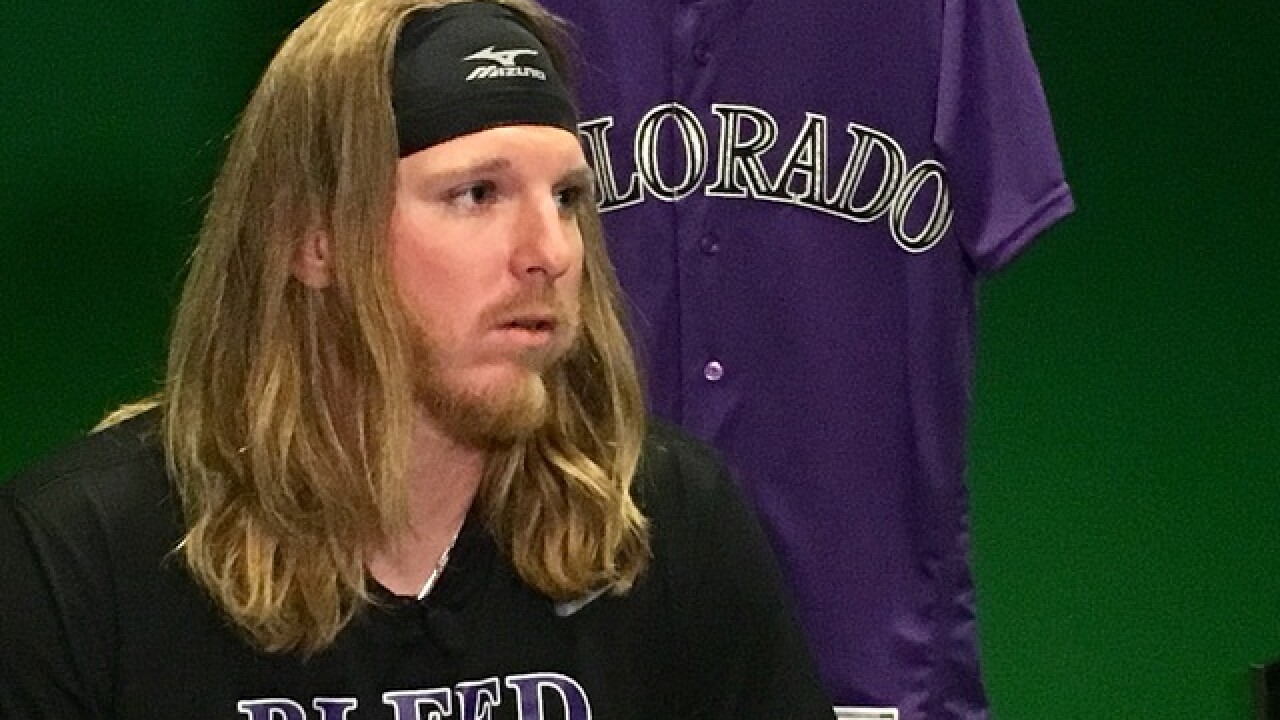 SCOTTSDALE, Ariz. -- Jon Gray remains impossible to miss when discussing the Rockies. The first thing you notice is the hair. The brown locks cascade over his shoulders making him a dead ringer for a faux 1980s heavy metal singer.

When Gray arrived for spring training in 2014, he looked the part of a burly country kid with a short mane and a big fastball. By 2015, Gray began to evolve and sprout. Especially his locks, which he has not cut in more than two years.

"I am going to donate (the hair) to charity and hope to get other people on board, too. I am looking to cut it with June as the target date," Gray told Denver7 last week. "I want to help out other people. A friend told me about it a few years ago, and it made sense."

Everything seems plausible for the Rockies when Gray pitches. He makes his first opening day start Monday at 12:10 p.m. at Milwaukee. He represents an ace straight out of central casting. He stands 6-foot-4, weighs 235 pounds (down from 265 in his early college days) and throws 97 mph fuzz. Add in a wipeout slider, improving curveball and sneaky cutter, and "I feel like I have more options than ever," Gray admitted.

Gray, 25, needs his pitching to grow like his hair. Linear progression for Rockies' arms has forever been a problem. Dramamine remains required to stomach the dramatic highs and lows. No young pitcher, save for Chin-Hui Tsao, owned Gray's talent, though.

Taken third overall in 2013 after Chicago's Kris Bryant -- the Rockies had their eyes on Bryant figuring the Cubs would select Gray -- the right-hander broke through last season.

He struck out 185 batters in 168 innings, ninth best in the National League. He finished 10-10 with a 4.61 ERA, offering hints of future stardom. For Gray, the challenge is blunt: develop into a No. 1 starter, a status desperately needed with steady Chad Bettis out indefinitely while undergoing chemotherapy.

"There are expectations for me to keep climbing. I am focusing on the small things, to leave the field better than I was the day before," Gray said. "I look at my role this way: It's about giving my team a chance to win. Whenever I take the mound I want my teammates to feel confident we are going to win."

For Gray, improvement lies in consistency. Eight times last season he worked fewer than five innings. Staff rudders are defined by their ability to grind through outings without their best stuff. With the Rockies starting rookies in the fourth and fifth rotation spots -- Antonio Senzatela and former Thomas Jefferson star Kyle Freeland -- Gray needs to gulp innings to protect the bullpen.

Interestingly, Gray's confidence only began to mushroom last season. It seems odd given his lifetime of success.

"It was a little too late that I started believing I belonged," Gray allowed. "I know now what I can do and what I am capable of doing going forward. I am ready."

For the Rockies, this spring felt like a rebirth. No longer viewed as an afterthought, the players hold postseason hopes without smirking or rolling their eyes. Third baseman Nolan Arenado believes its the best team in his Rockies career. Carlos Gonzalez insists new manager Bud Black will make a difference with the pitching staff. And yet, a gnawing feeling exists in the gut because of a rotation that includes Three Men and Two Maybes.

"The concern for me is the starting experience. Not their ability. I like these guys. I mean Gray has it, I like (Tyler) Chatwood, (Tyler) Anderson has 20 major league starts. The two guys at the end will be young guys. I don't mind that. They won't be scared," Black said. "But it keeps you up a little bit at night."

Gray can provide easy ZZZs with consistent Ks. If he morphs into a predictable monster, the rotation will order itself, and bullpen roles can form organically. Consistent growth, as Gray flips his hair back, is the key.

"It's different this season. Just look at the names we brought in. Look at the players we have, the depth we have now," Gray said. "We have unlimited amounts of talent. We just have to put in the work."

The Rockies set their 25-man roster on Sunday. They added Freeland to the roster, and surprisingly designated reliever Miguel Castro for assignment. He was part of a trade involving Troy Tulowitzki that has yet to bear fruit. Jeff Hoffman, the center piece of the deal, failed to earn a rotation spot and will start the season in Triple-A. ... Stephen Cardullo made the team as a reserve outfielder. Mark Reynolds will help fill the void at first base with Ian Desmond out until mid April with a broken hand.