Gennett has 5 hits to lead Reds over Rockies 6-5 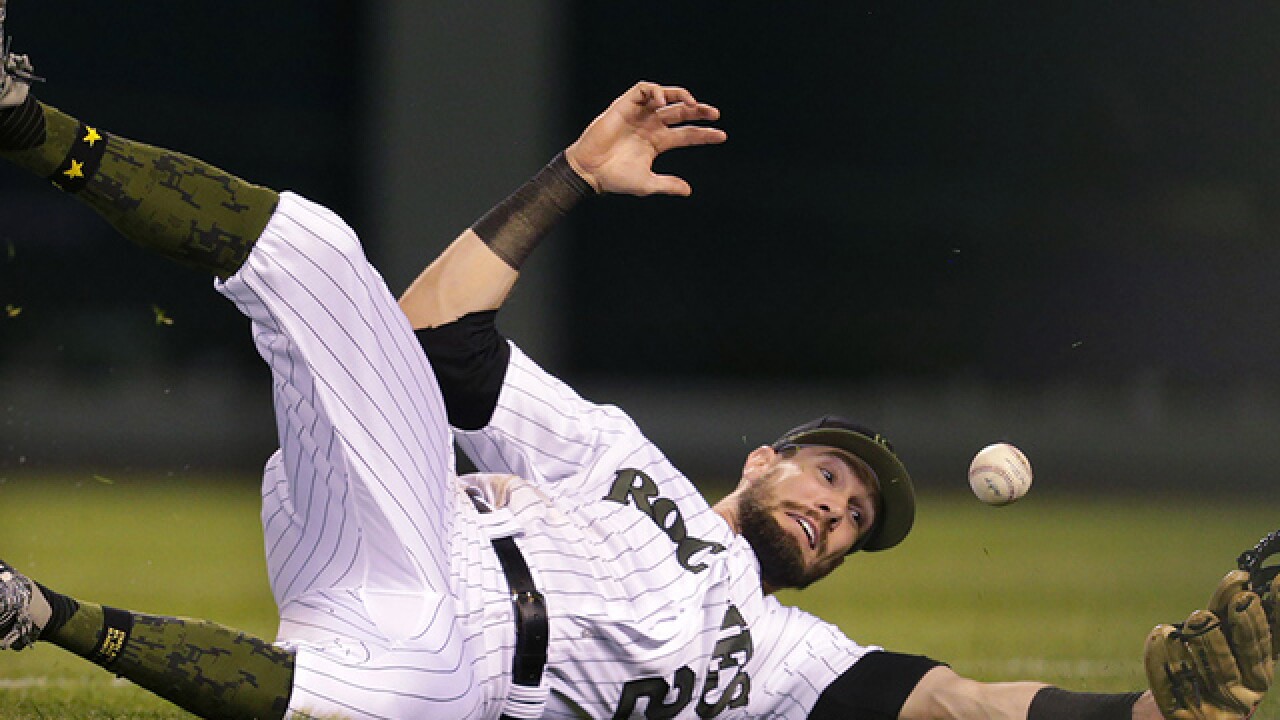 Copyright 2018 Scripps Media, Inc. All rights reserved. This material may not be published, broadcast, rewritten, or redistributed.
Joe Mahoney
<p>DENVER, CO - MAY 26: David Dahl #26 of the Colorado Rockies slides and misses a foul ball hit by Billy Hamilton #6 of the Cincinnati Reds in the ninth inning at Coors Field on May 26, 2018 in Denver, Colorado. Cincinnati won 6-5. (Photo by Joe Mahoney/Getty Images)</p>

DENVER (AP) — Scooter Gennett capped his big day at the plate with a game-saving play in the field for the Cincinnati Reds.

Gennett tied a career high with five hits, including a solo homer, and then made a diving catch in the ninth to preserve the Reds’ 6-5 victory over the Colorado Rockies on Saturday night.

It marked the second time in Gennett’s career that he collected five hits, previously accomplishing the feat against the St. Louis Cardinals on June 6, 2017.

Gennett’s defense sealed the win after the Rockies loaded the bases in the ninth against reliever Jared Hughes. Ryan McMahon, recalled from Triple-A Colorado Springs earlier in the day, led off with his second single and Chris Iannetta doubled to put runners on second and third. Hughes walked pinch-hitter Carlos Gonzalez to load the bases, but got Charlie Blackmon to ground into a forceout at the plate for the first out.

David Dahl, who drove in three runs, then lined out to Gennett at second, and the Reds second baseman doubled off Gonzalez to end the game.

“Right when he hit it, I felt like we would have a chance at getting him at (second),” Gennett said. “But that ball was hit pretty hard. I didn’t have too much time to think.”

It was the fifth double play the Rockies hit into Saturday night, which tied a franchise record.

“A couple of more feet to the left or the right, it’s a game-winner,” Dahl said. “I did everything I could do to hit the ball in the air. I hit the ball hard, he just made a good play. It was a high-to-low real quick.”

Gennett hit his 10th homer in the first and Cruz hit a two-run shot in the third to give the Reds the early lead.

The Rockies went ahead 4-3 in the fifth on Blackmon’s RBI triple and a sacrifice fly by Dahl, but the Reds scored three times off Colorado’s bullpen to take the lead.

Chris Rusin (0-1) picked up the loss after allowing two hits to the only batters he faced.

Nolan Arenado doubled and scored in the seventh to cut Cincinnati’s lead to one.

Reds: RHP Anthony DeSclafani (left oblique strain) pitched in another rehab assignment for Triple-A Louisville on Friday night and appears closer to returning from the 60-day DL. “I think he’s got one more scheduled,” interim manager Jim Riggleman said. “His previous one was very strong, this one got hit around a little bit. That certainly happens on those rehabs. You never know what’s going to happen in those things.”

Rockies: 2B DJ LeMahieu (right hamstring strain) hit in the cage Saturday and is making progress, manager Bud Black said. “He came out of that feeling well. We’re encouraged by where he is,” Black said. “We’re going to push him a little bit more the next few days. No timetable on a rehab or when he’s going to play, but he’s doing better. DJ feels as though the last four or five days he’s made a lot of progress.”

Gennett’s torrid night at the plate continued a hot month for the second baseman. Gennett is batting .392 with eight home runs and 22 RBIs in May.

“He’s locked in right now,” Iannetta said. “He’s a guy we knew coming into the series has been swinging the bat really well.”

Cincinnati’s Billy Hamilton settled for a triple leading off the seventh inning, but the speedster was eyeing more as he came around second. Third base coach Billy Hatcher put up the stop sign so Hamilton missed getting his first inside-the-park home run.

Reds: RHP Matt Harvey (1-2, 5.49) will make his fourth start since Cincinnati acquired him from the New York Mets on May 8. Harvey went six innings to get the win in his last start, Tuesday against Pittsburgh.