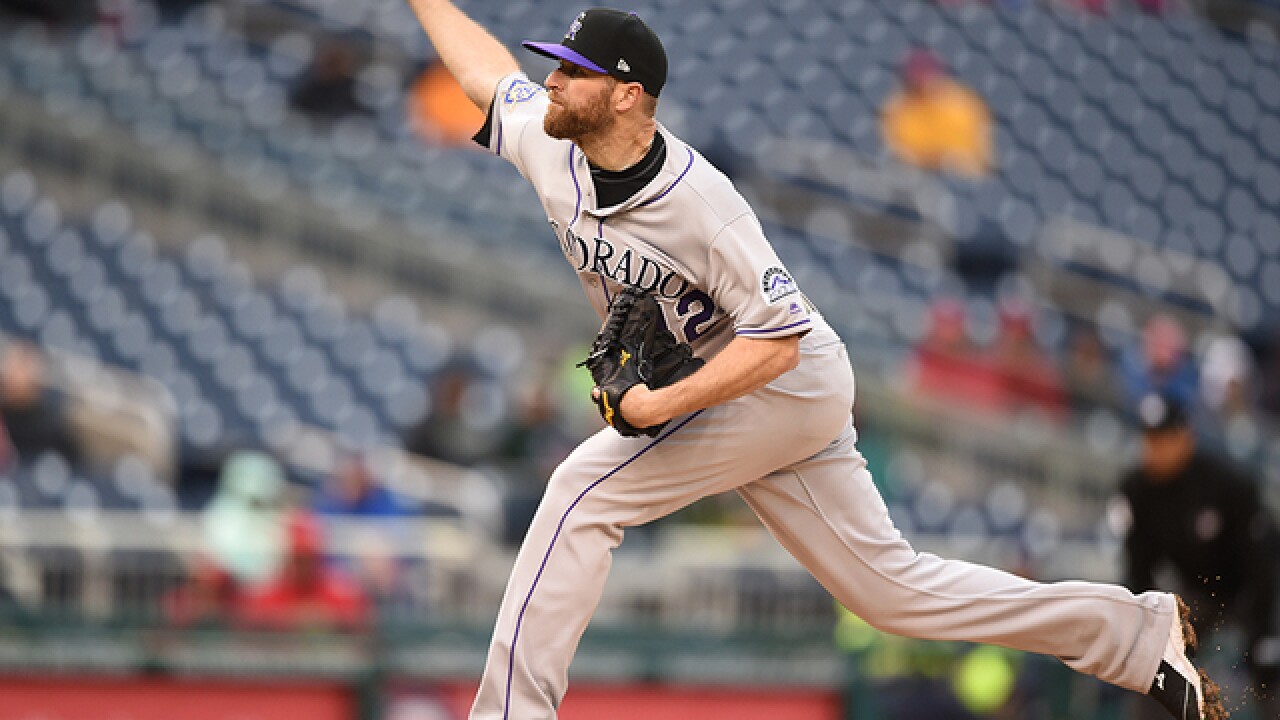 Copyright 2018 Scripps Media, Inc. All rights reserved. This material may not be published, broadcast, rewritten, or redistributed.
Mitchell Layton
<p>WASHINGTON, DC - APRIL 15: Wade Davis #42 of the Colorado Rockies pitches in the ninth inning for his 7th save during a baseball game against the Washington Nationals at Nationals Park on April 15, 2018 in Washington, DC. All players are wearing #42 in honor of Jackie Robinson Day. (Photo by Mitchell Layton/Getty Images)</p>

WASHINGTON (AP) — Ian Desmond hit a tiebreaking, two-out homer in the ninth inning against his former team, Charlie Blackmon drove in three runs and the Colorado Rockies rallied to beat the Nationals 6-5 on Sunday, ending a dispiriting homestand for Washington.

After Sean Doolittle (0-1) struck out Carlos Gonzalez and Gerardo Parra to open the ninth, Desmond sent a belt-high, 3-2 fastball over the 402-foot sign in straightaway center as Colorado took three out of four in its only visit to Washington.

Desmond played his first seven seasons in the majors for the Nationals, through 2015. He became an All-Star shortstop and hit 110 home runs with Washington.

Bryce Harper hit his big league-leading seventh home run for Washington, connecting in the first and pausing to admire his deep drive to right-center.

Blackmon did his damage against the otherwise stingy Stephen Strasburg. His two-out homer in the fourth was the Rockies' first hit off Strasburg, who retired the first 11 batters. In the sixth, Blackmon squeezed a grounder past first baseman Ryan Zimmerman into the right-field corner to score two runs and tie the game at 3. Gonzalez followed with a single against the shift to score Blackmon.

Adam Ottavino (3-0) got the win despite being rattled by the speedy Michael A. Taylor. After Taylor doubled down the left-field line with two outs in the eighth, he stole third easily. Then he bluffed stealing home to get Ottavino's attention.

On the next pitch, Taylor danced a third of the way down the baseline and Ottavino distractedly threw a wild pitch, allowing Taylor to race home.

Wade Davis worked the ninth for his seventh save in eight opportunities.

The Nationals won just three times in their 10-game homestand and are 3-9 since starting the season 4-0. Washington did not get a hit with a runner on base, and three of its runs came on miscues by Colorado. Cleanup hitter Ryan Zimmerman went 0 for 5, grounding out to short with Harper on first base to end the game, and his average dropped to .122.

Rockies starter Tyler Anderson was pulled with two outs in the fifth after allowing his sixth walk. Antonio Senzatela came on and his 2-1 pitch, an inside fastball to Zimmerman, got past catcher Chris Iannetta. Taylor scored on the passed ball and Trea Turner also scored after Iannetta's throw sailed over Senzatela's head for an error.

Matt Wieters homered in the sixth to tie it for Washington. DJ LeMahieu put the Rockies ahead 5-4 in the eighth with a homer to right-center off Shawn Kelley, the second homer the right-hander has allowed in 5 2/3 innings this season. Kelley allowed a dozen long balls in 26 innings in 2017.

Nationals: 2B Daniel Murphy (offseason knee surgery) was scheduled to report Monday to Washington's extended spring training in West Palm Beach, Florida, manager Dave Martinez said. There is no timetable for his return to the lineup. The three-time All-Star was in the clubhouse Sunday morning, wearing a knee brace. "I would think that he'd have to treat it like spring training and we'll see where he's at. The biggest thing, we got this far, is not to start pushing him. He's progressing really well so we've just got to make sure we don't push him too fast right now," Martinez said. ... 3B Anthony Rendon, who fouled a ball off his left big toe on Friday, remained day to day. "It was pretty swollen, black and blue, so I would assume when you get hit like that, you're probably going to lose a nail," Martinez said. "It wasn't pretty." ... OF Brian Goodwin, who was scratched from Saturday's lineup after he became sore in the cage during warmups, was available to pinch-hit Sunday.

TRAILBLAZER ON THE MOUND

Congressman John Lewis, a Georgia Democrat and civil rights leader who helped direct the march over the Edmund Pettus Bridge in Selma, Alabama, in 1965, threw out the ceremonial first pitch on Sunday, the day Major League Baseball honored Jackie Robinson for breaking the color barrier. He received a warm ovation from a tiny crowd in cool, rainy and windy conditions.

"John Lewis is John Lewis. The name speaks for itself," Martinez said. "He's just one of those people that, you know, people respect and admire."

Sunday was also the Nationals' annual Black Heritage Day, and pregame ceremonies also included Lt. Gen. Leslie Smith, the inspector general of the U.S. Army, and members of the Mamie Johnson Little League and the Jackie Robinson Foundation and students from Howard University.

Attendance was announced at 25,462, but there appeared to be less than half that number in the stands. The gametime temperature was 52 degrees with strong wind and intermittent rain.