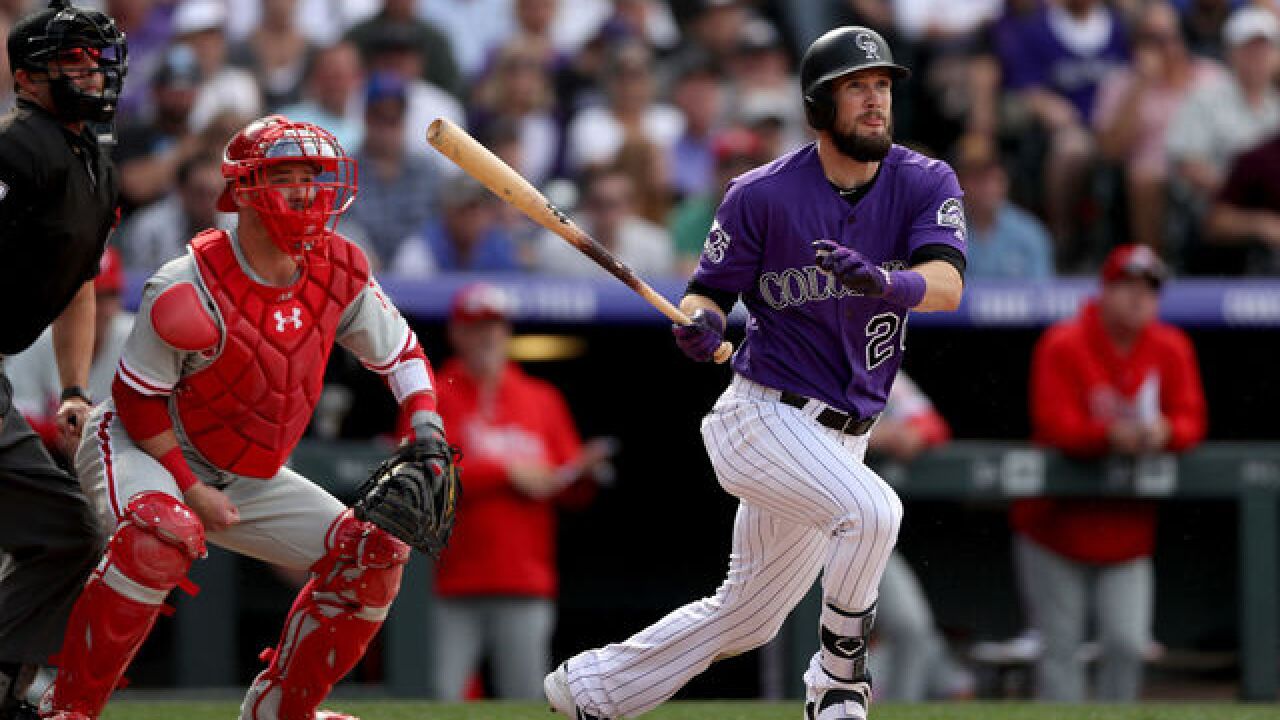 DENVER (AP) — David Dahl homered for the fourth straight game, and the Colorado Rockies opened a one-game NL West lead over the Los Angeles Dodgers with a 5-3 victory over the Philadelphia Phillies on Thursday that extended their winning streak to seven.

Trevor Story and Gerardo Parra also went deep for the Rockies (89-70), who matched their losing winning streak this season. Dahl hit a run-scoring triple and finished the four-game sweep with eight hits and 11 RBIs.

Trying for the first NL West title in team history, Colorado closes at home with three games against Washington and already is assured its winningest season since going 92-70 in 2009.

The second-place Dodgers (88-71) also are one game ahead of St. Louis (87-72) for the second NL wild-card berth and finish with a three-game series at San Francisco.

Jose Bautista and Carlos Santana homered for the Phillies, outscored 39-7 in the series. Philadelphia (78-81), which struck out 14 times for the second day in a row, has lost a season-high eight straight and has gone 15-33 since moving a season-high 15 games over .500 on Aug. 5. The Phillies are assured their seventh straight season without a winning record, their most since 1994-2000.

Scott Oberg (8-1) pitched 1 1/3 hitless innings in relief of Antonio Senzatela, who allowed one run and five hits in 4 2.3 innings. Oberg relieved with two on in the fifth and struck out Carlos Santana, then fanned two in a perfect sixth.

Wade Davis gave up Carlos Hernandez's leadoff single in the ninth, struck out J.P. Crawford and Roman Quinn, then retired Rhys Hoskins on a popup for his NL-leading 42nd save in 48 chances.

Jake Arrieta (10-11) gave up three runs and six hits in six innings. He had a 3.96 ERA, his highest since 2013, in his first season with the Phillies after agreeing to a $75 million, three-year contract on March 12, a month into spring training.

Dahl hit his 14th home run in the first and Story hit his 35th in a two-run second that also included a run-scoring wild pitch that followed Andrew Knapp's passed ball.

Bautista homered in the third, but the Rockies opened a 5-1 lead in the seventh when Parra homered as a pinch hitter and Dahl tripled.

Santana hit a two-run homer in the eighth off Adam Ottavino, who walked Dylan Cozens and struck out his next three batters.

Rockies: LHP Tyler Anderson is to throw a bullpen session Friday to determine whether he will beavailable Sunday as the starter or to come in as a reliever. Anderson had his last start scratched due to shoulder tightness.

Phillies: RHP Jerad Eickhoff (0-0, 9.00) is slated to open a three-game series against Atlanta on Friday night.

Rockies: LHP Kyle Freeland (16-7, 2.84) starts the series against the Nationals.