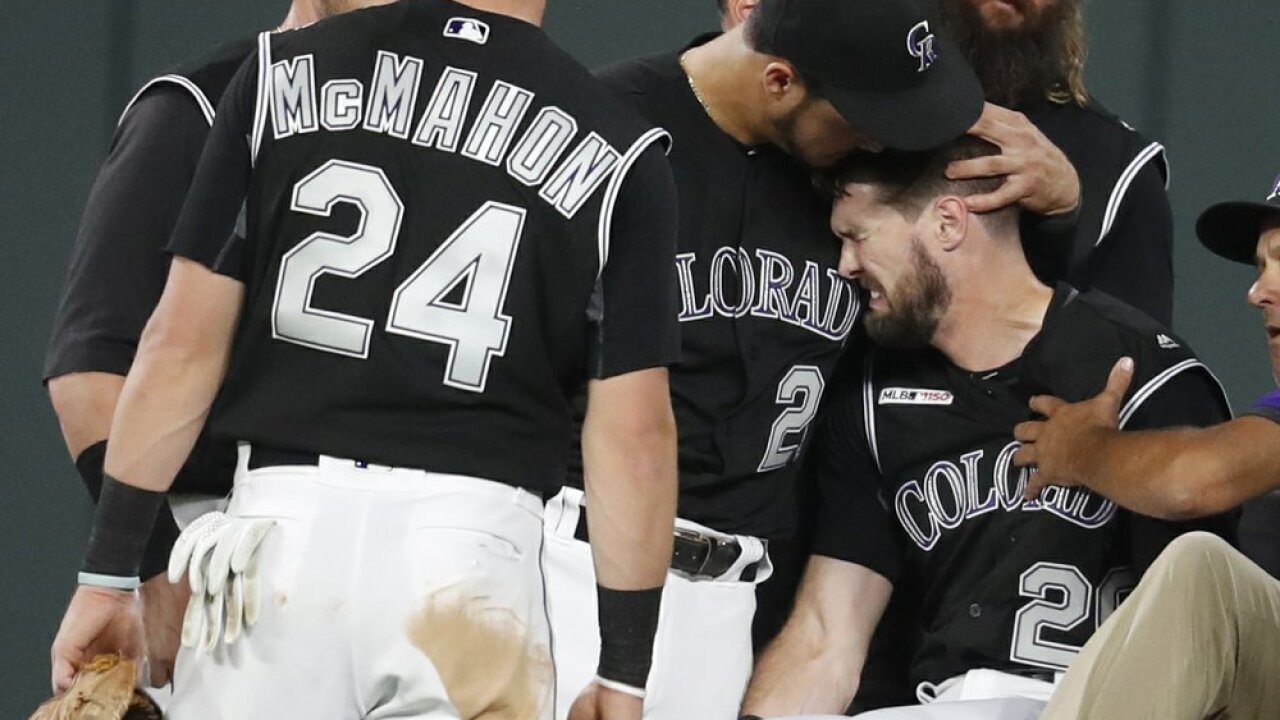 Rockies center fielder David Dahl was carted off the field after spraining his ankle while making an awkward catch, and substitute Ian Desmond hit a tiebreaking double in the seventh inning that sent Colorado Rockies over the San Francisco Giants 5-4 Friday night.

Dahl left in obvious pain as his teammates gathered around. The Rockies said X-rays on his right ankle were negative, and the club had yet to determine the severity of the injury.

Dahl, a first-time All-Star this season, slightly overran a sinking flyball from Scooter Gennett in the sixth inning, planting his feet to make a sudden stop and leaning back to make the catch.

But Dahl’s right foot caught in the grass and he crumpled to ground, grimacing and grabbing his ankle. The game was stopped for several minutes while medical personnel assessed the injury and brought the cart out to carry him off the field.

Trevor Story and Ryan McMahon also homered for the Rockies. Mike Yastrzemski had a home run and Austin Slater hit a run-scoring triple for the Giants.

Scott Oberg, designated the Rockies’ closer in place of slumping Wade Davis earlier in the day, got out of a two-on, one-out jam by getting Yastrzemski to ground into a game-ending double play for his fourth save of the season.

It was just the second time in seven games at Coors Field that the Rockies had beaten the Giants this season.

Trailing 2-1 going into the fifth, the Giants struck for three runs on an RBI triple by Austin Slater and a two-run drive by Yastrzemski off Peter Lambert estimated at 472 feet. The ball bounced off the facade of the third deck at Coors Field and fell behind the center field fence.

The Rockies came back to even the score at 4 in the sixth. Daniel Murphy singled, Sam Selman relieved Shaun Anderson, and McMahon followed by connecting for his 12th home run of the season.

Giants: CF Kevin Pillar did not start to give him a chance to rest a sore hip and lower back. He sustained the injury Thursday when he crashed into the wall at Philadelphia trying to make a catch. Pillar came on as a pinch-runner in the ninth. ... SS Brandon Crawford was cleared to play after getting through pre-game warmups with no signs of lingering shoulder pain. Crawford came out of Thursday’s game at Philadelphia early after jamming his shoulder diving for a grounder.

Gennett, acquired Wednesday in a trade with Cincinnati, joined the Giants in Denver in time to make his debut with his new team. OF Steven Duggar also was recalled from Triple-A Sacramento. To make room for the additions, the Giants designated INF/OF Tyler Austin for assignment and optioned RHP Dereck Rodriguez to their Sacramento farm club.

Bruce Bochy, making his final appearance this weekend at Coors Field as the Giants manager before retiring at the end of this season, was presented with the “SF” sign from the Rockies’ out of town scoreboard. The parting gift was presented to Bochy by Rockies counterpart Bud Black, and team owner Richard Monfort during a pregame ceremony at homeplate. Bochy has managed 212 games at Coors Field, more than twice as many as any other opposing manager, while leading the San Diego Padres (1995-2006) and Giants (2007-current).

Giants: LHP Madison Bumgarner (6-7, 3.74 ERA) is slated to start Saturday night, his first since Wednesday’s expiration of the trading deadline. The Giants opted to retain their ace rather than deal him as part of an all-out rebuild after a midseason surge revived the team’s playoff hopes.