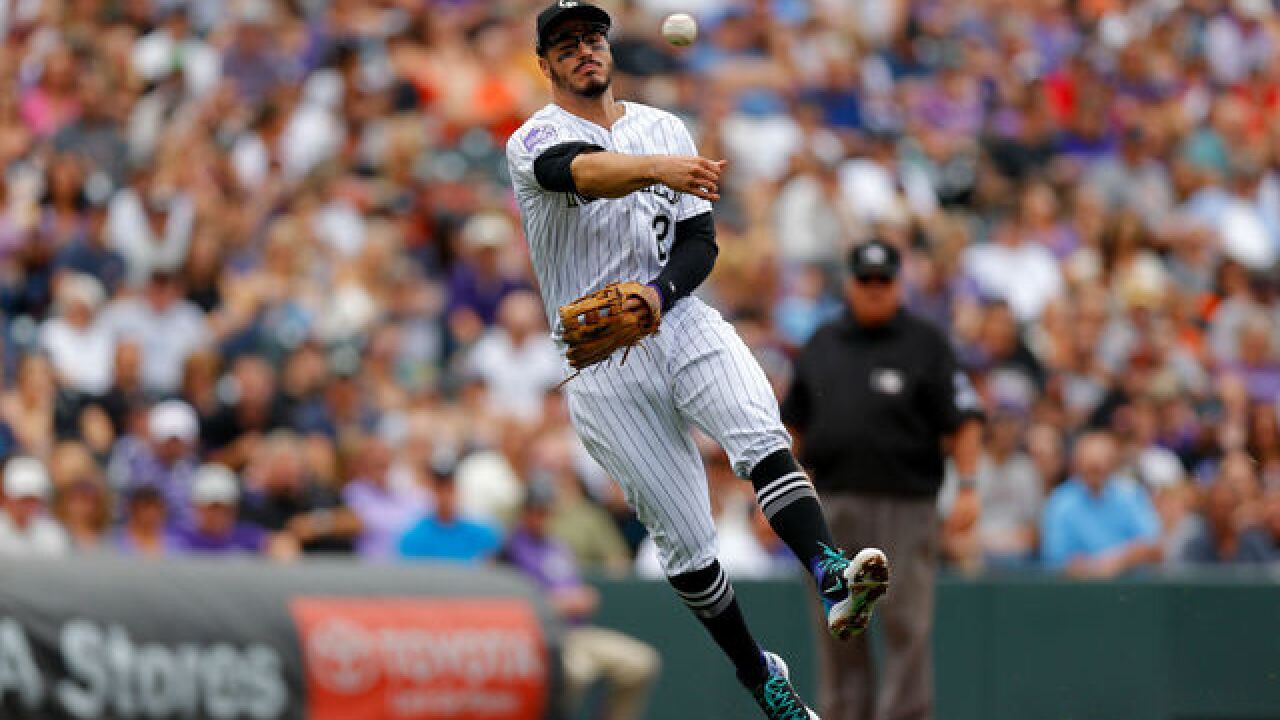 2018 Getty Images
Justin Edmonds
<p>DENVER, CO - SEPTEMBER 3: Third baseman Nolan Arenado #28 of the Colorado Rockies throws on the run for the first out of the third inning against the San Francisco Giants at Coors Field on September 3, 2018 in Denver, Colorado. (Photo by Justin Edmonds/Getty Images)</p>

DENVER (AP) — Pinch-hitter Noel Cuevas delivered a go-ahead, two-run single in the eighth inning and the Colorado Rockies rallied to beat the San Francisco Giants 9-8 on Monday after squandering a five-run lead.

On an afternoon when Trevor Story hit two homers off Giants ace Madison Bumgarner and the Rockies seemed in command at 7-2 after five innings, they needed the rookie Cuevas to come through with a clutch hit.

Colorado had a 7-5 lead in eighth when Giants pinch-hitters Alen Hanson and Chris Shaw hit back-to-back homers off reliever Seunghwan Oh (6-3). Hanson tied the game at 7 on a two-run homer and three pitches later Shaw lined an 0-2 cutter from Oh over the fence in right for his first career homer.

The Rockies answered right back, with Ian Desmond starting the inning with a single and pinch-hitter Chris Iannetta later lining a double. Cuevas brought them in with a grounder up the middle through a drawn-in infield off reliever Tony Watson (4-6).

Wade Davis struck out the side in the ninth for his 38th save as the Rockies remain in the thick of the NL West chase. They entered the day a half-game behind the Los Angeles Dodgers.

It's a pivotal stretch for Colorado, which kicked off 10 straight at home and all against NL West foes.

Colorado scored four times in the first off Bumgarner, who threw 35 pitches in facing nine hitters. DJ LeMahieu and Story each hit two-run homers in the inning.

Story added a three-run homer off Bumgarner in the fifth. The shortstop has a career-high 28 homers this season.

San Francisco cut the lead to 7-5 in the seventh on Evan Longoria's two-out, two-run triple. Gold Glove third baseman Nolan Arenado had a chance to get the Rockies out of the inning with no damage, but he bobbled Chase d'Arnaud's grounder and couldn't turn a double play.

Gorkys Hernandez homered for the Giants, who've dropped 15 of 17 in Denver since 2017. Bumgarner gave up a season-high seven runs, six earned, and surrendered three homers in a game for the seventh time in his career.

Rockies starter Tyler Anderson was in line for his first win since July 4 before the bullpen melted down. The left-hander hit an August slump in which he was 0-4 with an 11.39 ERA. He had seven days off between starts and his command appeared back in rhythm as he allowed three runs and struck out seven over 5 1/3 innings.

Giants: OF Steven Duggar will undergo surgery on his left shoulder Tuesday. ... INF Brandon Belt wasn't in the starting lineup due to right knee soreness.

Rockies: LHP Mike Dunn is planning to have season-ending shoulder surgery. The reliever has been on the disabled list since July 7 with discomfort in the AC joint.

Giants rookie RHP Dereck Rodriguez (6-2) has a 2.47 ERA heading into his start Tuesday against Colorado. He's also holding hitters to a .207 average. Rockies RHP German Marquez (11-9, 4.11) is coming off a start in which he had 13 strikeouts.