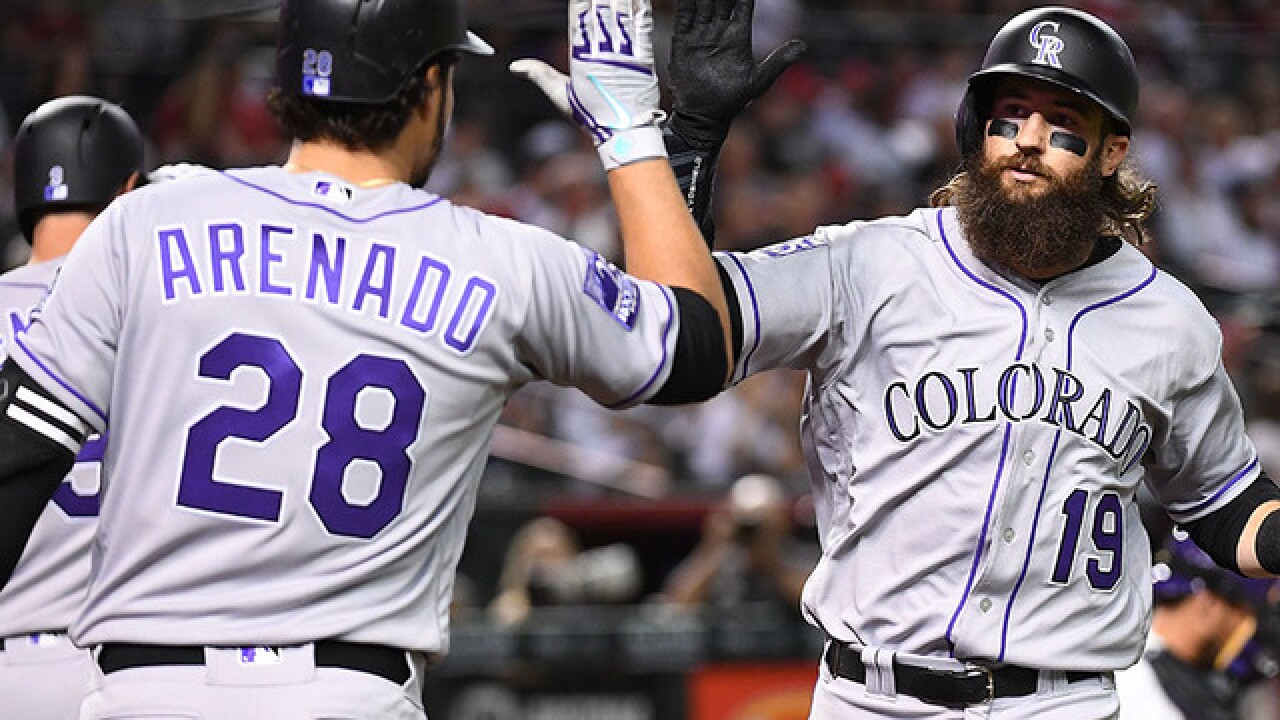 Copyright 2018 Scripps Media, Inc. All rights reserved. This material may not be published, broadcast, rewritten, or redistributed.
Jennifer Stewart
<p>PHOENIX, AZ - MARCH 31: Charlie Blackmon #19 of the Colorado Rockies is congratulated by Nolan Arenado #28 after hitting a solo home run in the eighth inning of the MLB game against the Arizona Diamondbacks at Chase Field on March 31, 2018 in Phoenix, Arizona. (Photo by Jennifer Stewart/Getty Images)</p>

DENVER — Nolan Arenado represents the Rockies' best player. However, Charlie Blackmon has become the bearded face of the franchise. The Rockies assured he is not going anywhere anytime soon.

Affirming his rise to stardom. Blackmon agreed to a six-year contract worth $108 million, according to major league sources, that could keep him with the club through 2023.

Blackmon, who finished fifth in the National League MVP voting last year and won a batting title, was set to become a free agent after this season. He has long stated his desire to stay in Colorado, ideally with close friends Arenado and second baseman D.J. LeMahieu.

Blackmon's contract provides flexibility for the Rockies to attempt to keep Arenado, who can become a free agent after the 2019 season. LeMahieu's situation remains less certain because top prospect Brendan Rodgers could be ready to take his spot next season. Blackmon's deal amounts to a three-year extension for $63 million with two player options for 2022 and 2023.

Blackmon, who turns 32 on July 1, had agreed to a $14 million contract this season to avoid arbitration prior to spring training. It means his guaranteed three-year extension will average a tick above $20 million through 2021. The final two seasons in 2022 and 2023 are player options.

It's hard to overstate the unique nature of Blackmon's story. He arrived at Georgia Tech as a pitching prospect following a junior college career. He was not doing well and talked his way onto a summer collegiate team as an outfielder. He crushed it and returned to Atlanta and asked his coaches if he could hit. They reluctantly agreed. Blackmon never looked back, morphing into a college star that the Rockies selected in the second round of the 2008 draft.

Since becoming a regular in 2014, Blackmon owns 106 home runs with 165 extra-base hits. Blackmon is a two-time All-Star and has twice won the Sliver Slugger award. Blackmon ranks third in franchise history in stolen bases, fourth in batting average, sixth in triples, seventh in runs scored and hits, 10th in games played (769), 11th in doubles, and is tied for 11th in home runs.