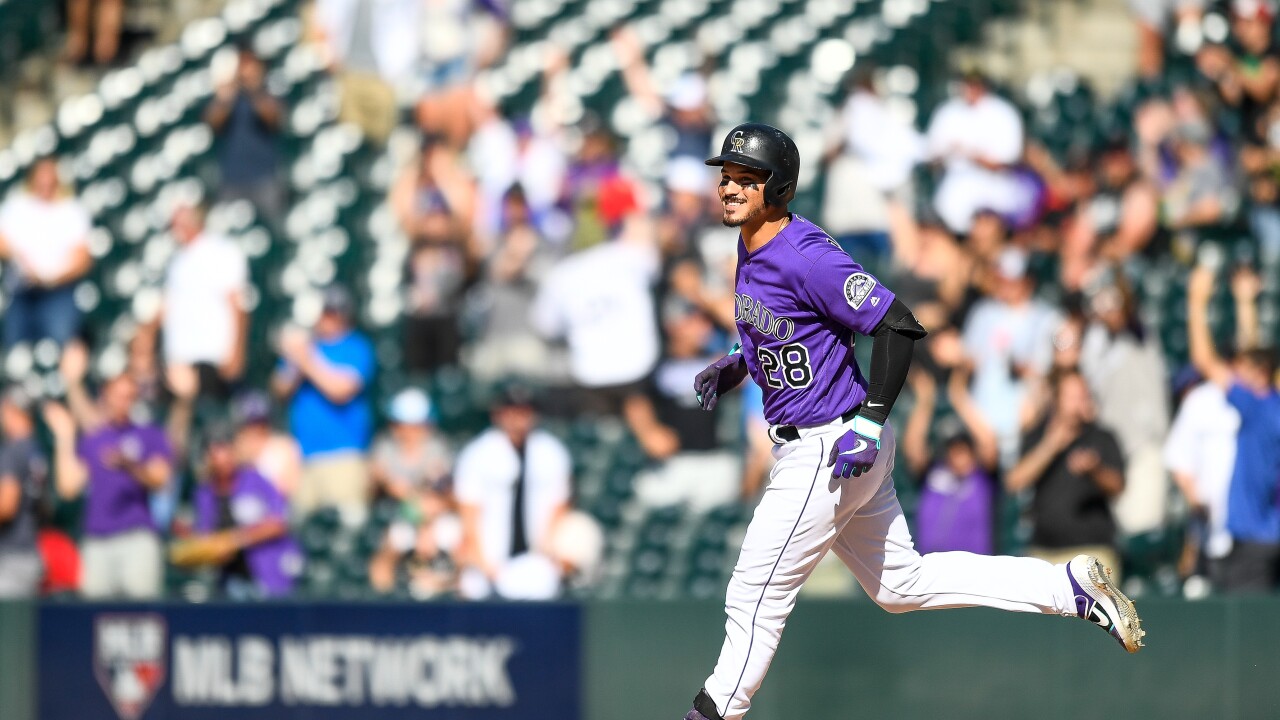 DENVER (AP) — Nolan Arenado lingered near the batter's box a little longer than usual as he stared at his liner.

It wasn't to admire. It was simply to make sure.

In a season that's been so foul for Colorado, he wanted to double-check that his deep drive indeed stayed fair before celebrating.

Arenado hit a two-run homer in the ninth inning to give the Rockies a 7-6 victory over the Arizona Diamondbacks on Wednesday.

A rare bright spot in what's been a trying stretch for a club that's all but assured it won't be making a third straight postseason appearance. The Rockies are 14-33 since June 21, which is one of the worst marks by winning percentage in the majors over the time frame.

"It's been a grind for all of us individually and as a team," said Arenado, who'd left four runners on base before connecting on his 27th homer of the season. "It feels good to come out with a win right there."

After Trevor Story was hit by a pitch to start the ninth, Arenado launched a fastball from Archie Bradley (3-5) over the fence in left — and just fair. It was Arenado's third career walk-off homer and first since June 18, 2017, against San Francisco.

"I hit it good," Arenado said.

Bradley threw it good, too.

Immediately after contact, Bradley began walking toward the dugout. He knew. He had his career-best string of 17 1/3 scoreless innings snapped.

"This is our last time here and I'm not sad about it," Bradley said about Coors Field. "I will be the first person happy to get out of here."

Arenado was doused with Powerade soon after crossing home plate and mobbed by teammates. Colorado ended a string of five straight losses to Arizona.

Arenado's homer came after Ketel Marte delivered a two-out, run-scoring bloop single in the top of the inning to give the Diamondbacks the lead. Marte dropped a slider from closer Scott Oberg (6-1) just over the head of Story, who turned and threw home too late. It was Marte's career high-tying fourth hit of the day.

Eduardo Escobar hit a two-run homer and Wilmer Flores added a solo shot in the sixth to give Arizona a 5-2 lead. The Rockies tied it up on pinch-hitter Ryan McMahon's three-run homer in the bottom half of the inning off Yoshihisa Hirano.

The Diamondbacks' bullpen was pressed into duty earlier than expected when starter Robbie Ray left in the third inning because of spasms in his lower back. Ray made one warmup pitch before the trainer came out to check on him. He said he could've pushed through, but he didn't "want it to turn into something that is a bigger issue."

It was far from a defensive clinic for the Diamondbacks, who committed a season-high four errors. Christian Walker, Nick Ahmed and Marte were charged with errors on fielding plays and Flores on a throw.

"This," Diamondbacks manager Torey Lovullo said, "is a tough game to absorb."

Diamondbacks: OF David Peralta has been dealing with a stiff neck and didn't start on his 32nd birthday. He entered in the seventh as part of a double-switch and had a single in the eighth.

Rockies starter Kyle Freeland allowed two runs in the first before settling down. He fell apart again in the sixth in surrendering three more. The scuffling left-hander who finished fourth in the NL Cy Young voting a season ago allowed five runs over six innings in the no-decision.

Lovullo is impressed by the poise of rookie outfielder Josh Rojas, who was acquired in the deal that sent Zack Greinke to Houston.

"He looks me in the eye when he talks to me," Lovullo said. "Young players have a tough time doing that."

Lovullo still has a hard time believing that Rojas lasted until the 26th round of the 2017 draft before the Astros selected him.

"They uncovered somebody that's pretty special," Lovullo said. "This looks like a first-round draft choice to me."

Rojas didn't start but entered as part of a double-switch in the sixth. Rojas had a double.

Diamondbacks: Begin a four-game series against San Francisco on Thursday. Lefty Alex Young (4-2, 3.32 ERA) gets the start for the Diamondbacks.

Rockies: After a day off, the Rockies host Miami for three games. Righty Jon Gray (10-8, 4.06) takes the mound Friday after skipping his scheduled start Tuesday due to a sore left ankle. The Marlins will throw right-hander Sandy Alcántara (4-10, 4.44).