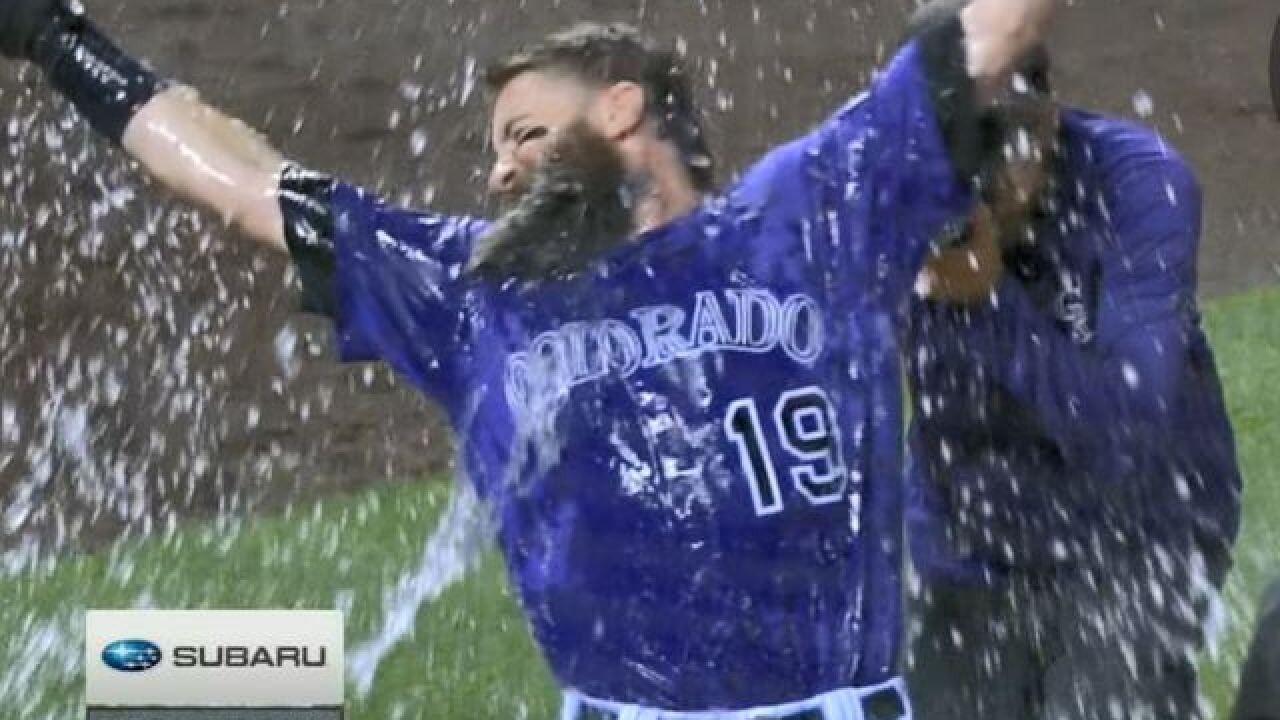 DENVER (AP) — Charlie Blackmon hit a solo home run with one out in the bottom of the ninth inning and the Colorado Rockies held the World Series champion Houston Astros to one hit at Coors Field in a 3-2 victory Wednesday night.

Blackmon drove a 3-1 pitch from Collin McHugh (5-1) into the Astros’ bullpen for his 20th home run of the season and second career game-ending hit. It was a dramatic finish to a wild game in which the Astros had a hit wiped out after a replay review because of fan interference, and the Rockies scoring the tying run on a foul popup.

AL MVP Jose Altuve ended up with Houston’s only hit — an RBI double — before leaving with discomfort in his right knee.

Wade Davis (1-3) worked a scoreless inning for the win.

Leading off the sixth, Alex Bregman cruised into third with an apparent triple off the wall that eluded the leap of Colorado left fielder Gerardo Parra.

Rockies manager Bud Black challenged for fan interference, and Bregman was ruled out after replays showed a spectator clad in an orange Astros jersey extended his glove over the railing enough for the ball to glance off it, changing its trajectory slightly at the moment Parra was reaching up to attempt the catch. The fan was escorted out of the ballpark by security.

Colorado tied it 2-all thanks to heads-up baserunning by Raimel Tapia, who tagged up and scored from third when third baseman J.D. Davis sprinted toward the Houston dugout and tumbled over the railing as he caught Nolan Arenado’s foul pop. Davis’ teammate, Evan Gattis, broke his fall and helped push him back over the railing and onto the field, but Davis’ hurried throw home was off target as Tapia slid into the plate.

Colorado grabbed an early lead when Gonzalez led off the second with a home run, his 12th of the season.

The Astros answered in the fourth to go in front 2-1. Bregman walked ahead of Altuve’s run-scoring double. Altuve went to third and Yuli Gurriel reached on first baseman Ian Desmond’s fielding error before Altuve came home with the go-ahead run on Marwin Gonzalez’s groundout.

Both starters pitched well but did not figure in the decision.

Gray allowed one hit and two runs — one earned. Charlie Morton gave up one run on four hits in six innings for Houston.

Rockies: Chad Bettis threw a light bullpen. He’s expected to make a second rehab start this weekend for Triple-A Albuquerque. The first was last Saturday. He threw 70 pitches in four innings but had to stop when a blister on his right middle finger bothered him.