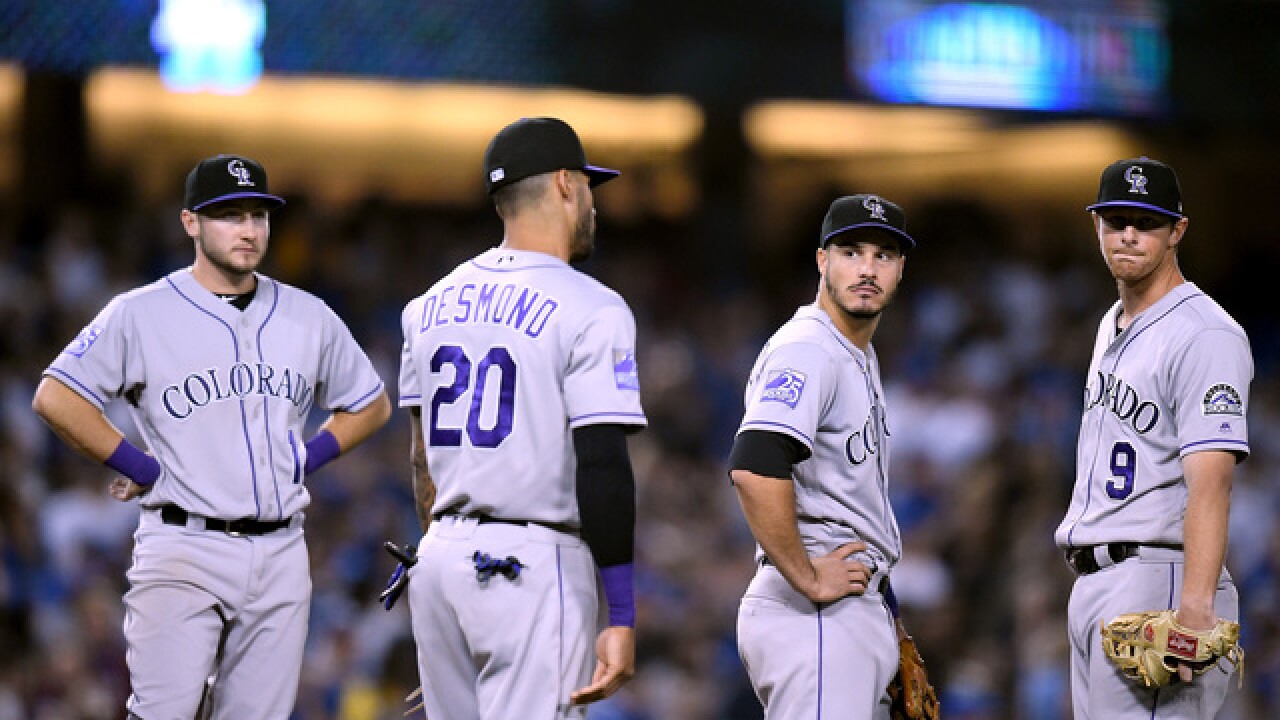 Image copyright 2018 Getty Images. All rights reserved. This material may not be published, broadcast, rewritten, or redistributed.
Harry How
<p>LOS ANGELES, CA - SEPTEMBER 19: Garrett Hampson #1, Ian Desmond #20, Nolan Arenado #28 and DJ LeMahieu #9 of the Colorado Rockies, react during a pitching change, after a three run home run from Yasiel Puig #66 of the Los Angeles Dodgers to take a 5-2 lead during the seventh inning at Dodger Stadium on September 19, 2018 in Los Angeles, California. (Photo by Harry How/Getty Images)</p>

LOS ANGELES (AP) — Late September, a crucial series, and a postseason berth on the line. Yasiel Puig thrives in big-game situations, and once again he delivered.

Puig didn't start despite being on a tear at the plate. But he came off the bench to slug a tiebreaking, three-run homer in the seventh inningthat sent the Los Angeles Dodgers past the Colorado Rockies 5-2 on Wednesday night to increase their NL West lead to 2½ games.

Walker Buehler struck out a career-high 12 and the Dodgers completed a three-game sweep of the second-place Rockies, giving the five-time defending NL West champions their largest division lead this season. They outscored Colorado 16-6 in the series, with homers proving to be the difference in each game.

"It's impressive," manager Dave Roberts said of the sweep. "I believe our guys can sustain it."

The Rockies remained 1½ games behind St. Louis for the second NL wild card.

"Like I've said all along, I think this is going to come down to the end," manager Bud Black said. "I really do."

After falling into a 2-0 hole in a 36-pitch first inning, Buehler settled down and showed why he has become a dependable complement to Dodgers ace Clayton Kershaw. The rookie right-hander allowed three hits and one walk over six innings, and neither run he gave up was earned.

"I just slowed down a little bit," Buehler said. "The later you get in the year the bigger it all feels."

Puig's second career pinch-hit homer came off Scott Oberg (7-1) and ignited the crowd and his teammates, some of whom came out in front of the dugout to cheer. The always-excitable Puig raised both arms as he circled the bases.

"I saw his first swing and I saw him hit the top half of the ball," Oberg said. "I'm like, 'OK, it's probably a decent pitch to throw again.' Sitting on it. Put a good swing on it. Over the fence. That's it."

Puig is hitting .400 this month, with seven homers, nine runs and 14 RBIs. He hit five homers in two days recently.

The Dodgers showed off their depth in the seventh. After pinch-hitter Joc Pederson fouled out, Max Muncy drew a pinch-hit walk. Yasmani Grandal doubled to deep right field, moving Muncy to third and setting up Puig.

"This series was emblematic of our ballclub," Roberts said. "How many people had their hands in to help us win three ballgames."

Caleb Ferguson (7-2) got two outs and Kenley Jansen closed for his 36th save.

Buehler gave up a two-run single to Ian Desmond in the first after the pitcher made a run-saving throw to the plate when Gerardo Parra grounded into a fielder's choice.

Matt Kemp homered on the first pitch from Tyler Anderson in the second, giving the Dodgers seven players with 20 or more homers in a season for the first time in franchise history. That left them trailing 2-1.

Brian Dozier's RBI double tied the game 2-all in the fifth. Enrique Hernandez singled leading off and made a headfirst slide at the plate, with his feet barely eluding the tag of catcher Chris Iannetta.

Anderson gave up two runs and three hits in six innings. He struck out four and walked two.

The Dodgers went 12-7 against the Rockies this season and swept them twice. Colorado, which lost two of three at home to Los Angeles earlier this month, fell to 1-5 on its nine-game road trip.

Rockies: SS Trevor Story is receiving treatment for right elbow inflammation in Arizona, and the team is encouraged that he could return soon. Story might participate in some baseball activities at the club's spring training facility in Phoenix, where the Rockies are headed next to play the Diamondbacks.

Things aren't going as well for Puig at home. TMZ reported that the slugger's home in the San Fernando Valley was broken into for the fourth time on Tuesday night when he was at the ballpark.

"I (did) not sleep too much yesterday," Puig said, without offering details about the incident.

Previous break-ins occurred in March 2017, during Game 7 of last year's World Series and then last month.

With three home games left in the regular season, the Dodgers are 42-36, their worst record in LA since going 42-39 in 2011. Their latest win allowed them to clinch a 13th straight winning season at Chavez Ravine.

Charlie Blackmon singled in the first, extending his hitting streak to 12 games, the longest active steak in the majors. He's hitting .390 with nine runs, five doubles, four homers and eight RBIs since Sept. 8.

Rockies: Off on Thursday before sending RHP German Marquez (12-10, 3.96 ERA) to the mound against third-place Arizona.

Dodgers: After an off day Thursday, LHP Rich Hill (9-5, 4.02) starts the opener of a three-game series against the last-place Padres.