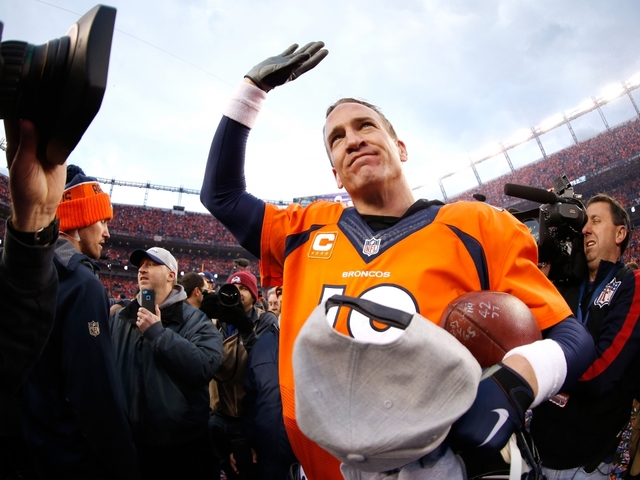 <p>Denver Broncos quarterback Peyton Manning is set to retire from football, which means all of his historic stats will now be set in stone.&nbsp;</p><p>&quot;We&#39;ve got the greatest fans out here right now,&quot; Manning said at the Broncos&#39; Super Bowl victory celebration in Denver. &quot;These fans have been great all season long.&quot;</p><p>As Manning exits, what might be the biggest part of his legacy is the staggering amount of records he leaves behind.</p><p>Lets start with the basics.&nbsp;<a href="http://www.sbnation.com/nfl/2014/10/19/7010081/peyton-manning-nfl-record-list-most-touchdowns-509" target="_blank">No one has thrown for more yards</a>&nbsp;than Manning in NFL history both in a single season and across a career. The same goes for passing touchdowns.</p><p>Manning also tops record books&nbsp;<a href="http://www.usatoday.com/story/sports/nfl/2016/03/06/peyton-manning-retires-colts-broncos-mvp-super-bowl-record-book/80244254/" target="_blank">for regular-season wins by a quarterback</a>, though he shares that mark with Brett Favre. But when you factor in the playoffs, Manning pulls away in first with a nice round total of 200.&nbsp;</p><p>This makes sense given Manning has made the playoffs 15 times, which happens to be&nbsp;<a href="http://espn.go.com/blog/denver-broncos/post/_/id/16306/there-are-some-passing-records-peyton-manning-wont-reach" target="_blank">more than any other quarterback in history</a>.&nbsp;</p><p>Mannings records arent just about piling up stats they extend to clutch performances as well. Manning is the NFLs all-time leader in come-from-behind wins and game-winning drives.&nbsp;</p><p>There are always NFL fans that will bring up Mannings lack of postseason success amid all these regular-season numbers. But after his second Super Bowl title, hes now got more rings than Brett Favre, Kurt Warner or Dan Marino.&nbsp;</p><p>Plus, Manning is the&nbsp;<a href="http://www.foxsports.com/nfl/story/denver-broncos-peyton-manning-super-bowl-two-different-teams-020716" target="_blank">only starting quarterback ever</a>&nbsp;to win a Super Bowl title with two different teams.&nbsp;</p><p>All together, its not the worst haul after 18 seasons in the NFL for the five-time MVP. That, by the way, is a record.&nbsp;</p><p><i>This video includes clips from&nbsp;</i><i><a href="http://www.thedenverchannel.com/sports/super-bowl/watch-again-denver-broncos-super-bowl-victroy-rally-highlights" target="_blank">KMGH</a></i><i>,&nbsp;</i><i><a href="https://www.youtube.com/watch?v=P35T7WGu9i0" target="_blank">Nationwide Insurance</a></i><i>&nbsp;and&nbsp;</i><i><a href="https://www.youtube.com/watch?v=YDCImtilWTU" target="_blank">NBC</a></i><i>&nbsp;and images from Getty Images.</i></p> Omaha may not have an NFL team but that hasn't kept it from making pro football headlines.

For years, NFL quarterback Peyton Manning has called out "Omaha" at the line of scrimmage. That all is about to come to an end as the five-time MVP made his retirement official on Monday.

In typical Manning style, he didn't ride away without one last shout-out to the Big O.

In his retirement press conference, he ended by saying "I had great coaches and players, it wouldn't have been possible without that." Manning said. "So, Omaha!".

Manning is known for using the city's name as a call during games, including the last time his team was headed to the Super Bowl in 2014.

After those 2014 playoff games when he was heard shouting "Omaha" dozens of times, Manning explained himself. Sort of.

"I know a lot of people ask what Omaha means," he said at a news conference at the time.

"Omaha is a run play, but it could be a pass play or a play-action pass, depending on a couple things: the wind, which way we're going, the quarter, and the jerseys that we're wearing. It varies, really play to play. So, there's your answer to that one."

Reggie Wayne explained it means Manning is going the other way. "If it's a run to the right, if it's a dive to right, Omaha is going to be dive left."

What does "Omaha" really mean?

The Nebraska city has had its fair share of fun as the "Omaha" line call became a common sports reference. Omaha Steaks even donated a $1,000 every time Manning made the reference during Super Bowl 50.

It looks like it may be time for the Omaha Convention Bureau to start searching for a new representative on the gridiron.