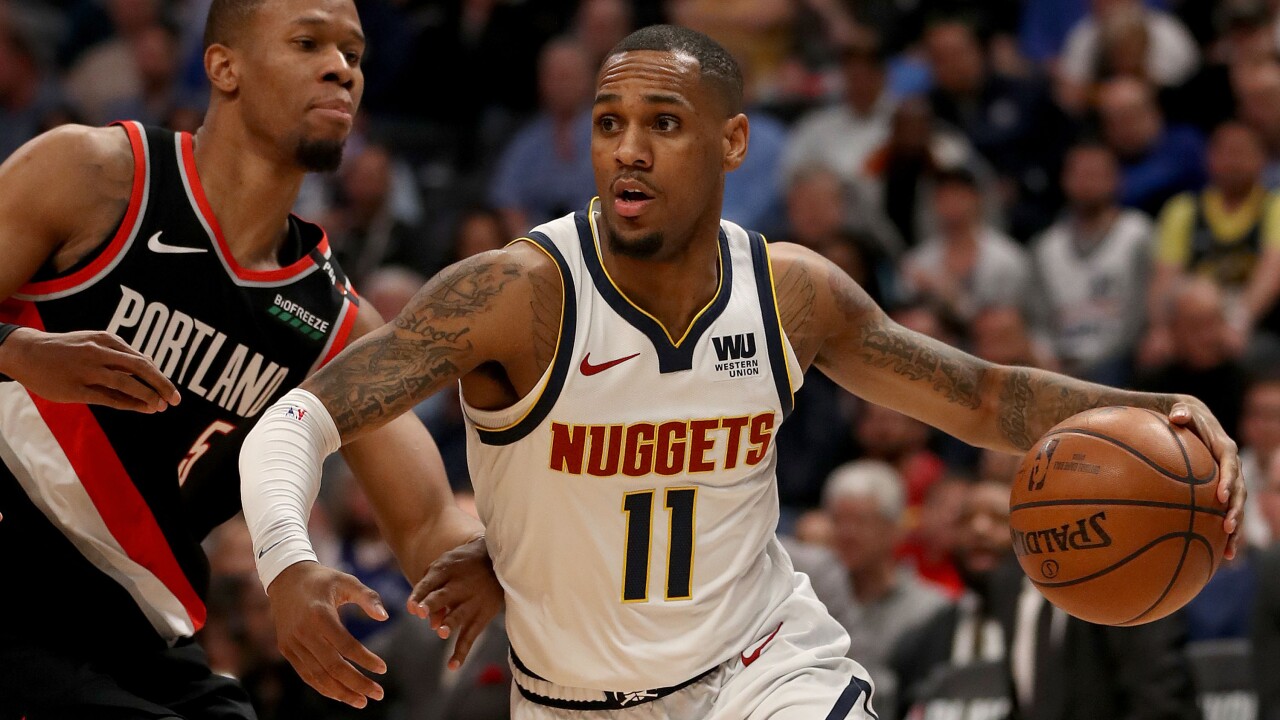 Matthew Stockman/Getty Images
DENVER, COLORADO - APRIL 29: Monte Morris #11 of the Denver Nuggets drives against Rodney Hood #5 of the Portland Trail Blazers in the second quarter during Game One of the Western Conference Semi-Finals of the 2019 NBA Playoffs April 28, 2019 at the Pepsi Center on April 29, 2019 in Denver, Colorado. NOTE TO USER: User expressly acknowledges and agrees that, by downloading and or using this photograph, User is consenting to the terms and conditions of the Getty Images License Agreement. (Photo by Matthew Stockman/Getty Images)

Lillard, who struck for 50 points, including a 37-footer at the buzzer to oust Oklahoma City in five games, missed 8 of 12 3-point attempts and Gary Harris blocked his 3 from behind in the closing minute to keep the Trail Blazers from closing in.

Jamal Murray added 23 points for Denver, which was making its first appearance in the second round in a decade, and Paul Millsap scored 19.

Game 2 is Wednesday night at the Pepsi Center.

Back-to-back layups by Lillard pulled Portland to within five points with nine minutes left, but Jokic sank a pair of free throws off CJ McCollum's flagrant foul sandwiched by a pair of dunks by Mason Plumlee as Denver pushed its lead back to double digits at 107-96.

Portland never got much closer.

Denver was coming off a 90-86 win over San Antonio 48 hours earlier, their first Game 7 victory since May 3, 1978, against Milwaukee. The Trail Blazers, who are in the playoffs for the sixth straight season, had nearly a week off after dispatching Oklahoma City in five games to advance for the first time in three years.

Yet, the Nuggets had the energy at altitude and won the fourth time in five games.

The Trail Blazers did get a boost from Kanter, who separated his left shoulder in Game 5 against the Thunder. He had 14 points by halftime when Portland trailed 58-55.

Kanter, who signed with Portland after being waived by the Knicks following the trade deadline, was originally a backup to starter Jusuf Nurkic, but his role was magnified when Nurkic broke a leg March 25. Kanter averaged 13.1 points and 8.6 rebounds in 23 games down the stretch, then put up 13.2 points and 10.2 rebounds in the first round.

Nuggets coach Michael Malone said before tip-off he was hopeful that gave his young team some mettle.

"Knowing we can be down 2-1 and a lot of people had written us off as a bunch of frauds and to come back win the last three out of four, that's got to give you confidence," Malone said. "Game 2 at home was a must-win; Game 4 on the road was a must-win, and obviously Game 7, we know what those are all about. I take so much pride and joy in thinking about all the young guys that grew up in that first round. So now we have to do it all over again."

Jokic, who averaged 23.1 points, 12.1 rebounds and 9.1 assists in the first round against San Antonio, made all 12 of his free throws and added nine rebounds and six assists.

Denver: The Nuggets were coming off a 2-for-20 performance from 3-point range Saturday night. ... The Nuggets are 4-1 at the Pepsi Center in the playoffs after going an NBA-best 37-4 at home during the regular season. ... Denver was 27 of 31 from the free throw line.

The Blazers and Nuggets are meeting for a third time in the postseason, with both winning one series. Denver beat Portland 3-1 in the first round in 1986, while Bill Walton and Maurice Lucas led the Blazers to a 4-2 series win in 1977 on their way to an NBA title.

HOW LONG OF A WAIT?

Malone and Colorado Avalanche coach Jared Bednar promised to meet for a steak after their seasons are over. It could be a while, though. Both teams are in the second round of the playoffs, marking the first time both have made it to the second round in the same season since the Avalanche moved to town before the 1995-96 season.

"It's an exciting time to be a Colorado sports fan," said Bednar, whose Avs are tied 1-1 in their best-of-7 series with San Jose. "Everyone is excited about it. ... It's a fun spring."

Asked if he hoped to meet up with Malone in, say, June, Bednar laughed.