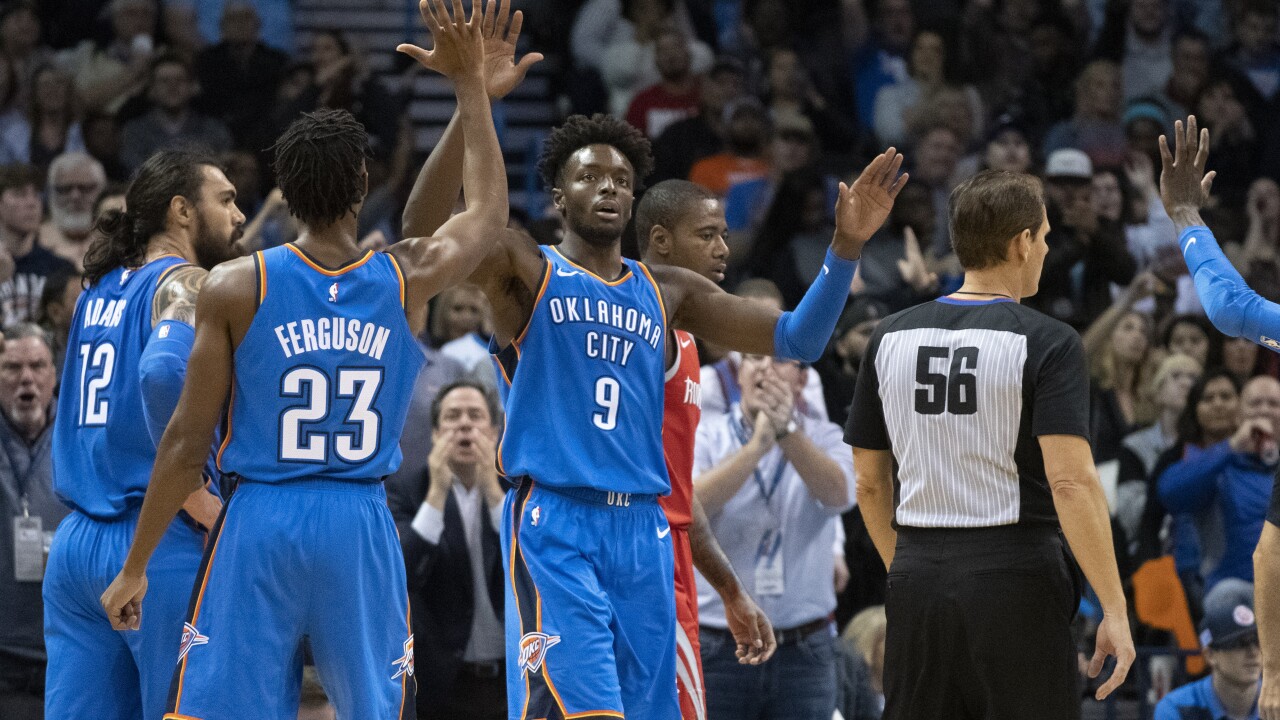 Copyright Getty Images. All Rights Reserved.
J Pat Carter/Getty Images
OKLAHOMA CITY, OK - NOVEMBER 8: Jerami Grant #9 of the Oklahoma City Thunder celebrates after scoring agains the Houston Rockets during the second half of a NBA game at the Chesapeake Energy Arena on November 8, 2018 in Oklahoma City, Oklahoma. NOTE TO USER: User expressly acknowledges and agrees that, by downloading and or using this photograph, User is consenting to the terms and conditions of the Getty Images License Agreement. (Photo by J Pat Carter/Getty Images)

DENVER (AP) — Jerami Grant gives Denver another power forward who can do a little bit of everything.

The Oklahoma City Thunder obtained yet another first-round pick, which allows them to do a little bit of anything.

The Nuggets bolstered their front court by acquiring the 25-year-old Grant from the Thunder on Monday for a 2020 first-round pick, two people familiar with the situation told The Associated Press on condition of anonymity because the trade hasn't been approved by league officials. ESPN first reported the deal.

The Nuggets formally announced the deal Monday afternoon in a news release.

It's an additional first-round selection for the Thunder, who are in line for at least four more assuming the blockbuster deal that sends Paul George to the Los Angeles Clippers goes through. It would also give Oklahoma City the rights to as many as 13 first-round picks over the next seven drafts.

Originally a second-round pick by Philadelphia in 2014, Grant — the son of longtime NBA player Harvey Grant — has taken off since being sent to the Thunder in a 2016 deal.

"I think it's one of the best things that could have happened to my career, just getting traded here from Philly. Just the opportunity here," he said at his exit interview in April. "It was an opportunity in Philly as well, but the opportunity here to play on a great team, play in a great organization like this, it was __ I think it was huge for me and my career, just in my development. I've gotten so much better since I got here."

One of his biggest supporters has been George, who's about to be sent from Oklahoma City to the Clippers in a massive trade, and where he's set to join forces with NBA Finals MVP Kawhi Leonard once all the paperwork is straightened out.

"J.G. is one of those special players I think that you need on a team to make a team special," George said before last season. "Every team needs that one guy that can do a little bit of everything, and J.G. is that guy. You can plug J.G. in at any spot, and he's going to come out with some special plays for us."

The Nuggets are coming off a 54-28 season that earned them the No. 2 seed in the West behind All-Star big man Nikola Jokic. They haven't made any major splashes this offseason.

Instead, they're relying on team cohesion. That's why they brought back forward Paul Millsap, who recently had his $30 million option picked up. The team also agreed to a reported $170 million extension for point guard Jamal Murray.

Denver boasts a young nucleus that includes Michael Porter Jr., the No. 14 selection in 2018 who sat out last season as he recovered from another back surgery. Porter was set to suit up during the Summer League in Las Vegas before suffering a knee injury that is not considered serious.