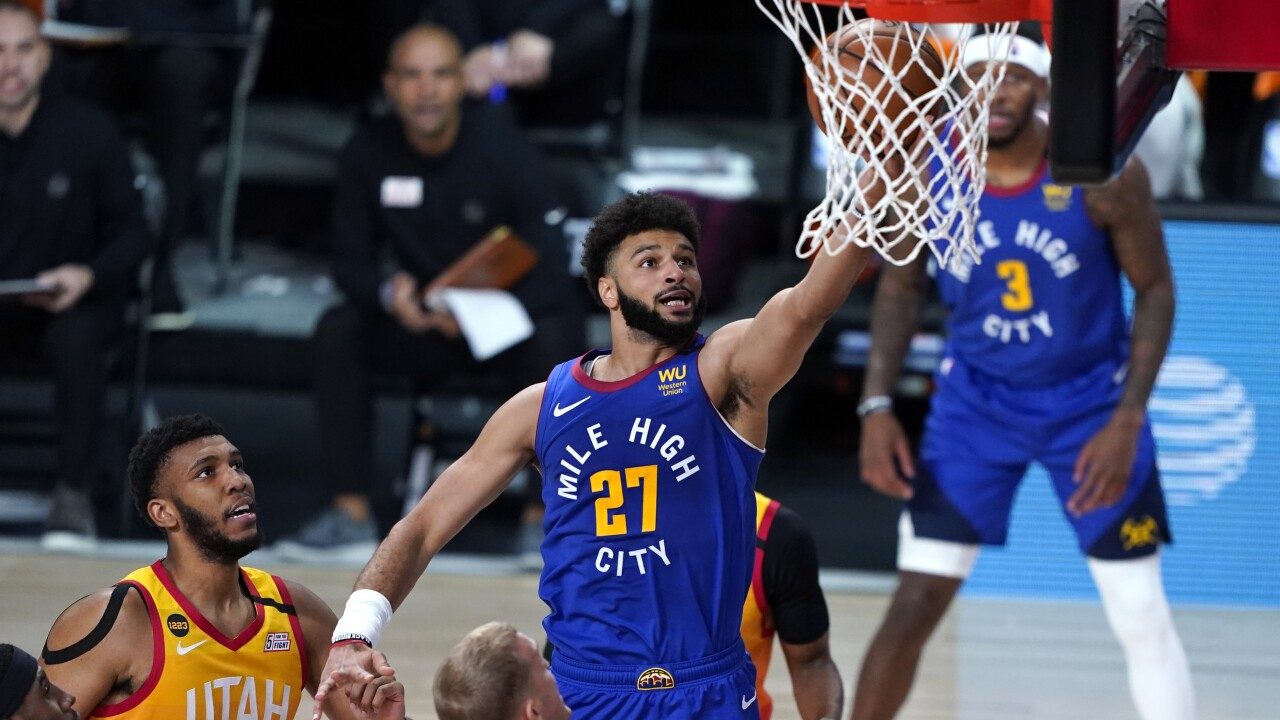 Ashley Landis/AP
Denver Nuggets' Jamal Murray (27) goes up for a shot against the Utah Jazz during the first half of an NBA basketball first round playoff game Sunday, Aug. 30, 2020, in Lake Buena Vista, Fla. (AP Photo/Ashley Landis)

DENVER — Jamal Murray put on show in the Nuggets' Game 6 win over Utah, dropping 50 points, including five three-pointers in the fourth quarter.

With Denver facing elimination, Murray's performance was among the best of all-time from a Denver athlete, in any sport. But Murray's whole series has been a clinic, and the Nuggets have needed every ounce of it to hang with Donovan Mitchell and the Jazz.

Ahead of Game 7 — with coverage scheduled to start at 6 p.m. on Denver7 — here are seven eye-popping stats from Murray this postseason, via the NBA and Basketball Reference.

• In the last three games, Murray recorded at least 40 points, five rebounds and five assists. The only other player to do that in the playoffs: Michael Jordan.

• For the objective viewer, Murray's performance has only been made better by his duel with Mitchell. The two young stars became only the fourth and fifth players, ever, to have two 50-point games in the same postseason. Michael Jordan, Wilt Chamberlain and Allen Iverson were the others.

(And Nuggets fans, try not to think about this too much, but remember the 2017 draft? Yes, Denver picked Mitchell, only to trade him to Utah for Trey Lyles and the 24th pick, Tyler Lydon)

• Murray's heroics have come when the Nuggets needed him the most: In Denver's three wins this series, Murray is averaging 19 points in the fourth quarter or later. That's 20 in Game 1 (including overtime), 16 in Game 5, and 21 in Game 6 (which included 5-for-5 shooting on three-pointers.

• Nuggets fans know how good Murray has become over the last three seasons. But his shooting numbers this series show how big of a leap he's taken in the playoffs.

In the Jazz series, Murray is shooting 58.5% from the field and 57.4% from three-point range. His season average from the field was 43.9% and his average from deep was 35.8%. He's seen both a jump in efficiency and volume — compared to the regular season, when averaged 5.5 three-point attempts per game, he's taking nine per game against the Jazz.

• Murray's Game 6 saw him become only the second player in NBA history (joining Charles Barkley) to score 50 points on 70% shooting in a playoff game. He was 17-for-24 from the field, including 9-for-12 from three-point range.

Last night, Jamal became the first player to drop 50+ points on 70%+ shooting in a playoff game since Charles Barkley in 1994.

• It doesn't take much analytics to understand how good Murray has been this series. But it's still interesting. For his career, Murray has carried a player efficiency rating, or PER, of 15.6. The PER measures a player's per-minute production, and the league average is 15. For the Jazz series, Murray has a PER of 36.8.

• If all goes as planned, Murray and the Nuggets will be a regular in the playoffs, so this number could balance out. But, as the Nuggets team website noted, Murray, through 20 career playoff games, is averaging 25.1 points per game — good for 21st all time, a spot behind Russell Westbrook.