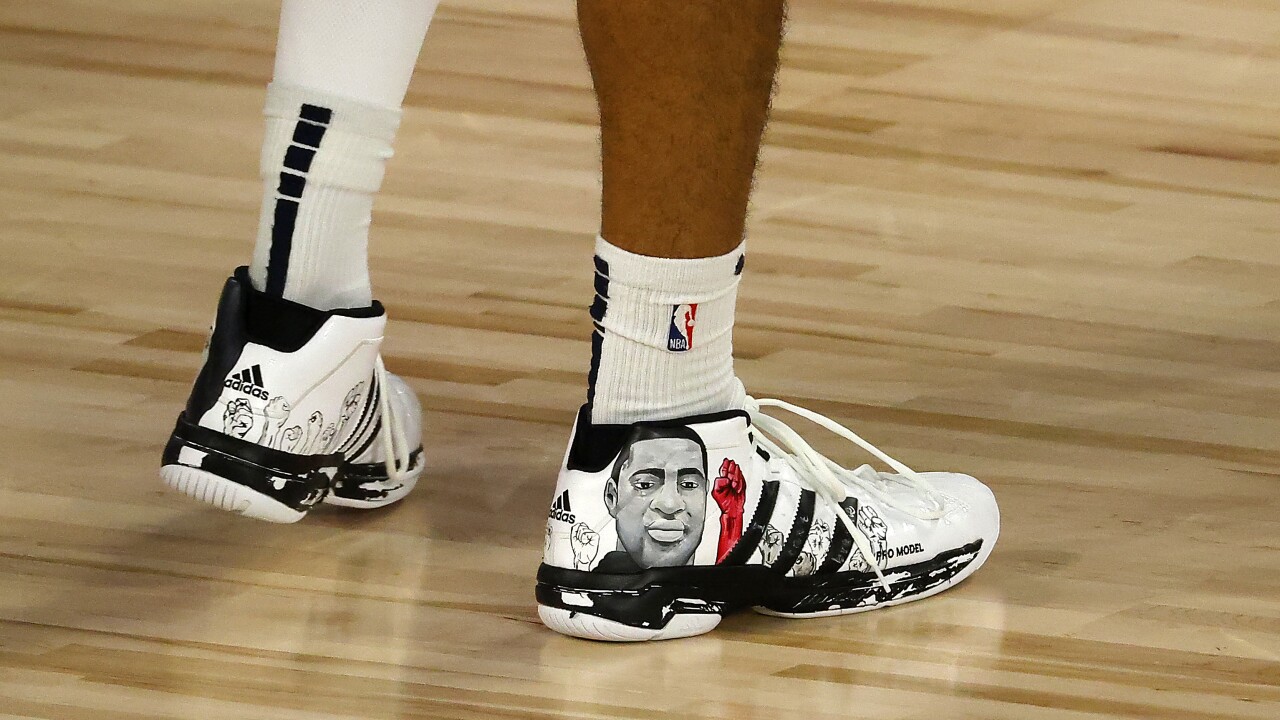 (Copyright 2020 The Associated Press. All rights reserved. This material may not be published, broadcast, rewritten or redistributed.)
Mike Erhmann/AP
The shoes of Denver Nuggets' Jamal Murray are seen during the second quarter of Game 5 of the team's NBA basketball first-round playoff series against the Utah Jazz, Tuesday, Aug. 25, 2020, in Lake Buena Vista, Fla. (Mike Ehrmann/Pool Photo via AP)

DENVER – The Nuggets will not play the Utah Jazz Thursday afternoon for Game 6, though the NBA Playoffs will likely continue, players and the NBA said Thursday.

“There is a videoconference call meeting scheduled later this afternoon between a group of NBA players and team governors representing the 13 teams in Orlando, along with representatives from the National Basketball Players Association and the league office and NBA Labor Relations Committee Chairman Michael Jordan, to discuss next steps,” Bass said in a statement.

The decision came after a meeting among players Thursday morning in Florida that was held after the Milwaukee Bucks did not take the floor for their Game 5 Wednesday night against Orlando over the police shooting of Jacob Blake in Kenosha, Wisconsin – the latest police shooting of a Black man in America.

After the Bucks made their decision, the other games that had been scheduled for Wednesday night were postponed and are set to be rescheduled.

ESPN’s Adrian Wojnarowski first reported Thursday morning that Thursday’s games were postponed but that the players had decided to resume the playoffs.

The Nuggets tweeted support for the teams’ decisions on Wednesday and a message calling for “Justice for Jacob” that contained email addresses and phone numbers for Kenosha prosecutors and city officials, saying, "This is about much more than basketball."

The Nuggets had been set for a 2 p.m. MT Game 6 tip-off on Thursday.

"We have so much work to do outside of the game of basketball as a community and as a nation, and I hope we can get to a place where we don't see this violence continue to repeat itself time and time again," Nuggets head coach Mike Malone said earlier this week.

Several Nuggets players voiced support for the strike on Wednesday.

“WE DEMAND JUSTICE!!!” Nuggets star Jamal Murray tweeted Wednesday. He wore shoes bearing the images of George Floyd and Breonna Taylor during Game 5 of the series.

“It’s a difference between them hearing us and them listening! Time for sum to shake,” said PJ Dozier.

“Realizing the stuff going on in the world is way bigger than basketball,” said Michael Porter Jr. “For us, I feel like people look up to us, when we talk about these things, it’s good for the world to realize how much it means to us too.”

The Denver Broncos canceled practice Thursday after a two-hour meeting. Some Broncos players stayed at the facility and discuss social justice issues on Thursday, continuing talks that began as a team in late May.