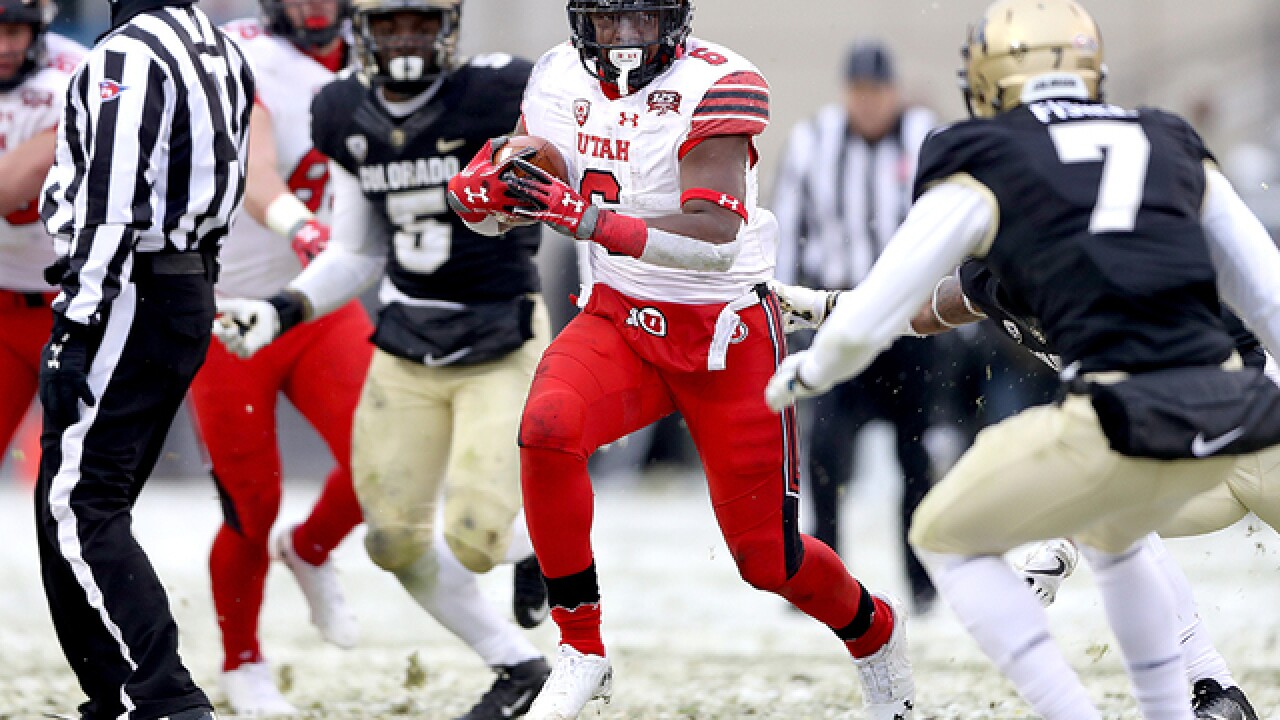 Copyright 2018 Scripps Media, Inc. All rights reserved. This material may not be published, broadcast, rewritten, or redistributed.
Matthew Stockman
<p>BOULDER, CO - NOVEMBER 17: Armand Shyne #6 of the Utah Utes carries the ball against the Colorado Buffaloes in the third quarter at Folsom Field on November 17, 2018 in Boulder, Colorado. (Photo by Matthew Stockman/Getty Images)</p>

BOULDER, Colo. (AP) — Jason Shelley threw for 221 yards and two touchdowns in the snow, leading No. 21 Utah to a 30-7 win over Colorado on Saturday and slinging the Utes closer to their first Pac-12 title game appearance.

The Utes (8-3, 6-3) can clinch their first Pac-12 South title if Arizona State loses at Oregon later Saturday or if the Sun Devils lose to Arizona next week.

A sixth consecutive loss for the Buffaloes (5-6, 2-6) capped a week in which athletic director Rick George said he hadn’t made any decisions regarding coach Mike MacIntyre’s employment amid a news report that his job was in jeopardy.

MacIntyre brought a photo of a bison heading into a storm into his weekly news conference, a metaphor that was both apt and prescient — freezing drizzle ahead of a snowstorm turned the first half of the 500th game played at Folsom Field into a sloppy mess that resulted in a 7-7 first-half yawner.

While the Buffs continue to stagger through their worst injury epidemic in 33 years, the Utes won for the second straight week after losing QB Tyler Huntley and star running back Zack Moss to season-ending injuries.

Colorado, which started out 5-0, fell to 0-9 over the last two years when playing for bowl eligibility.

Despite losing star defender Chase Hansen on a targeting call in the first quarter, the Utes stymied Colorado’s offense even as quarterback Steven Montez had his full complement of receivers available for the first time in two months.

The Buffs managed just 19 yards in the third quarter, when the Utes took control with a 17-0 run.

“It was just better execution,” Whittingham said. “We did have some guys change cleats in the second half. ... But, no, nothing major, nothing drastic as far as wholesale change.”

Matt Gay gave Utah its first lead with a 33-yard field goal, Shelley threw a 47-yard TD to fellow freshman Jaylen Dixon and Armand Shyne ran it in from a yard out to make it 24-7.

Travon McMillian gave the Buffaloes a 7-0 lead with a 13-yard touchdown run on the same drive Hansen was ejected for a helmet-to-helmet hit on Montez — a ruling that surprised players, coaches and Pac-12 Network broadcasters.

Strong safety Marquise Blair’s interception on Colorado’s next drive turned momentum and four plays later, Shelley hit Samson Nacua from 10 yards out to tie it at 7.

Held to 84 yards on 13-of-22 passing, Montez left the game in the second half with a sprained right ankle.

Utah: After a slow start, the Utes flexed their muscles in the snow and rallied around the loss of Hansen to win for the second straight week behind backups at QB and RB.

Colorado: Fast starts have not been the problem for Colorado; it’s crumbling after the break. They’ve managed just one field goal in the fourth quarters of their last five games. Yet they can still salvage their season and maybe MacIntyre’s job with a win at Cal next weekend.

The Utes are a dangerous, deep team that will stay in the AP Top 25 as they continue rolling toward their 13th bowl under Whittingham, whose 11-1 bowl record is the best in NCAA history.