Nebraska coach says play that injured QB might have been dirty 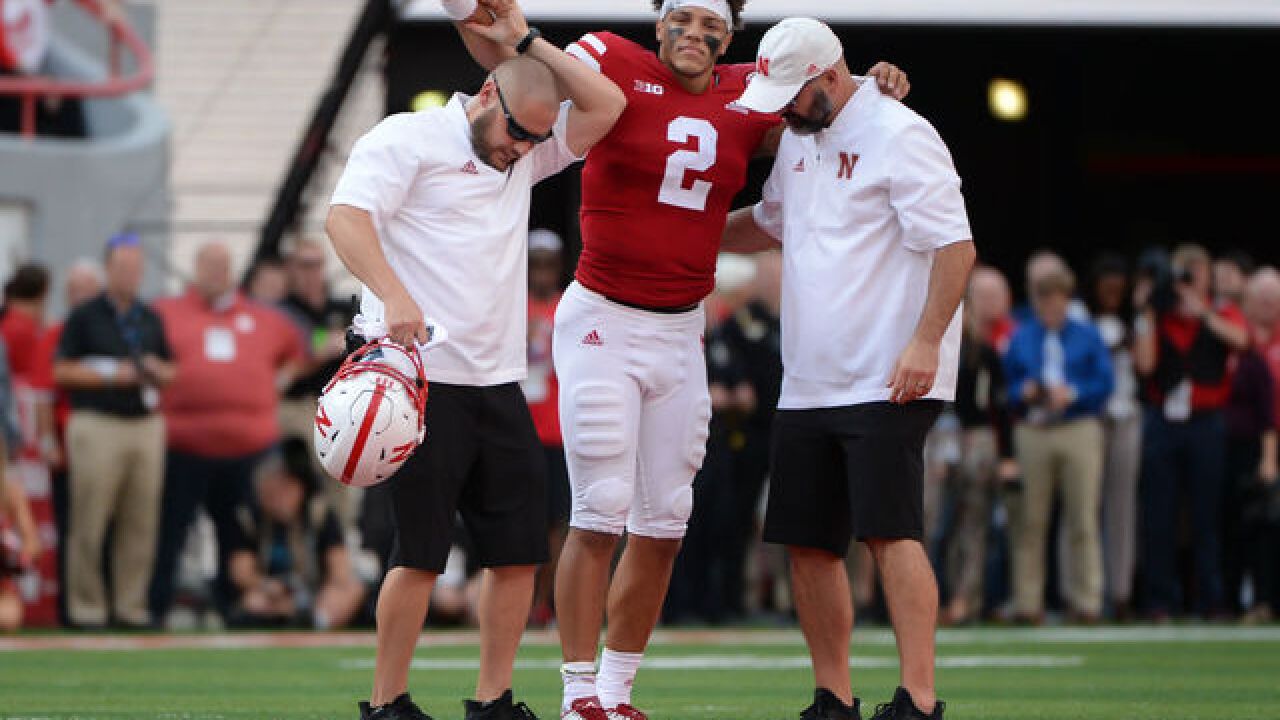 2018 Getty Images
Steven Branscombe
<p>LINCOLN, NE - SEPTEMBER 08: Quarterback Adrian Martinez #2 of the Nebraska Cornhuskers walks off the field in the fourth quarter against the Colorado Buffaloes at Memorial Stadium on September 8, 2018 in Lincoln, Nebraska. (Photo by Steven Branscombe/Getty Images)</p>

LINCOLN, Neb. (AP) — Nebraska quarterback Adrian Martinez is day-to-day with a right knee injury and it might be close to game time Saturday until it is known if he can play against Troy.

Martinez was hurt on a short run with about 4 minutes left in the 33-28 loss to Colorado. Coach Scott Frost wouldn't disclose details about the injury Monday other than saying Martinez didn't sustain ligament damage.

"We got about as good a news off the examination as we could have gotten," Frost said. "He's a little sore but doing a lot better today than I expected, and I don't think it will be very long."

Sophomore walk-on Andrew Bunch will have his practice repetitions increased this week in case he's needed to start against the Trojans (1-1). True freshman walk-on Matt Masker would be Bunch's backup.

The Huskers took a major hit in quarterback depth the last week of August when Tristan Gebbia, who lost the QB competition to Martinez, transferred to Oregon State. Frost said a player from another position might be called on to take snaps in practice so a third quarterback is available if Martinez is out.

Nebraska has sent video of the play on which Martinez was injured to conference officials for review. Frost said his view of the play from the sideline plus video not available to the public made him suspect the injury occurred in the tackle pile.

Outside linebacker Jacob Callier made the initial hit. Frost wouldn't say who he thought injured Martinez.

"You never want to think anybody on a football field would intentionally try to hurt someone else," he said. "And nobody except someone that does that knows what the intentions were. I will tell you we have an angle that doesn't look very good. So we've turned the play in to the Big Ten and the Pac-12, and we'll see where it goes from there."

A Colorado athletic department spokesman had no immediate comment.

Bunch, who redshirted last year after transferring from Scottsdale (Arizona) Community College, played the Huskers' last series-and-a-half against Colorado. He moved the Huskers to the CU 20 before overthrowing JD Spielman in the corner of the end zone on the final play.

"Bunchy, when he's gotten his opportunity, has done a great job," Frost said. "I was pleased with how he performed when he came in. We're not going to change because of who he is. We'll try to alter it a little to make sure he's comfortable with what we have in, but there's not going to be wholesale changes. He knows our stuff and does a good job running it."

Running back Devine Ozigbo said Bunch has the full backing of the team.

"I think Andrew is a playmaker," Ozigbo said. "We have a lot of confidence in all of them. I really think Andrew can get the job done if it's on him this week. We're going to let him ride, and I feel he's going to impress a lot of people."